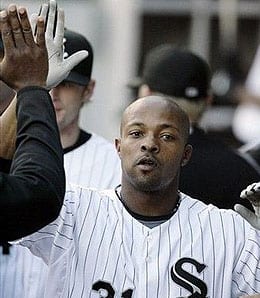 Can the White Sox get back to the playoffs with Dewayne Wise batting leadoff?

The Chicago White Sox enjoyed a great recovery last season, riding a strong rotation and great team power to 89 wins and the AL Central Division Crown. They put up little resistance to eventual AL Champion Tampa Bay in the playoffs, but no one can say that 2008 wasn’t an unqualified success for the Pale Hose.

But there are plenty of question marks facing this team heading into 2009, and none of them have anything do with the FBI’s investigation of Chicago’s activities in the Dominican Republic.

For starters, can Dewayne Wise – he of the career .254 OBP – truly be effective as a lead-off hitter? Sure, he made a bit of a splash in June, but he’s really not a very good player and at the age of 31, I don’t see much upside here. And not that he’s a much more exciting option, but I’d like to see what Brian Anderson – the man who will share the CF job with Wise – can do with an extended look. At least Anderson may have some upside, even if he has yet to deliver on his once great promise. Then again, can a team with these two options in centrefield truly be a legitimate contender? Anderson spent more games in centre last season than any White Sox player, yet he was only a part-timer, and this is a situation that the White Sox failed to address properly this offseason. Will it come back to haunt them?

Fortunately for the Sox, they are in a division that will be extremely competitive, so it’s quite feasible that they could get back to the playoffs with less wins than they had in 2008. Minnesota will be right there again; you know that Cleveland and Detroit will be better, while Kansas City is likely poised to take the biggest leap forward. Things are going to be vise-like tight in the Central this season.

With Alexei Ramirez shifting to shortstop to replace the departed Orlando Cabrera, the club opened up a hole at second base. Chris Getz, a 25-year-old with all of 10 games big league experience, has been pegged to fill that gap. Sure, he had a nice season at Triple-A last year, is killing the ball this spring (.400) and many consider him a big time sleeper, but that gives the White Sox two unproven players at key positions on Opening Day.

Nick Swisher, who split his season between first base and the outfield, was dealt to the Yankees. Javier Vazquez was sent packing in a deal to Atlanta, and Joe Crede, Ken Griffey Jr. and Juan Uribe (in addition to O-Cab) all walked out the door as free agents. The Sox are going young instead, hoping that the 2007 version of Josh Fields will reemerge to replace Crede at third.

Another big question mark facing the White Sox is how the back end of the rotation will hold up. Mark Buehrle, Gavin Floyd and John Danks form a solid front three, but with Vazquez gone, the Sox are hoping Jose Contreras can bounce back from an injury-shortened 2008 and be effective. He’s already returned from his Achilles injury much sooner than anyone expected him to, but his health history makes him a serious risk. The No. 5 slot will be filled by Bartolo Colon, another aging arm who represents a major injury risk (not to mention a detriment to clubhouse chemistry when he gorges himself on the post-game buffet and leaves crumbs for the rest of the team). Expecting those two to take the hill 30 times each is akin to swinging at a Josh Beckett fastball while wearing a blindfold. If (when) one or both of these vets go down, the Sox will be forced to turn to Clayton Richard, who got cuffed around pretty hard in his first taste of the majors last season, or perhaps untested Jeff Marquez, the youngster acquired from the Yanks in the Swisher deal. Manager Ozzie Guillen likes that fact that Richard goes right after hitters and throws strikes, so I have no doubt that he’ll get his chances.

And then there’s Carlos Quentin. Can he repeat his unbelievable 2008 breakout campaign? He’ll need to stay healthy for starters, but betting on another 36-homer season isn’t wise. Temper your expectations and if you get more, call it gravy. Mmmm…gravy.

Everyone and his brother expects Ramirez to make a major leap forward this season, but I have a few concerns that I have already expressed, namely his batting eye. You can throw in the fact that he’ll be adjusting to a new position, although he did see a fair amount of action at short last year. Don’t get me wrong: I think Ramirez is a superb player, and I’d love to have him on my team. I just get the sense that he’s being overhyped.

No. 2 starter Floyd worries me to an extent as well. He won 17 games with a very nice 3.84 ERA, but did you see how many homers he gave up? Also, his K rate – while up slightly in 2008 – is nowhere near dominant. And his command slipped quite a bit last season. He has upside and can still get better, but not if those peripheral numbers don’t show marked improvement.

For my money, Danks’ improvements last season are much more sustainable, and at the age of 23, his upside is through the roof. What worries me, however, is the fact that his innings pitched jumped from 139 in 2007 to 195 last season. That’s a significant hike for a young arm, so keep an eye on his velocity and command this season. If either wavers (or both) it could be a warning sign.

The strength of this team should still be its pop. Even if Quentin doesn’t smack 36 homers again, Jermaine Dye, Jim Thome and Paul Konerko are all serious boppers. Ramirez supplies plenty of power from the middle infield, Fields hit 23 homers in just 100 games two years ago, and many think Getz could surprise people with his pop (he smacked 11 dingers with 24 doubles in 111 games at Triple-A last year). Hell, even good old dependable A.J. Pierzynski should check in with his customary 12 to 15 dingers.

By RotoRob
This entry was posted on Monday, March 30th, 2009 at 7:51 pm and is filed under BASEBALL, RotoRob, Team report. You can follow any responses to this entry through the RSS 2.0 feed. You can skip to the end and leave a response. Pinging is currently not allowed.