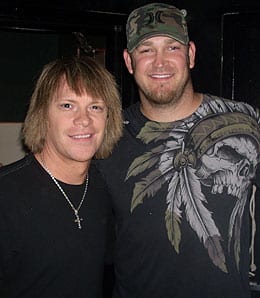 Brad Penny (right), when he’s not hanging out with Bon Jovi cover bands, is competing for the fifth starter job in Boston with Clay Buchholz.

The 2009 RotoRob MLB Draft Kit rages on ceaselessly, with yet another of the Top 10 Lists Fantasy Owners Always Wanted But Were Afraid to Ask For.

Fantasy baseball is all about projections. Almost every fantasy baseball web has a projection page and every year some stat nerd develops a new formula for player projections that make Einstein’s calculations on energy look like kindergarten mathematics. What they can’t predict, however, is injuries. You never know who is going to go down for an extended period of time, but you better have a list of guys who have the potential to break out if they get a chance. Here are some of mine.

1. Clay Buchholz, SP, Boston Red Sox: What a difference a year makes. Last year at this time, Buchholz was being hailed as the next great Sox pitcher. This season, thanks to a couple of signings, he’s not guaranteed a spot in the rotation. Buchholz has dominant stuff, but seemed to cave under the pressure last year. This offseason, the Red Sox went out and signed Brad Penny and John Smoltz to bolster their rotation. Therefore, Buchholz will probably only get a shot if several pitchers go down – which, if you think about it, is a strong possibility. Don’t be afraid to grab this guy and tuck him away for safe keeping.

2. Marlon Byrd, OF, Texas Rangers: Was David Murphy the real deal? Is Nelson Cruz, after his strong showing down the stretch, the man to finally get starter at bats? Throw in Josh Hamilton – never the picture of stability even though he’s become a star – and Hank Blalock, who pretty well has his own barstool at the DL, and you’ve got to figure Byrd has a chance to get starter-type at bats.

3. Brandon Wood, 3B/SS, Los Angeles Angels: Wood didn’t exactly make the most of his injury opportunity last year. If he does get another chance, he can ill afford a slow start because the Angels won’t have the luxury of being patient with him as they’re expected to be in the thick of the AL West race all year. Wood needs at bats at the major league level to see if he can hack it. He’s blocked at third base by Chone Figgins, who is the spark plug at the top of the lineup, and either Erick Aybar or Maicer Izturis (probably Aybar) at shortstop, both of whom are better fielders.

4. Jeff Clement, C, Seattle Mariners: Clement is blocked at catcher by Kenji Johjima’s contract (thank you, Bill Bavasi, ya hack) and Ken Griffey, Jr.’s aging body at DH. Clement has nothing left to prove in Triple-A, tearing up that level last year before getting called up to the big league club (as much as the Mariners are big league, I guess). Now he simply needs to get a shot to play everyday.

5. Jonny Gomes, OF, Cincinnati Reds: Gomes has big time power, he’s just never had a chance to prove what he could do as an everyday player. He’s been impressive this spring, but just making the club may not guarantee him tons of at bats. An injury in the outfield could clear the way for Gomes to get consistent playing time. If so, it’s sink or swim – show he can be a solid everyday player or fax that resume to the Fargo-Moorhead RedHawks.

6. Homer Bailey, SP, Cincinnati Reds: This former can’t miss prospect has missed big time so far. Now nobody asked me (come on Walt, return my calls), but I don’t think the Reds have too much to lose by letting Bailey chuck it every fifth day. As it is, he looks to be the sixth man in a five-man rotation. Cincy needs to find out what it has in Bailey, and it’s not going to do that by sending him to Triple-A or pitching him out of the pen.

7. Juan Pierre, OF, Los Angeles Dodgers: When Manny Ramirez finally signed with the Dodgers, Pierre went to the bench and took all his steals with him. You can’t steal second from the bench. He has limited appeal anyway due to his lack of being able to do anything but steal bases, so having him on the bench makes him little but a cheap source of steals – unless, of course, an injury opens up PT.

8. Ian Stewart, 3B, Colorado Rockies: Stewart has long been one of the top prospects in the Colorado system, but his development has been slower than expected. He officially arrived last year, putting up nice numbers in limited at bats. Unfortunately, there doesn’t seem to be a place for Stewart to play regularly. Probably any infield injury would get him into the lineup.

9. Jordan Schafer, OF, Atlanta Braves: Conventional wisdom has Schafer starting this season in the minors, but the kid has been tearing it up in Spring Training, leaving some to wonder if the future is now. Schafer is probably best known for his 50-game suspension for HGH last year which somewhat dimmed his status as a prospect. Don’t let that cloud your judgment. The guy did his time and came backing hitting. Schafer is a legitimate star prospect that can help your team if he gets a chance in Atlanta.

10. Josh Willingham, OF, Washington Nationals: Willingham isn’t flashy and he doesn’t put up eye-catching numbers. He just goes out there and puts up solid stats. Unfortunately, the off-season trade from the Marlins to the outfield heavy Nats killed his value. The only way this guy is going to see the field is if someone goes down and that’s a shame because he’s probably the most consistent outfielder on the team. The again, with Lastings Milledge and Elijah Dukes among those blocking Willingham, how long do you think it will be until some kind of legal issue takes one of those dudes out of the lineup and opens up PT?

By Todd Habiger
This entry was posted on Sunday, March 29th, 2009 at 11:04 am and is filed under 2009 RotoRob MLB Draft Kit, BASEBALL, Todd Habiger, Top 10 lists. You can follow any responses to this entry through the RSS 2.0 feed. You can leave a response, or trackback from your own site.