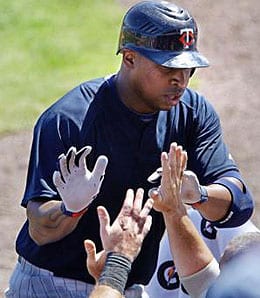 Delmon Young had his moments last year, but he’ll begin 2009 as a bench player.

The 2009 RotoRob MLB Draft Kit continues today with another of the now legendary Top 10 Lists Fantasy Owners Always Wanted But Were Afraid to Ask For. We’re almost done the next cheat sheet, our shortstop rankings, and continue to work on the Ultimate Master Keeper List. Other goodies coming soon include our Fifth Annual Top 40 Prospects list, a column about the key questions facing each team heading into 2009, plus a couple more Top 10 lists. Stay tuned!

1. Delmon Young, Minnesota Twins: Young has been a colossal disappointment since being taken first overall in the 2003 draft. Wasn’t he supposed to be a 40-homer major leaguer by 2005? Yes, the expectations were ridiculous, but he has yet to even reach 15 dingers in a season. And although Young made some progress last season – his first as a Twinkie – this can’t miss superstar we kept hearing about has yet to emerge. In fact, with the bounty of depth the Twins enjoy at OF/DH (with Jason Kubel, Michael Cuddyer, Carlos Gomez and Denard Span in the mix), Young finds himself as the odd man out to begin the season. But consider that he is still only 23 and is hitting with serious pop this spring and you have to know that Young will get his day in the sun before 2009 is up. Hello? Sleeper alert.

2. Rocco Baldelli, Boston Red Sox: It’s a bit of a risk putting Baldelli, who has all of 581 major league at bats in the past four years, this high on the list, but when you’re the insurance policy for WebMD Poster Boy J.D. Drew, there is always the potential for success. Then add to that the potency of the BoSox lineup and big things might be in store for Baldelli, who could flourish in Beantown as a veritable hometown boy (well, he’s from Rhode Island).

3. Reed Johnson, Chicago Cubs: With the money the Cubs have invested in Kosuke Fukudome, the former NPB star will be given plenty of rope in the battle to be the team’s centrefielder. So for now, Fukudome and Johnson will platoon, with the right-handed hitting Johnson being on the weak side of this equation. However, all Johnson has done in his career is perform beyond expectations. In barely over a half-season worth of at bats last year, he drove in 50 runs while hitting north of .300. If Fukudome is not up for the challenge, we may see a shift in PT at Wrigley.

4. Willie Harris, Washington Nationals: There’s no denying the Nats have a logjam in the outfield – at least until Elijah Dukes kills someone – but Harris can play all over the diamond (he started at five positions last season) and is a safe bet for 300-plus at bats. He boasts decent speed and pop, and that multi-positional eligibility is a Godsend in deep leagues where depth is at a premium.

5. Mark Teahen, KC – Teahen appears to be the odd man out in Kansas City following the off-season addition of Coco Crisp, but David DeJesus has trouble keeping himself in the lineup (as does Coco) and isn’t it about time for Jose Guillen to alienate his teammates and be traded by the deadline? I’m pretty sure it is. Note that KC is giving Teahen a look at second base this spring, but even if he sees time at the keystone corner this season, you’ve got to figure he’ll also be spelling the Royal flyhawks.

6. Juan Pierre, Los Angeles Dodgers: With the Dodgers boasting an outfield of Manny Ramirez, Matt Kemp and Andre Ethier, Pierre will be coming off the bench. He will log enough playing time to be a good source of 30-plus steals, but can’t be counted on to do much else. Still, if you need help in steals (and whoever doesn’t?), Pierre can still be an impact player in this category.

7. Ryan Freel, Baltimore Orioles: Freel falls into almost the exact same category as Pierre, but brings an injury risk to the table as well. However, he may have a higher upside than Pierre given that Felix Pie and Adam Jones – despite their immense potential – are still not established major leaguers, so a sluggish start by either of them could result in Freel seeing more action.

8. Chris Duncan, St. Louis Cardinals: The Cards are going with immensely talented prospect Colby Rasmus here, but Duncan has proven he’s still a capable major leaguer by smacking the ball around this spring like a man on a mission. He’s healthy after last season’s back woes, and let’s not forget that he smacked 22 homers in 280 at bats just two years ago, and is just now entering his power prime. If Rick Ankiel suffers another injury (likely) or if Ryan Ludwick fails to come close to his 2008 breakout (likely) or if Rasmus suffers from growing pains (likely), Duncan could get a chance to do some serious damage.

9. Marcus Thames, Detroit Tigers: You know he’s got the pop, and you figure between spelling the outfielders and spending some time at DH, Thames should be good for his typical 20 dingers. Besides, in case you hadn’t noticed, starting DH Gary Sheffield isn’t exactly the picture of good health at the age of 40.

10. Eric Byrnes, Arizona Diamondbacks: A lot of things have happened since Byrnes missed two-thirds of 2008 because of hamstring woes. Most notably to his situation, Conor Jackson shifted to the outfield and became a .300 hitter and Justin Upton arrived in The Show. Now Byrnes finds himself as the extra outfielder, just a season removed from 2007’s breakout campaign (does 20+ homers, 50 steals and 100+ runs sound familiar?). So unless Jackson is shifted to first base (currently occupied by Chad Tracy), Brynes doesn’t have a starting gig, with Chris Young occupying centrefield. But bear in mind that Byrnes is one of the highest paid Diamondbacks, so it would behoove the team to at least give him enough action to showcase him for a possible deal.