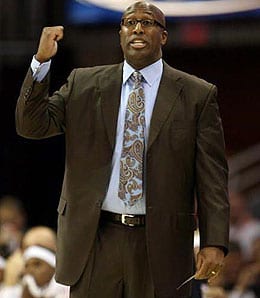 Mike Brown is the fourth youngest coach to guide his team to a 60-win season.

We’ve been so focused on the 2009 RotoRob MLB Draft Kit, that we’ve been remiss with our basketball coverage in the past couple of weeks. I thought I’d rectify that situation today by checking in on the NBA’s best team, the Cleveland Cavaliers.

The Cavs are simply unstoppable right now. Sunday afternoon, they kicked the shit out of the Dallas Mavericks, a team fighting to maintain its playoff spot, 102-74. Make that an even dozen straight wins for Cleveland, now five and a half games ahead of Orlando and Boston for the top spot in the East.

LeBron James got a (ho-hum) double-double and the Cavs not only reached 60 wins for the first time in franchise history, but set a new club record for consecutive wins in the process. The question that will soon face the Cavs, currently a game and a half ahead of the Lakers for the NBA’s top overall record, is whether getting the top seed is more important than getting King James some rest down the stretch. It’s a big consideration for his fantasy owners, as well.

Home court is huge for Cleveland. The Cavs are now 35-1 at The Q, but have yet to beat the Lakers, Magic or Celtics on the road this season. The other consideration here is that Cleveland went 0-7 when James sat last season.

The Cavs showed the ability to come back on Sunday. The Mavs built a 30-20 lead after one, and still were up by a bucket at the half. Then Cleveland exploded, outscoring Dallas in the third quarter by a 30-11 margin. Game over. It gets even scarier though: the second half margin was Cleveland 55, Dallas 25. Or how about Cleveland 82, Dallas 39? That was the score from the 10:13 mark of the first quarter onwards. Yikes.

Coach Mike Brown has become the fourth youngest coach in NBA history to guide his team to a 60-win season (in total, 61 teams have hit this mark). Pretty impressive stuff, but now Brown has to decide whether his team should look to match the NBA record 40-1 home season Boston holds or to rest key players with the bigger picture in mind. Then again, after getting knocked out by the Celtics in Game 7 in Boston last season, and three years ago falling to the Pistons in Detroit in Game 7, the Cavs may decide to go full throttle ahead and do whatever is necessary to secure that top seed. Almost more so than in any other sport, home advantage is king in the NBA.

By the way, this was the biggest beatdown Cleveland has laid on Dallas in 56 games. Man, have the Mavs ever fallen from grace. Their record against the elite teams (8-20 against clubs that are .600 or better) says it all.

The Cavs, meanwhile, are now 15-1 in March and 20-2 since the All-Star break. Talk about finishing strong.

Mo Williams’ sprained finger, suffered Friday night, was not a factor. After slumping offensively this week, he’s now put up back-to-back 22-point games, adding five dimes, two steals and committing just two turnovers Sunday. Mo’s enjoying his finest month of the season offensively, averaging 19.9 PPG despite seeing less touches than he had in February. The key for Williams this month has been his work from downtown – he’s averaging 3.3 treys per game in March. Overall this season, his PT is down, he’s averaging just 4 APG – too low for a starting PG – and his shooting percentage has dipped after last season’s career best showing (although he’s still among the best shooting guards in the game). Despite this, Williams is averaging a career-best 18 PPG this season, providing Cleveland with a much-needed secondary source of scoring behind James.

Zydrunas Ilgauskas bounced back from a bit of an offgame Friday with 14 points, nine board and no turnovers on Sunday, although he failed to block a shot after averaging three swats per game over the past three games. Big Z’s PT has been dropping the past couple of months, but he’s done a better job of getting to the line in March (although on Sunday, he failed to get to the charity stripe). Injuries have been a factor this season for Ilgauskas, and his overall PT (27 MPG) is at its lowest since 2001-02 as Cleveland tries to keep its veteran big man fresh for the playoffs. Again one of the better shooting centres in the game — the Big Z can still knock down that jumper – he’s suddenly stepped out beyond the arc this season and started to can the occasional trey. After hitting just five career three-pointers in his first 10 NBA seasons, Ilgauskas has nailed 14 of them this season, and is draining them at a 40 per cent clip. Not too shabby, big guy! His turnovers are down this season, but the fact is that at the age of 33, Big Z’s decline looks like it has begun.

If you’re in a deeper league, it may be time to start paying attention to Joe Smith, who enjoyed his finest game in this go around as a Cav, scoring 12 points and adding 13 boards, three assists and a block on Sunday. Damn, the old guy even canned his second trey of the season. Smith’s minutes are on the rise, and if he can regularly garner close to the 27 he played Sunday, he’ll be worth a look.

While the Cavs have dominated the East this season, the true measure of a contender is how they fare against the Western Conference teams. Well, after humiliating Dallas, Cleveland is now 25-4 vs. the West. Can you say Championship calibre?

The Cavs are always among the best in the league at taking care of the rock, averaging just 13 turnovers per game (eighth best in the association), but on Sunday, they put on clinic of how to protect the pumpkin with a mere five turnovers. James was particularly impressive in this department, playing 31 minutes without a single TO.

By RotoRob
Tags: NBA
This entry was posted on Sunday, March 29th, 2009 at 7:25 pm and is filed under BASKETBALL, NBA Today, RotoRob. You can follow any responses to this entry through the RSS 2.0 feed. Both comments and pings are currently closed.