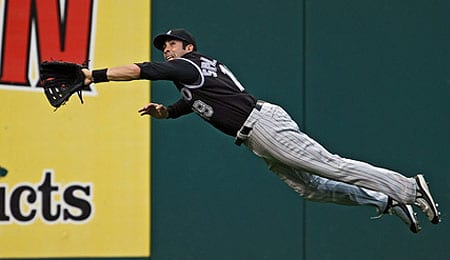 Ryan Spilborghs is finally going to get the chance to show what he can do as a full-time player, earning him a spot on our coveted Sleeper list.

The 2009 RotoRob MLB Kit continues today with another of the Top 10 Lists Fantasy Owners Always Wanted But Were Afraid to Ask For. Look for our Shortstop Cheat Sheet soon, plus we’re continuing to work on our Master Keeper List, and our Fifth Annual Top 40 Prospects List, plus plenty of other goodies.

Every year there are a slew of players that simply fly under the radar heading into the regular season. Looking back to last spring, those owners that were fortunate to have latched onto Cliff Lee, Edinson Volquez, Carlos Quentin, Ervin Santana, Alexei Ramirez, or Ricky Nolasco might have had very serious reasons to smile when the year end hardware was distributed. The 2009 season will be no exception to that rule. When reviewing my candidates for sleepers this year, I purposely left out possible closers. Team RotoRob’s newest member, Todd Habiger, nailed the many opportunities for fantasy owners in his recent article analyzing those potential closers in waiting. Great job, Todd! So without further ado, let’s take a look at some of those potential hidden gems for the upcoming season.

1. Ryan Spilborghs, Colorado Rockies, OF: Is Spilborghs the lead-off bat the Rockies are searching for in 2009? He is currently in a battle with Clint Barmes for the right to hit at the top of the Rox order, and with three homers, 13 RBI and a .390 BA this spring, is making a strong case. Last year in only 233 at bats, Spilborghs managed six homers, 36 RBI, and seven thefts with a solid .313 BA. Whether he’s batting first or eighth in the Rockie lineup, he should provide a decent BA with 15/15 potential, making him a solid option as your fifth outfielder in 2009.

2. Felipe Lopez, Arizona Diamondbacks, 2B: The 28-year-old Lopez is looking to sustain that great stretch run he had in 2008 with the Cards. Signed as a free agent this past offseason by the Diamondbacks, Lopez has the potential to be a good source of both runs and cheap speed with him batting at the top of the D-Back lineup. In leagues that use the 10-game qualifier for position eligibility, he will qualify at 2B, SS, 3B, and OF — a nice little bonus from a player that is currently being drafted as an end play in most formats.

3. Skip Schumaker, St. Louis Cardinals, 2B: Okay he’s no Adam Kennedy, but is that really such a bad thing? In 2008, Schumaker amassed eight HR, 46 RBI and eight thefts with a .302 BA in 540 AB. Even more impressive was the 87 runs scored. Anyone hitting in front of Albert Pujols should be a strong asset in the runs scored department. If Tony LaRussa exercises a bit of patience, Schumaker could provide a very solid option in 2009 as he transitions into the role of a full-time second baseman.

4. Anthony Reyes, Cleveland Indians, SP: Reyes has been a perennial sleeper candidate seemingly forever, and dammit, one of these days we’ll be right! Now that he’s finished butting heads with Dave Duncan, will the Indians reap the rewards? The potential is certainly there as demonstrated by Reyes’ success in the minors and down the stretch in 2008. In six starts after being acquired by Cleveland, he posted an outstanding 1.83 ERA. If the elbow holds up, 2009 has breakout potential written all over it.

5. Mike Fontenot, Chicago Cubs, 2B: The Cubbies searched high and low this offseason and settled in with the 4.9 million dollar man, Aaron Miles, as the answer to fill the void left by the trade of Mark DeRosa. Why, I ask, did they bother to shell out that kind of coin when they already had a capable replacement in Fontenot? It must have been that power potential that Miles has demonstrated with those 10 homers over the past 1,543 at bats. The 28-year-old Fontenot hit nine homers, drove in 40 runs and managed a very impressive 909 OPS in 243 at bats in 2008. It seems that Fontenot has won the favour of Lou Piniella at this time and is tentatively slotted into the sixth spot in a strong Cub lineup. That translates into solid RBI opportunities for Fontenot, making him a definite asset in the middle infield.

6. Anibal Sanchez, Florida Marlins, SP: This coming season will be the first full year back on the hill for the 25-year-old right hander, after Tommy John surgery cost him the better part of the past two seasons. Sanchez did pitch down the stretch in 2008 and finished off the year on a positive note. With another offseason to rebuild that arm strength, memories of that fine rookie campaign should not be forgotten.

7. David Purcey, Toronto Blue Jays, SP: Toronto’s starting pitching has been decimated by the loss of both Dustin McGowan and Shaun Marcum (not to mention the departure of A.J. Burnett), and is going to be heavily relying on the young left arm of Purcey in 2009. The 26-year-old is certainly worthy of a look-see in both AL-only and deeper mixed formats. His 2.69 ERA and 1.12 WHIP at Triple-A Syracuse didn’t translate well in the majors for the Jays in 2008, but in between several rough patches, Purcey did put together several outstanding efforts. He’s going to get the opportunity to pitch every fifth day for the Jays and any semblance of consistency could mean a great bonus for your fantasy squad’s rotation.

8. Jordan Zimmerman, Washington Nationals, SP: The 22-year-old Zimmerman, a 2007 second-round draft pick, is on the verge of heading into the regular season as a member of Washington’s rotation. In his first full season for the Double-A Harrisburg Senators, he posted a very solid 3.21 ERA and 1.20 WHIP. The top pitching prospect in the National system should be owned in all keeper leagues and on the radar in all formats heading into 2009.

9. Chris Getz, Chicago White Sox, 2B: Okay, he’s won the job, so the playing time (at least early on) should no longer be an issue. What do we now have to look forward to in 2009 from Getz? A quick look at his numbers from the minors indicates a smattering of homers, decent speed, and good strike zone judgement that would suggest potential for a solid batting average. The jury is still out on how this will translate in his first opportunity in The Show, but Getz is certainly worthy of some late-round bets. Hey, that rhymes. How cool are we?

10. Alex Gonzalez, Cincinnati Reds, SS: Don’t forget about A-Gonz when planning to fill a rather short position this coming season. The 32-year-old missed the entire 2008 campaign with a fractured left knee. If Gonzalez can bounce back to his 2007 levels (16 homers and 55 RBI), it would certainly rank the Red middle infielder as one to watch in the early part of 2009. He is undoubtedly available and has proven his ability with the stick. Now, can he stay healthy in 2009?