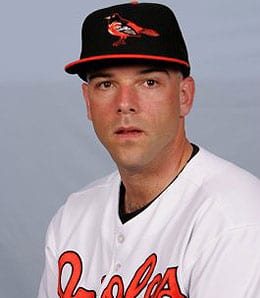 You don’t honestly expect George Sherrill to hold down the Oriole closer job all season, do you?

We’re back with more of the 2009 RotoRob MLB Draft Kit, today shifting gears back to the Top 10 Lists Fantasy Owners Always Wanted But Were Afraid to Ask For.

There’s not a more volatile position in fantasy baseball than closer. Once you get past the Joe Nathans and Mariano Riveras of the world, the turnover rate is extraordinary. Closer is the land where mediocre players can become shutdown closers if even for a short while. Because of the high turnover rate of closers, the position bears extra attention. Here are a few guys that may get a chance to save games if circumstances fall the right way.

1. Chris Ray, Baltimore Orioles: Conventional wisdom says George Sherrill is only keeping the closer spot warm until the O’s think Ray is recovered enough from Tommy John surgery to handle ninth inning work on a regular basis. The O’s have already said that Sherrill won’t get every save opportunity which bodes well for Ray probably hitting double digit saves even if he never fully gets his old job back this year.

2. Dan Wheeler, Tampa Bay Rays: The Ray bullpen is a mess from a fantasy perspective. Troy Percival can’t be counted on to stay healthy, Grant Balfour had great numbers last year, but it’s unclear if he can be counted on to close, and then there is the Jason Isringhausen factor. All of which leads us to Wheeler. He’s been solid for most of his career and will probably get the first shot if (when) Percy goes down. He’s another guy that should luck into double digit saves.

3. Jensen Lewis, Cleveland Indians: Raise your hand if you think Kerry Wood avoids the DL all year. All of you with your hands up please smack yourself really hard upside the head for me. Wood had a fine year in his first season as a closer, but you know he’s going to spend some time on the DL. Enter Lewis, who was 13-for-13 in save opportunities in the second half of 2008. If you’re looking for someone to fill out your RP slot, Lewis is a good bet to get a handful of saves.

4. Fernando Rodney, Detroit Tigers: Rodney is in a fight with Brandon Lyon for the closer job in Detroit. Jim Leyland seems to like mediocre arms as his closer which means Lyon should get the gig. If he does, snatch up Rodney and hold on to him until Lyon implodes. While Rodney will never be a shutdown closer, he can get the job done. I’m betting he ends the year as the Tiger closer.

5. Octavio Dotel, Chicago White Sox: This one is only a hunch, but Bobby Jenks’s declining strikeout rate has me worried. I would not be surprised at all to see the wheels fall off, forcing Ozzie Guillen to resort to plan B, which would be Dotel. Now, Dotel has never been that effective of a closer despite putting up some pretty good save numbers over the years, but he may have the best arm in the Chicago pen. He’s definitely worth a shot in the dark.

6. Jose Arredondo, Los Angeles Angels: I know the Angels went out and spent money on Brian Fuentes after losing K-Rod to the Mets. I actually think the Halos would have been better off letting Arrendondo shoulder the closing load, but Tony Reagins never called to get my opinion (Tony, e-mail me at: Todd@RotoRob.com, I’ve got lots of great ideas; let’s do lunch). Anyway, let’s remember that Fuentes is just a season removed from losing his closer job in Colorado, while Arrendondo was fantastic last year. If Fuentes can’t handle the pressure, the Angels won’t hesitate to go to Arrendondo.

7. Brad Ziegler, Oakland A’s: While the entire western world is ready to anoint Joey Devine as the A’s closer of the present and future, let’s remember that it was Ziegler that ended the year as their closer. In a comparison of arms, Devine is the Dodge Viper to Ziegler’s Ford Pinto. Ziegler gets by with deception while Devine gets by with pure power. Devine has never closed games in the majors while Ziegler has had success in that role.

8. Ryan Franklin, St. Louis Cardinals: In my Top 10 Rookies column, I pretty much said I expect that Chris Perez will take over the closer role and hold on to it for the next decade. Well this here is called covering my ass. Whereas Perez is the hot shot rookie, Franklin is the crafty veteran, and we all know Tony LaRussa loves his vets. If LaRussa does go with a true bullpen by committee, Franklin will get his share of saves.

9. Kevin Gregg, Chicago Cubs: We all know that Lou Pinella is such a patient man so he’ll probably stick with Carlos Marmol through thick and thin even if he struggles. But if Sweet Lou somehow becomes this impatient bastard of a manager and Marmol struggles, why don’t you take a chance on Gregg? He saved 29 games last year and had solid numbers across the board.

10. Jon Rauch, Arizona Diamondbacks: This list was made for Rauch. He’s the guy that seems destined for middle relief, but always seems to sneak in double digit saves due to luck and injury. I know he was absolutely horrible after his trade to Arizona last year, but for God’s sake, Chad Qualls is the closer here. Do you feel good about having Qualls as your closer? I didn’t think so. Go grab Rauch.

By Todd Habiger
Tags: Joe Nathan
This entry was posted on Thursday, March 19th, 2009 at 2:35 am and is filed under 2009 RotoRob MLB Draft Kit, BASEBALL, Todd Habiger, Top 10 lists. You can follow any responses to this entry through the RSS 2.0 feed. Both comments and pings are currently closed.