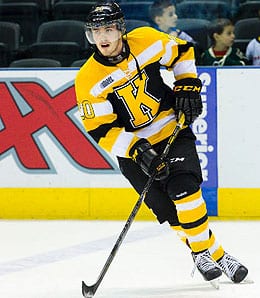 With the NHL draft set for later this week, it’s time to take a look at the mock drafts put together by NHL.com Staff Writers. Adam Kimelman, Mike Morreale and Steven Hoffner each wrote their takes, which were published in early April. We’ve taken the liberty to combine their picks and assemble a mock draft that closely resembles all three. In addition, we’ll discuss which picks make sense for which teams along the way, taking each article five picks at a time.

This is the final article in our six-part series, so, if you haven’t been brought up to speed, be sure to read Part I, Part II, Part III, Part IV and Part V before you go any further. Here we go!

26. Roland McKeown, D, Kingston Frontenacs (OHL) – Montreal Canadiens: The Habs have a great mix of young defenders within the prospect pool, but lack a real nasty presence on the back end. That isn’t likely to change in drafting McKeown, but his skill set as a do-it-all defender is a highly prized asset, particularly in a draft sorely lacking in elite defensive talent. In the video below, you can see some of his highlights from his rookie season (2012-13 season) in the OHL, which — while good — was just a precursor for what lay ahead.

There are a lot of things to like about McKeown. He’s got decent size at 6’1″, 194 pounds, and he could grow more and add 10-to-20 pounds of muscle to his frame by the time he’s ready to make his NHL debut. The Listowel, Ont.-native is also a right-shooting defender, which could raise his draft stock this weekend. However, his most admirable quality from a playing standpoint is how selfless he is with the puck and how well he thinks the game.

In a league in which the elite come at defenders hard and fast, McKeown’s knack for making the smart, simple play to slow down the game will suit him well. However, everyone knows teams are looking for a defender that can contribute offense, and he doesn’t disappoint. In 62 games with Kingston this season, McKeown made his presence known with 11 goals and 32 assists for 43 points and a plus-38 rating before adding an additional goal, four points and a plus-6 rating in seven playoff games.

Montreal would love this kid.

27. David Pastrnak, RW, Sodertalje (SWE-2) – Chicago Blackhawks: The Blackhawks have never been a team for elite offensive talent. After all, it’s not like Jonathan Toews, Patrick Kane, Marian Hossa and Patrick Sharp actually know how to put up the points, right? Sarcasm aside, Pastrnak is the perfect consolation prize at pick No. 27.

Chicago has lacked a legitimate second line centre to play alongside Kane for a long time, but it looks like Tuevo Teravainen is nearly ready to fill it. However, outside of Ryan Hartman and Jeremy Morin, there is a severe lack of depth on the wing in the prospect pool, especially on the right side. If Pastrnak is still on the board by the time Chicago makes a decision, there’s no way he doesn’t fit the bill.

Described as “a flashy, electrifying offensive talent with gifted hands and shiftiness in his feet” by Elite Prospects, it’s hard not to think of a current Chicago right wing that dazzles and confounds NHL goaltenders on a nightly basis. Pastrnak may be an elite playmaker, but he’s got an NHL caliber shot and makes it quickly apparent he knows how to put the biscuit in the basket.

In 36 games with the Swedish Allsvenskan’s Sodertalje, the 6’0″, 168-pound winger scored eight goals and 16 assists for 24 points with a plus-7 rating while playing against men. A few more years of seasoning, and goaltenders league-wide will be waking up in a cold sweat night in and night out.

28. Nick Schmaltz, C, Green Bay Gamblers (USHL) – Tampa Bay Lightning: After projecting to have selected Joshua Ho-Sang earlier in the draft, Tampa Bay will have no issues with drafting another quality young forward prospect in Schmaltz.

The younger brother of St. Louis’ Jordan Schmaltz, Nick displays an ideal skill set as a talented young two-way centre. With excellent vision, quickness and an uncanny ability to read what’s going on in the offensive zone, the future University of North Dakota pivot has the makings of a quality top-nine NHL forward.

A full NCAA career should only serve to further his development after an impressive 18-goal/63-point season in 55 games with the USHL’s Gamblers. He was advertised as a likely 2014 first round pick the past few seasons, and Tampa will make sure that happens with the 28th overall selection.

29. Jakub Vrana, LW/RW, Linkoping (SWE) – Los Angeles Kings: The Stanley Cup champs may have a deep and talented group of young wingers in the prospect pool, but the club has never been known for its elite goal scorers. Vrana could be just the man for the job.

A versatile 6’0″, 176-pound left-shooting winger, there’s no question Vrana is offensive-minded. The talented Czech is a solid, hard-working skater with a whole bag of tricks when it comes to finding a way to put the puck in the net. However, there are some questions regarding how well he can play the defensive side of the game.

In 24 games with the Swedish Elite League’s Linkoping, Vrana scored two goals and an assist for three points with a negative-3 rating while also scoring at over a point-per-game pace with Linkoping’s junior club. With a few more years of seasoning in Sweden, Vrana should be prepared to ply his trade in the North American pro ranks.

30. Nikolay Goldobin, RW, Sarnia Sting (OHL) – New Jersey Devils: Not only do the Devils lack right wing depth, but they also are missing potential star forwards in general. With that in mind, the selection of Goldobin with the final pick of the first round only makes sense.

A native of Moskva, Russia, the 6’0″, 185-pound winger scored at a point-per-game pace his first season with the OHL’s Sting in 2012-13 prior to a monstrous 38-goal/94-point sophomore campaign last season. A dangerous shooter with a wicked wrister, Goldobin can just as easily dance his way through opposing defenses with a quick and artistic mind.

Like Vrana, defense is also a question mark with Goldobin, but his elite offensive upside will be too difficult for New Jersey to overlook in the end.

That wraps up our six-part mock draft series on the 2014 NHL Entry Draft. Thanks for reading, and best of luck to your team as the draft gets underway on Friday.

For a team loaded with talented young play-making centres, the Jackets may get another one. Fortunately, this one can play wing, too.

The Jets’ selection of Morrissey this early surprised many, but the 6’0″, 175-pound blueliner has quietly established himself as a top prospect with his skating skills and superior mobility. He’s got some mad offensive skills from the point (as you can see in the video below), so don’t sleep on this kid.