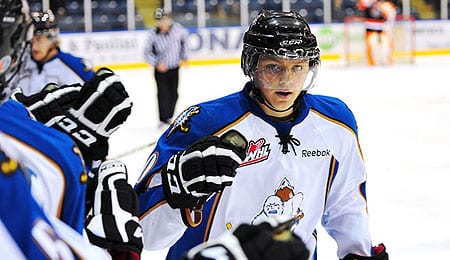 Sam Reinhart could be the best from a family steeped in hockey talent. (Chris Pullen)

With the NHL draft on the horizon, it’s time to take a look at the mock drafts put together by the NHL.com staff writers. Adam Kimelman, Mike Morreale and Steven Hoffner each wrote their takes, which were published in early April. We’ve taken the liberty to combine their picks and assemble a mock draft that closely resembles all three. In addition, we’ll discuss which picks make sense for which teams along the way, taking each article five picks at a time. Let’s begin, shall we?

1. Sam Reinhart, C, Kootenay (WHL) – Florida Panthers: Sam is the latest member of the Reinhart clan set to make his mark in the National Hockey League. At 6’1” and 183 pounds, he’s not big and maybe even a bit undersized, but it’s his poise, maturity and high hockey IQ that has the hockey world abuzz. (Let’s hope it’s not his personality he’s leaning on — see video below.)

In 60 games with Kootenay this season, Reinhart was downright dominant, scoring 36 goals and 69 assists for 105 points with a plus-24 rating. He added an additional six goals and 23 points in 13 playoff games, cementing himself as a top three selection if not first overall. Reinhart is no Nathan MacKinnon, but he’s a future captain in waiting and is known to be an elite battler.

The only thing that may get in the way of him being tabbed first overall is whether or not Florida is interested in his services. After drafting a number of large, elite, high impact forwards, the Panthers are in need of a future franchise No. 1 defenseman. They had the chance to acquire one last year when the Colorado Avalanche drafted MacKinnon over hulking 6’4” right-shot blueliner Seth Jones, but also passed him up in favour of Aleksander Barkov.

With Aaron Ekblad on the board, Reinhart is in very real danger of being passed over when the first selection is finally announced. Fortunately, 29 other teams would be more than happy to have Reinhart on their team. He won’t have long to wait.

2. Aaron Ekblad, D, Barrie (OHL) – Buffalo Sabres: If Ekblad falls to the Sabres, the NHL just needs to automatically award Buffalo the 2018 Stanley Cup championship. Buffalo has a plethora of young talent, particularly defensemen. Rasmus Ristolainen, Mark Pysyk, Jake McCabe and Nikita Zadorov are just the cream of a deep crop of blue line talent. Adding Ekblad would eventually give them a defensive corps that could put the current Chicago Blackhawks to shame.

While there certainly are plenty of good forwards available with the second overall pick, Ekblad brings a skill set near impossible to pass up. At 6’4” and 216 pounds, he’s physically ready to handle the stress and rigours of playing a high end brand of hockey as soon as next season. Ekblad is big, strong and confident in all three zones, is a great skater and transitions well. A true puck-moving two-way defenseman, he has a great first pass and uses his size to his advantage against opposing players.

Whoever drafts Ekblad also gets a much desired booming right-handed shot to quarterback the power play. He’s a game changer, pure and simple, and has the potential to singlehandedly take over games, as proven by his 23 goals, 53 points and plus-7 rating in 58 regular season games this past season as captain of the OHL’s Barrie Colts. We’re sure that’s something Buffalo will consider long and carefully before it even think of passing him up.

3. Samuel Bennett, LW, Kingston (OHL) – Edmonton Oilers: Following years of high picks, the Edmonton Oilers now find themselves with… another high pick. Does anything change in Oiler country? According to Hockey’s Future, the Oilers finally have some defensive depth, which was certainly helped by the selection of punishing blueliner Darnell Nurse with the seventh overall selection last June.

The team does, however, lack size down the middle, a true power play quarterback and an elite goaltending prospect. So, unless Ekblad falls to them, or they reach for a guy like goaltender Thatcher Demko, Bennett—a centre/left winger—is probably the best option. Though a slightly smaller skater at 6’0 and 181 pounds, he’s energetic, highly skilled and fast. Using his speed, Bennett creates scoring opportunities with intelligence, constant awareness, a hard work ethic and a quick release.

He may not be able to do a single pull-up, but 36 goals, 91 points and a plus-34 rating in 57 regular season games with the OHL’s Kingston Frontenacs have to count for something, right?

In his draft year, Draisaitl would score 38 goals and 67 assists for 105 points and a plus-7 rating in 64 games before scoring at a point-per-game pace in a short-lived five-game playoff run with the WHL’s Prince Albert Raiders. The combination of size, skill, skating ability and smarts makes him almost a surefire franchise top-six forward for a long time to come. There’s a lot to love about this kid.

5. Michael Dal Colle, LW, Oshawa (OHL) – New York Islanders: At 6’2″ and 172 pounds, Dal Colle brings much needed size and talent lost in the Nino Niederreiter trade. Also, aside from franchise All-Star stud John Tavares, there isn’t much depth at centre after Ryan Strome and Anders Lee. Dal Colle’s exceptional two-way play gives him an excellent shot at cracking the Isles’ top-nine forward group as a key shutdown winger, though his offensive upside could have him skating alongside Tavares and Kyle Okposo on the top line in the not too distant future.

In 67 regular season games this season with the OHL’s Oshawa Generals, Dal Colle scored 39 goals and 56 assists for 95 points and a plus-8 rating, adding eight goals and 12 assists for 20 points in 12 postseason games. Yeah, we’d say there’s upside.

Stay tuned, picks six through 10 are next.

Now it’s your turn. Let us know in the comments below how you see the top of the first round shaking out.

By Dakota Case
Tags: 2014 NHL Mock Draft
This entry was posted on Friday, June 6th, 2014 at 9:54 pm and is filed under Dakota Case, HOCKEY, Mock drafts. You can follow any responses to this entry through the RSS 2.0 feed. Both comments and pings are currently closed.