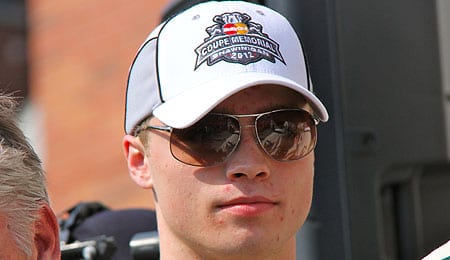 And we’re back with another batch of our NHL Draft Recap, assessing the first round of the 2013 draft. Part I is here.

11. Philadelphia Flyers — Samuel Morin, D, Rimouski (QMJHL): We all know the Flyers needed blueliners something fierce, so it was no surprise that they grabbed the behemoth (6’6″, 203) that is Morin with their first pick and wound up taking four d-men all told (see here for a complete rundown of the Flyers’ draft choices). It’s hard to believe they passed on Nikita Zadorov, but the Flyers love Morin’s 79-inch wingspan and his rapidly improving skill set. It might take a few years, but Morin could be the answer to the Flyers’ prayers of a big, mobile and mean defender.

12. Phoenix Coyotes – Max Domi, C/LW, London (OHL): The Coyotes’ top draft pick will likely get to actually start his career in Phoenix now that the team ownership situation is somewhat resolved. The son of former NHL fighter Tie Domi, he isn’t anything like his dad – he’s actually a skilled player.

13. Winnipeg Jets – Joshua Morrissey, D, Prince Albert (WHL): The Jets’ selection of Morrissey this early surprised many, but the 6’0″, 175-pound blueliner has quietly established himself as a top prospect with his skating skills and superior mobility. He’s got some mad offensive skills from the point (as you can see in the video below), so don’t sleep on this kid.

14. Columbus Blue Jackets – Alexander Wennberg, C, Djurgarden (Sweden): Columbus was hoping to add offense through some draft-day deals, but instead settled on an offensive prospect in Wennberg, the first of its three first-round picks. His draft stock rose significantly over the past year because he proved he can handle PT in the Swedish SEL-2 pro league at the tender age of 18.

15. New York Islanders – Ryan Pulock, D, Brandon (WHL): Pulock owns the hardest shot in the 2013 draft class, and while some believe the Isles would have been better off grabbing a forward, the fact that he slipped to them at 15 makes this a very nice value pick.

16. Buffalo Sabres – Nikita Zadorov, D, London (OHL): The Knights traded up last year to get Zadorov in the CHL import draft, but he surprisingly slipped in the NHL draft despite many believing he was the best blueliner available. He’s a dominant physical specimen (6’5″, 220) and has the tools to be a very fine NHL defenseman.

17. Ottawa Senators – Curtis Lazar, C/RW, Edmonton (WHL): Lazar, 18, is known for his sunny disposition, and now he’ll be taking that vibe to the nation’s capital. He’s got a well rounded game and is considered one of the safest picks of the draft, which doesn’t exactly say much for his upside, we’re afraid. How much his offensive game develops, however, is another story.

18. San Jose Sharks – Mirco Mueller, D, Everett (WHL): The Sharks really wanted Mueller, trading up a couple of spots to scoop the Jackets, who reportedly were also eyeing the steady blueliner. The Swiss born Mueller is known as a strong skating, two-way defenseman.

19. Columbus Blue Jackets – Kerby Rychel, LW, Windsor (OHL): The second of three Columbus first round picks, Rychel was a 40-goal man for the Spitfires last season, but even so, this pick feels like a small reach. The son of former NHL Warren Rychel is a serious power forward.

20. Detroit Red Wings – Anthony Mantha, RW, Val-D’or (QMJHL): After dealing away the 18th pick for No. 20 and No. 58, Detroit grabbed Mantha, a high-scoring winger. In fact, scoring is in his bloodlines – Mantha’s grandfather is former Hab winger Andre Pronovost, who scored 94 goals in his NHL career.

By RotoRob
Tags: NHL Draft
This entry was posted on Thursday, July 11th, 2013 at 9:19 am and is filed under Draft report, HOCKEY, Prospects, RotoRob. You can follow any responses to this entry through the RSS 2.0 feed. Both comments and pings are currently closed.