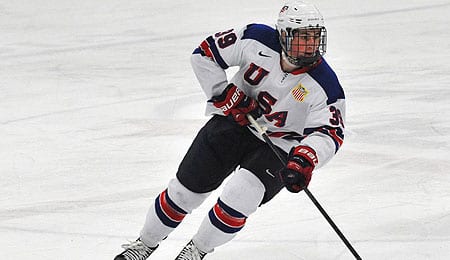 To get caught up, be sure to check out Part I, Part II and Part III before we go any further. Here we go!

16. Dylan Larkin, C, USA U-18 (USHL) – Columbus Blue Jackets: For a team loaded with talented young play-making centres, the Jackets may get another one. Fortunately, this one can play wing, too.

Larkin doesn’t have the build of a two-way power forward at just 6’0″ and 192 pounds, but he plays a big game with an even better offensive ability. He was a point-per-game player in the USHL last season, scoring 17 goals and 26 points, with a total of 31 goals and 56 points in 60 games with the U.S. Development Program as a whole on the season.

The great thing about Larkin’s game is how willing he is to drive to the net with the puck (see video below), which enables himself or his teammates to convert on chances that otherwise might not present themselves. This would represent a very solid pick for Columbus, which will be excited to get him full time action after a few years of college puck with the University of Michigan.

17. Sonny Milano, LW, USA U-18 (USHL) – Philadelphia Flyers: Philly lacks a legitimate NHL top-six scoring winger in the prospect pipeline, and that’s exactly why Milano may go off the board at 17.

The slippery winger has many around the league drooling about his speed, puck handling skills and overall hockey intelligence. Milano dominated the USHL, scoring 14 goals and 25 assists for 39 points and a plus-21 rating in 25 games. This is a finesse player that Philly fans will be pumped to see in action after a few years of seasoning with Boston College.

Yeah, it’s probably safe to say he knows how to handle a puck.

18. Thatcher Demko, G, Boston College Eagles (H-East) – Minnesota Wild: Speaking of Boston College, Demko could be the first goaltender the Wild has ever selected in the first round.

In any other year, we’d laugh at the thought of Chuck Fletcher drafting a netminder with his top selection. However, Ilya Bryzgalov is gone, Niklas Backstrom is aging, regressing and injury-prone and Josh Harding’s battle with Multiple Sclerosis makes him the biggest question mark of all. Youngster Darcy Kuemper stepped in beautifully last season, but he can’t be expected to do it all by himself, and he’s a long way from being an indisputable NHL No. 1 goaltender.

After Kuemper and Johan Gustafsson, the pool in net is quite shallow, which means there is a need for a guy like Demko to shore up the franchise’s future at the position. After two seasons of play in the USHL, Demko emerged as one of the NCAA’s brightest stars, notching a 16-5-3 record with a 2.24 goals against average, a .919 save percentage and two shutouts in 24 games with BC. He’s ideally sized to be an NHL goalie at 6’3″, 192 pounds.

There’s a lot to like about this kid, and whoever snags him will be a happy camper. Still, look to see the Wild go after one of the many young forwards available at this point in the draft.

19. Joshua Ho-Sang, C/RW, Windsor Spitfires (OHL) – Tampa Bay Lightning: A versatile player, Ho-Sang is a small, yet highly skilled forward with slick mitts, great speed and excellent offensive instincts. Unfortunately, he often tries to do too much and has proven to be a selfish player with the puck and undisciplined without it. Those aren’t good traits for a player who has an excellent chance to play alongside offensive dynamos like Steven Stamkos and Jonathan Drouin.

In 67 games with Windsor this season, the 5’11” 165-pound forward scored 32 goals and 53 points for 85 points with a plus-26 rating. Ho-Sang capped off an impressive draft season with a goal, three points and a negative-10 rating in four games before seeing his season come to an end because he was suspended for an undisciplined, illegal hit.

Whoever drafts this kid is getting a stud, but he’s got some maturing to do, too.

20. Ivan Barbashev, LW, Moncton Wildcats (QMJHL) – San Jose Sharks: After giving up Devin Setoguchi, top prospect Charlie Coyle and a first round pick (Zack Phillips) at the 2011 NHL Entry Draft in the Brent Burns trade, the Sharks are finally seeing some rejuvenating youth crack the lineup. That, of course, became painfully apparent to the New York Rangers when rookie Tomas Hertl dumped a four-goal load in a thorough dressing-down at the Shark Tank last season.

Hertl could have the perfect wing-man in Barbashev, a very talented play-making winger with great vision, precision passing and an NHL-caliber shot. In 48 games as an assistant captain with the Wildcats, the skilled Russian scored 25 goals and 43 assists for 68 points with a negative-11 rating. Barbashev proved even better in a short-lived postseason run with four goals, 10 points and a plus-2 rating in six games.

We’re two-thirds of the way done, Parts V and VI will be up shortly.

Now it’s your turn. Let us know in the comments below which NHL prospects you’re tracking.

By Dakota Case
Tags: NHL Draft
This entry was posted on Saturday, June 21st, 2014 at 3:51 pm and is filed under Dakota Case, HOCKEY, Mock drafts, Prospects. You can follow any responses to this entry through the RSS 2.0 feed. Both comments and pings are currently closed.