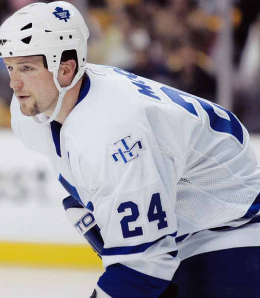 The Leafs believe that the best offense is a good defense — or at least, an overpaid defense. Toronto has sunk an unthinkable amount of money into a guy with a great shot and poor defensive skills (Bryan McCabe), a guy with a great shot who never shoots (Tomas Kaberle), an above-average two-way defenseman (Pavel Kubina), and a cement-footed guy who was laughed out of Boston — Boston! — in Hal Gill. Yes Virginia, there certainly is a Santa Clause in the Kubina household — Santa, in the form of John Ferguson, Jr., paying $5 million to a guy who’s worth $3.5M tops. Don’t expect Kubina to get the same amount of points he was putting up in Tampa Bay, though; having Vincent Lecavalier, Martin St. Louis and Brad Richards is a bit different from having Mats Sundin and… no one.

Staying in Toronto, the Leafs have bypassed acquiring a more proven goalie by going with a salvage project in Andrew Raycroft. Still, he has to have some talent, right? We mean, Raycroft’s stats were pretty darn good when he won the Calder. The problem is that he won’t have that great of a team in front of him. If you need a starting goalie on your roster, Raycroft wouldn’t be that bad of a late round pick, but don’t expect Vezina numbers out of the guy.

And going along the goalie theme, the Lightning has given up on The John Grahame Experience (somewhere, there’s gotta be a band named that) and is going with Marc Denis, who was an underexposed number one over in Columbus. By adding Filip Kuba and allowing Paul Ranger to grow, the Tampa defense should actually be a little better than it was last season, and the Lightning forwards should generate considerable offense. Denis might not be a show-stealer, but he’ll be consistent, and maybe even great. And the good thing is that a lot of people forget about him, so you can use a later pick on him in your Fantasy draft.

Moving across the state of Florida, we have the Todd Bertuzzi experiment going down in Sunrise. Mike Keenan is a taskmaster who usually manages to get the best out of star players before driving them ape-crap. Bertuzzi should return to form with minimum distraction — we’re sure Panther season ticket holders are passionate, but there just aren’t too many of them — and pop in 35-to-40 goals. Look for Olli Jokinen‘s numbers to go up now that he has some help, as well as some young players such as Nathan Horton, who will only get better.

Up in Broadway, the Rangers got a little more depth by adding Matt Cullen as a second-line centre. He’s a steady player, and based on the Rangers attack system, he should be able to record 60-to-70 points playing behind Jaromir Jagr‘s Czech-mates. Of course, who knows if the language barrier will drive Cullen nuts.

Tom Preissing led the San Jose Sharks in blueline scoring last season. We know, you’re saying, “Tom Who?” Well, he ain’t going to do that in Ottawa. Preissing gets shoved down the depth chart behind Wade Redden, newly acquired Joe Corvo and other key Sens defenders. Expect Preissing’s numbers to drop from his career season.

Can Marc Savard put up numbers without Ilya Kovalchuk? That’s what we’ll find out in Boston. Savard will probably play with Glen Murray. Murray’s a shooter (though not nearly as good as Kovalchuk) and Savard’s a passer, so you’d think that there will be some measure of success. However, it’ll be hard to match the pure scoring talent that Savard was surrounded with in Atlanta. We’re guessing that Savard’s last season was the peak of his career.

That sound you hear is Sidney Crosby crying over the fact that Evgeni Malkin has to stay in Russia for one more season. Mr. Crosby will only get better, but his help is limited. Still, he had good chemistry with Colby Armstrong during the second half of the season. Armstrong’s a great sleeper pick in the late rounds — hell, you might even be able to get him in the last round and people would still be confused.