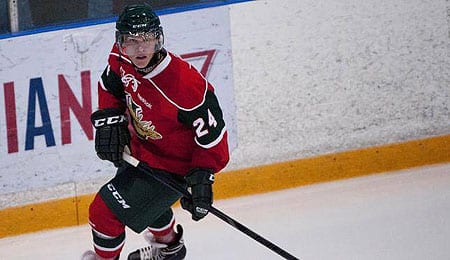 If you need to catch up, we highly suggest you read Part I and Part II first. Here we go.

11. Nikolaj Ehlers, LW, Halifax Mooseheads (QMJHL) – Nashville Predators: After years of watching their team take a defense-first mentality, fans in Smashville couldn’t be more excited to snatch up an offensive dynamo like Ehlers. According to Hockey’s Future, the Preds are strong in goaltending, defense and rugged two-way forwards. However, the team’s prospect pool sorely lacks elite offensive talent. Ehlers instantly addresses that weakness, as made evident by his 49 goals, 104 points and a plus-65 rating in 63 games last season as a rookie with the Mooseheads.

The Dane continued to roll in the playoffs, scoring 11 goals and 28 points in 16 games (see video below). Ehlers finished the regular season in fourth place in scoring in the QMJHL, just four points shy of third and teammate Jonathan Drouin — the third overall pick in the 2013 NHL Entry Draft.

Nashville is in the middle of a culture change. With Barry Trotz now serving as the newest bench boss for the Washington Capitals, former Flyers head coach Peter Laviolette is the man fans and players are going to look to for a change. Don’t get us wrong, defense is still and always will be a staple in Nashville, but it’s time for a scorer or two to arrive and take this team to the next level. Ehlers could be just the ticket.

At 6’0″, 163 pounds, Ehlers definitely isn’t a big forward, but he’s an explosive speedster with puck skills to match. This kid is a gamer that is just as likely to shoot the puck with a wicked wrister as he is to opt to pass to set up someone in better scoring position. If Ehlers falls to Nashville at 11 (he could easily go much earlier), there’s no question he’ll be taken off the board here.

A three-year WHL veteran, Virtanen racked up 45 goals, 71 points, a plus-23 rating and 100 penalty minutes in 71 games with the Hitmen last season. He added an additional four points in six postseason games. Virtanen is a solid two-way player with a smart head on his shoulders and isn’t afraid to get his mitts dirty with physical, grinding play.

Of Finnish descent but born in Canada, the sturdy forward does have good hands, an NHL-caliber shot and a strong, steady stride. Virtanen has the rare combination of size, skill and speed that will make him highly desirable come draft day. The Coyotes will love this kid if they land him.

13. Jared McCann, C, Sault Ste. Marie Greyhounds (OHL) – Washington Capitals: The Washington Capitals find themselves in an interesting position in which they’re still technically playoff contenders, but are having to undergo a sort of rebuild at the same time. With a new GM and head coach, the Caps are hoping a change in style will help get the team right back on track. However, Ovi and Co. aren’t getting any younger, and years of drafting late in the first round have left them with just a handful of top-end prospects. McCann would go a long way towards shoring up a questionable group of prospects at centre.

Having just finished his second season with the OHL’s Greyhounds, the 6’1″, 176-pound McCann is a few years away from NHL action, which is good because he could use some more time playing against his own age group. In 64 games this season, he notched 27 goals and 35 assists for 62 points with a plus-9 rating. McCann is a hard worker on either side of the puck — a true two-way forward with offensive upside thanks to good hands, a solid shot and hockey smarts.

McCann will never be a No. 1 NHL pivot, but he’s a good second or third line option as a shutdown forward that can also put the biscuit in the basket.

14. Julius Honka, D, Swift Current Broncos (WHL) – Dallas Stars: When you take a look at the defensemen already in Dallas’ system, the thought of the Stars drafting another is quite laughable. Honestly, in a draft severely lacking in potential high-end blueliners, it’s highly unlikely Dallas goes this route. However, we’ll take a look anyway.

At 5’11”, 175 pounds, he’s certainly not the biggest defenseman, but Honka’s offensive upside is indeed intriguing. For a Canadian to be listed as the third-best defenseman eligible for the draft is quite impressive given that his country is known more for its stalwart goaltenders and slick forwards. As a rookie with the WHL’s Broncos, Honka led all Swift Current defenders in scoring with 16 goals and 40 assists for 56 points and a plus-10 rating in 62 games.

His size isn’t imposing, but Honka makes up for it with excellent vision and overall awareness that could help him become a potential NHL power play staple for a long time to come. It’s just highly unlikely that happens with Dallas. Still, this kid could be one to watch closely.

15. Alex Tuch, C/RW, USA U-18 (USHL) – Detroit Red Wings: Oh, there’s no question the Red Wings are going to have fun with this kid. Though they have plenty of versatile young forwards in the pipeline, size — more, specifically, the lack of it — has been a real issue. Cue Alex Tuch.

At 6’4″, 213 pounds, Tuch is even making us drool. In 26 games playing with the USHL’s USA National Under-18 Team, Tuch scored 13 goals and 19 assists for 32 points with a plus-18 rating. For such a big player, he has good hands, excellent vision and a high hockey IQ.

A prototypical power forward, Tuch is bound for Boston College, where he’ll be able to continue his development against the best the collegiate ranks have to offer. A few seasons of college puck, and a season or two in the minors, and Red Wings fans are going to be singing his praises for many, many years to come.

The floodgates are about to open as picks 16-to-20 will be revealed shortly.

Now it’s your turn. Let us know in the comments below which NHL prospects you’re tracking.

By Dakota Case
This entry was posted on Thursday, June 19th, 2014 at 11:08 pm and is filed under Dakota Case, HOCKEY, Mock drafts, Prospects. You can follow any responses to this entry through the RSS 2.0 feed. You can skip to the end and leave a response. Pinging is currently not allowed.