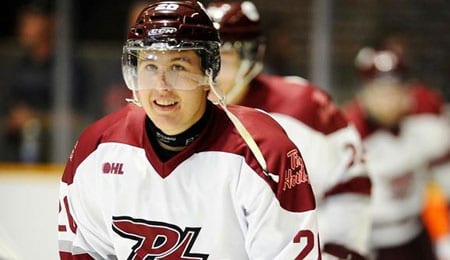 With the NHL draft on the horizon, it’s time to take a look at the mock drafts put together by NHL.com staff writers. Adam Kimelman, Mike Morreale and Steven Hoffner each wrote their takes, which were published in early April. We’ve taken the liberty to combine their picks and assemble a mock draft that closely resembles all three. In addition, we’ll discuss which picks make sense for which teams along the way, taking each article five picks at a time.

Last week, we started with picks one through five. Today, we take a look at picks six through 10. Let’s begin, shall we?

6. Nick Ritchie, LW, Peterborough Petes (OHL) – Vancouver Canucks: The Canucks are aging fast and find their window of Cup contention swiftly coming to a close. Selecting a power forward like Ritchie could go a long way in extending that window.

At 6’3”, 236 pounds, the winger is arguably the most NHL-ready prospect in the draft. He’s big, agile, manhandles his way around the ice (and is not afraid to finish what he started — see video below) and has an impressive, though inconsistent shot. In 61 games this season as an assistant captain for the Petes, Ritchie scored 39 goals and 35 assists for 74 points, racked up 136 penalty minutes and had a plus-4 rating before scoring at nearly a point-per-game pace with five goals and 10 points in 11 postseason games.

Basically, Vancouver gets a Milan Lucic-type player, and you just can’t go wrong there.

7. Brendan Perlini, LW, Niagara IceDogs (OHL) – Carolina Hurricanes: The Hurricanes prospect pool doesn’t quite live up to its name—it’s more of a tropical storm. By selecting Perlini, there’s enough there to keep the Weather Channel busy.

Okay, enough with the weather humour. In all seriousness, Perlini has all the tools to be a successful scoring winger in the NHL. He’s big (6’2”, 205 pounds) and has a tantalizing package of speed, puck handling ability and hockey sense that makes him a threat in all three zones. Perlini is a puck hog, but in a good way, and thrives offensively as evidenced by his 34 goals and 71 points in 58 games this season with the IceDogs.

Think of Columbus’ Ryan Johansen and you’ll understand why Carolina will be so excited to snatch this kid up.

8. Haydn Fleury, D, Red Deer Rebels (WHL) – Toronto Maple Leafs: In a draft not known for its defensemen, the big left-shot Rebel projects to be the best option after surefire top-three pick Aaron Ekblad. As an assistant captain with Red Deer, Fleury racked up eight goals and 38 assists for 46 points and a plus-15 rating in 70 games. He’s big (6’3″, 201), physical and uses his frame to his advantage to shut down opposing forwards.

At age 17, Fleury is likely a few years away from receiving quality NHL playing time, and it probably won’t even be with Toronto. After all, this is a rough mock draft and the Leafs need an elite forward prospect. Unfortunately for them, 2014 isn’t a good year on that front. Still, Fleury is an intriguing youngster for sure.

9. Kasperi Kapanen, RW, KalPa (FIN) – Winnipeg Jets: It has been three years since the NHL returned to Winnipeg, and fans are no longer content with simply having a team. Jets fans want results, and they deserve results.
Winnipeg’s youth movement is led by three fairly recent draft picks in Evander Kane, Mark Scheifele and Jacob Trouba — a promising trio that will prove downright deadly with continued growth and development. However, there is a pressing need for elite-caliber wingers within the prospect pool that drafting a slippery Finn like Kapanen would certainly address.

Kapanen is small (5’10”, 174) and a bit of a long-term project, but he has experience playing against men and the North American style of game with stints in the Finnish SM-Liiga and with Team Finland on the international stage. In 47 games for KalPa this season, Kapanen scored seven goals and seven assists for 14 points and a minus-8 rating. He’s done well on the international stage, scoring eight goals and 17 points in 15 games playing against his own age group while representing his country.

Kapanen is small, slippery and quick with slick mitts and a good release, but he’s no Mikael Granlund. However, that doesn’t mean he can’t develop into a solid top-nine NHL forward. If nothing else, he’s got good bloodlines as his father Sami was a longtime NHLer.

10. William Nylander, C/RW, Sodertalje (SWE-2) – Anaheim Ducks: Drafting a player compared by many to Chicago’s Patrick Kane is always a plus, right? Well, we’re sure not going to disagree. After the Ducks took a flier on defenseman Hampus Lindholm with the sixth overall pick in 2012, another very talented Swede could potentially fall right into Anaheim’s lap in Nylander.

Originally from Calgary, Alberta, the younger Nylander was born while his father, Michael, starred as an offensive forward for the Flames. Though he has dual citizenship, William represents Sweden internationally, but has also played a good deal of the North American game in juniors prior to making the jump to the SuperElit, Allsvenskan and SHL. This past season, Nylander spent a lot of time between Rogle and Sodertalje of the Allsvenskan and Modo of the SHL, scoring a goal and seven points in 22 games with Modo, and 15 goals and 27 points in 35 combined games between Rogle and Sodertalje.

Nylander is such an intriguing prospect for a number of reasons. He’s quick, extremely skilled and one of the most dynamic young players in his draft class. He’s got quick hands and is an active shooter, but can distribute the puck at a high level just as frequently. Nylander is an incredible young puck handler, particularly at high speed, and has a hockey I.Q. that’s off the charts. He has all the tools needed to develop into an elite NHLer, which is why the Ducks won’t think twice about snatching him up to round out the top 10.

Now it’s your turn. Let us know in the comments below which NHL draft prospects are exciting you.

By Dakota Case
This entry was posted on Friday, June 13th, 2014 at 7:47 pm and is filed under Dakota Case, HOCKEY, Mock drafts, Prospects. You can follow any responses to this entry through the RSS 2.0 feed. You can leave a response, or trackback from your own site.