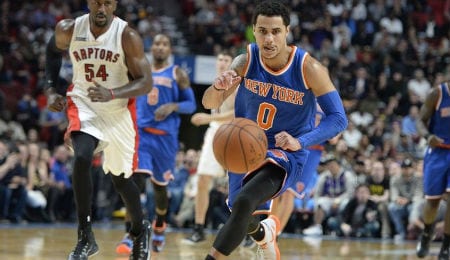 Shane Larkin could soon have a much larger role for the Knicks. (Eric Bolte-USA Today Sports)

The Pistons had a seven-game win streak, the Hawks are on a eight-game win streak, and the 76ers beat both the Timberwolves and the Knicks in the race to six wins. Our preseason deep sleeper and Wire Troll alumni, Rudy Gobert, is turning into one of the best defensive players in the league right before our eyes. Oh and LeBron James and Kobe Bryant are missing games. It has been a weird start to 2015.

Shane Larkin, PG, New York Knicks (ESPN: 2.0 per cent; CBS: 6 per cent): The Knicks are blowing everything up. There are growing rumours going around that Jose Calderon is on the block. If Calderon gets traded, Larkin would likely get the nod at the starting job and provide a big help in steals and an interesting dynasty option moving forward. Larkin has shown an ability to drive to the bucket, take contact and still finish (see video below), so don’t overlook him.

D.J. Augustin, PG, Detroit Pistons (ESPN: 3.9 per cent; CBS: 25 per cent): The Pistons are playing well, and so is Augustin, with a 26-point game, a 19-point game and a double-double all within his last six games. It’s looking like he could start to be a plug and play matchup option.

Cleanthony Early, SF, New York Knicks (ESPN: 0.6 per cent; CBS: 7 per cent): Early is a very interesting player for deep league owners. He is just starting to get minutes and could have some value moving forward as he is improving in every game.

Marvin Williams, SF/PF, Charlotte Hornets (ESPN: 2.8 per cent; CBS: 15 per cent): Williams is an inconsistent player but the former No. 2 overall pick from North Carolina is starting to get on a roll with at least eight rebounds in five of his last eight games. His scoring is also up. Williams makes for an interesting play if you need a little help in rebounding, scoring and three-pointers. He is also a double-double threat.

Trevor Booker, PF, Utah Jazz (ESPN: 1.3 per cent; CBS: 7 per cent): This is not good news for Enes Kanter or his owners, because not only has he been sidelined with an ankle injury, but Gobert has gone off. Meanwhile, Derrick Favors has looked like an all star and now Booker has turned into a good sixth man. With a lot of people calling for a Kanter trade (he’ll be a restricted free agent after the season), Booker could keep up his stats from his past five games (11 points and nine rebounds a game). Bookier is also is starting to take some threes, and has hit four of them over this stretch.

Chris Andersen, C/PF, Miami Heat (ESPN: 1.3 per cent; CBS: 3 per cent): You know what you’re going to get with old school veteran Andersen. If you need help in blocks, he’s a decent pick up and the Birdman is also a fairly good rebounder.

Hassan Whiteside, Miami Heat (ESPN: 8 per cent; CBS: 27 per cent): Back in his draft year, we thought Whiteside would be a first round pick, but he didn’t wind up going until early in the second round and since then, he’s failed to gain any Fantasy traction. Until now, that is. Suddenly Whiteside is regularly seeing 20 minutes or more per game and his production is commanding more PT as he’s been flirting with double-doubles (hitting the mark last Sunday) while throwing a block party in South Beach, with 14 swats in the last four games. Toss in a high field goal percentage and you’ve got a player worth considering for Fantasy purposes. It’s hard to believe the Heat grabbed Whiteside from the Grizzlies’ D-League team given how well he’s protecting the bucket.

By McCade Pearson
Tags: Atlanta Hawks, Detroit Pistons, Minnesota Timberwolves, Philadelphia 76ers
This entry was posted on Sunday, January 11th, 2015 at 4:22 pm and is filed under BASKETBALL, McCade Pearson, The Wire Troll. You can follow any responses to this entry through the RSS 2.0 feed. Both comments and pings are currently closed.