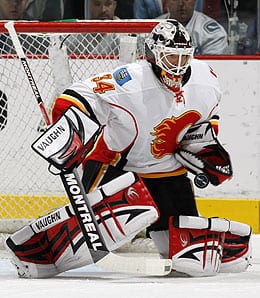 Miikka Kiprusoff can hear Father Time knocking on the door.

There is a strange depth to the goaltending position this season that there generally isn’t in most years, mostly because this season, the top tier of goalies has thinned drastically. Martin Brodeur is not quite the Brodeur of old. Some guys like Cam Ward just cannot get enough wins and Miikka Kiprusoff has seen Father Time catch up with him as well. Most goalies now play 55-to-60 games and that’s it. The days of No. 1 netminders getting 70-to-75 starts are gone for the most part.

The bigger problem with some goalies is injuries. Do we know if Jonas Hiller is completely over his vertigo? Vertigo never fully goes away and can come back anytime. Will Jaroslav Halak have a better second season in St. Louis? There is potential to be had, so if you do not draft one of the first six or seven goalies, you can slide down into the second or third tiers and do just as well. However, goalie runs have been common in drafts so you do want to keep that in mind. Especially because of goaltending, you want to actually show up to your draft.

So while you wonder how Jaromir Jagr’s return to the NHL will go, let’s take a look at the top men to target between the pipes.

1. Tim Thomas, Boston Bruins (NR): Thomas wasn’t even the Bruins’ starter heading into last season, yet he wound up earning his second Vezina Trophy in three years. He truly had an amazing season, winning 35 games for the second time in his career while enjoying a career-best 2.00 GAA. There’s no questioning who the man in net is for the Stanley Cup Champs this season.

2. Pekka Rinne, Nashville Predators (11): Rinne just missed being a top 10 goalie heading into last season, but after putting up a career-best .930 save percentage, he’s soared near the top of the list and has become pretty much the consensus No. 2 netminder in Fantasy hockey.

3. Carey Price, Montreal Canadiens (17): We pegged Price as a potential bust heading into last season, but he quickly busted that notion and wound up leading the league in wins while recording a career-best 2.35 GAA. Oops. Some experts have him ranked lower than this, but we’re not making that mistake again.

4. Henrik Lundqvist, New York Rangers (2): Lundqvist missed some time in late March with a neck injury, so he didn’t log quite as much action as he usually does. In fact, last season was the first time in five years he didn’t play at least 70 games. We wouldn’t blame you for picking Lundqvist even earlier than this given what he’s capable of. Hell, it’s only training camp and reports suggest he already looks razor sharp.

5. Ilya Bryzgalov, Philadelphia Flyers (5): Phoenix could be in serious trouble this season after dealing away the signing rights to Bryzgalov. And now the Flyers finally have a bona fide star goalie. Playing behind a tighter team, Bryzgalov may have the GAA to match his save percentage this season. The Flyers have a brand new team this season, and the addition of Bryzgalov is at the centre of that remake.

6. Roberto Luongo, Vancouver Canucks (3): Luongo earned a share of the Jennings Trophy last season as he and backup Cory Schneider allowed the fewest goals in the league. Given that, there are many that believe Luongo is the top Fantasy option between the pipes, but we’re not among that group. While we wouldn’t shoot you for picking him before this, we’re not recommending it. The emergence of Schneider allowed the Canucks to rest Luongo more last season, and that’s a trend we expect to continue. It’s a constant battle for Luongo to win the respect of fans and Fantasy owners alike and that’s manifested itself in these rankings.

7. Ryan Miller, Buffalo Sabres (1): We ranked Miller at the top of this list heading into last season, but he’s slipped a fair bit a season after he did not receive as many starts yet surrendered more goals. Miller tied his career high with five shutouts for the third straight season, but – last season, at least – his lofty salary did not match his performance.

8. Marc-Andre Fleury, Pittsburgh Penguins (4): We ranked Fleury as a top five goalie last year, but we’re not quite as bullish on his prospects this season despite a superb effort last season. Fleury has played at least 65 games in back-to-back campaigns, but his numbers are due to slide this season, so don’t reach for him.

9. Tomas Vokoun, Washington Capitals (7): Vokoun is definitely used to playing under fire, regularly leading the league in rubber faced. There are some that think he’s a top five goalie, but we’re not sure about that. However, if nothing else, his numbers have been remarkably consistent over the past few seasons, so it’s somewhat surprising the Caps were able to get him at the bargain price of $1.5 million for one year. Vokoun’s arrival in Washington sinks any hopes that Michal Neuvirth will take the next step forward this season.

10. Martin Brodeur, New Jersey Devils (6): Brodeur has his share of fans, but even they have to admit the end of an incredible era is coming soon. Last season he had his highest GAA since 2005-06, and if he doesn’t bounce back, the Devils may have a decision to make should Marty choose he wants to play another season after this one.

11. Jonathan Quick, Los Angeles Kings (12): As we discussed last year, the Kings have an embarrassment of riches in young goaltending talent. Jonathan Bernier is just getting better and better and owners of Quick need to be aware that his job security isn’t ironclad by any means. Quick was reduced to 60 starts last season, and that number could drop lower as the two move closer to a timeshare. Still, Quick has won at least 35 games two seasons running and he’s quite level headed for a young goalie, so he remains a solid bet to be a decent low end No. 1 Fantasy option.

12. Corey Crawford, Chicago Blackhawks (NR): We hate to say we told you so, but we did, identifying Crawford as a goalie to target back in mid-December before he finally took over from Marty Turco as the Hawks’ top man between the pipes. He wound up making 55 starts and putting up a solid 2.30 GAA, thereby entering this season as the clear No. 1 in Chicago. Just 26, Crawford can definitely get much better, so don’t sleep on him.

13. Cam Ward, Carolina Hurricanes (8): Ward had a tough start to the season, and was simply peppered early on. It sure seems like a long time ago that, as a rookie, Ward backstopped the Canes to the Stanley Cup. Still, he wound up with a career best in save percentage last season and faced a ridiculous 2,375 shots. Ward is dealing with some minor health woes early in training camp, but it’s nothing to worry about.

14. Craig Anderson, Ottawa Senators (14): Anderson is a goalie we recommended as a decent option in late-February after he landed on the Sens. We were bang on there, as he completely turned his season around once he arrived in Ottawa. Looking for a potential gem in net at a low cost? Look no further than Anderson. The dude had a 2.05 GAA after the deal, and those that think he is no longer a top 15 goalie could be missing out on a nice sleeper here.

15. Dwayne Roloson, Tampa Bay Lighting (NR): Some may have Roloson ranked slightly higher, but despite his solid season split between the Isles and the Bolts, we aren’t quite ready to put him any higher than No. 15. Still, the soon-to-be 42-year-old had a hell of a comeback effort last season, and early reports from training camp suggest he’s out to prove that it was no fluke.

16. Jimmy Howard, Detroit Red Wings (10): We had Howard as a top 10 goalie a year ago, but after he stumbled in his second season as the starter, he’s slipped a bit in the rankings. He faced 19 less shots last season, yet surrendered 27 more goals. But with the underwhelming Ty Conklin backing him up, Howard should again be in line for plenty of action.

17. Antti Niemi, San Jose Sharks (26): The Sharks have Niemi under contract until 2012-13 after he played a career high 60 games last season, earning 35 wins. He gave up a few more goals than you’d like to see, but there was nothing wrong with that .920 save percentage, another new personal best. He’s missing in action early in training camp after having a cyst removed, but it’s just a minor woe and he’ll be ready to hit the ice any day.

18. Jonas Hiller, Anaheim Ducks (19): As we mentioned up front, the vertigo remains an ongoing concern with Hiller, and because of that black cloud hanging over his head, those who draft him better be prepared to get burned. He racked up a career-best five shutouts last season, but could his 2011-12 campaign again be cut short?

19. Jaroslav Halak, St. Louis Blues (21): We thought Montreal got rid of the wrong goalie when they dealt Halak and opted to go forward with Price. The latter’s performance proved that assumption incorrect, while Halak had his worst save percentage since his rookie season. Still, Halak has big time sleeper potential and could easily wind up playing above this ranking, so don’t overlook him on draft day.

20. Ondrej Pavelec, Winnipeg Jets (28): Last year, Pavelec barely made our list; this season, he’s reached the top 20 after facing plenty of rubber and improving his numbers across the board. Then he went to Slovakia and starred for the Czech Republic in the IIHF World Championship. Not a bad season for a dude that did a scary face plant two minutes into the 2010-11 season opener when he inexplicably fainted and had to be rushed to hospital for tests – which wound up revealing nothing.

By RotoRob
Tags: 2011-12 NHL Draft Kit
This entry was posted on Tuesday, September 20th, 2011 at 9:27 am and is filed under 2011-12 RotoRob NHL Draft Kit, Cheat sheets, Chris Wassel, HOCKEY, RotoRob. You can follow any responses to this entry through the RSS 2.0 feed. Both comments and pings are currently closed.