And it’s on to the ice as the 2010 RotoRob Awards rage on with the release of our hockey awards. 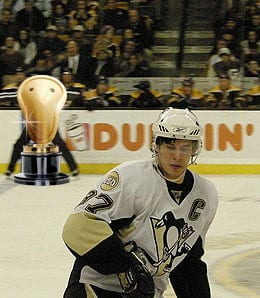 Sidney Crosby has taken over as the man in the NHL.

Sidney Crosby, C, Pittsburgh Penguins: Where to start? Well, there is that point streak this season and there was that 50-goal campaign last season. There is that swagger that he can score from anywhere. Does everyone get the idea that this guy is awfully special? He leads the league in points with 60, which is 12 more than Steven Stamkos who was challenging for 50 in 50 status. As of press time, Sid The Kid has 29 goals, including nine on the power play, putting him well above the pace he set in 2009-10 when he tallied 13 PPG. The 109 points he put up last season was not enough, apparently; he is on pace to shatter that total this season. We could be talking over 140 when all is said and done.

Crosby is the best player in the NHL and, really, Steven Stamkos, Alexander Ovechkin, and all the rest are just mere spectators when it comes to the best Fantasy player, period. There is no one else better.

Alex Ovechkin (who put uo a third straight 50-goal campaign last season, despite missing ten games), Steven Stamkos (who lived up to his No. 1 overall selection last season in a big way, and this season is picking up right where he left off) and Tim Thomas (who struggled last season and lost his job, but has snatched it back with a serious studly showing this season). 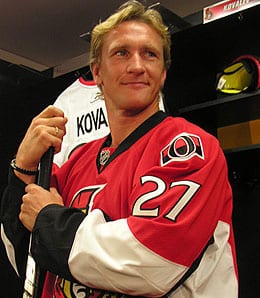 Alexei Kovalev has been rancid for the Sens.

Alexei Kovalev, RW, Ottawa Senators: This is always a tough category with many to choose from. However, no one died harder in the first part of this season and the Fantasy stretch last season than Mister Enigma himself. Kovalev managed just two points from February 14 to the penultimate game of last season, then a brutal nine-game, one-point stretch over last month and this month. Okay, he does not want to be in Ottawa, but at least try, dude. Oh, right…that word only exists in Kovalev’s vocabulary when he feels like it.

Yes, he has turned it around somewhat, but the brutality alone is not enough to save a player that has point a game potential from being on this list. It truly could not be worse for Kovalev owners.

Mike Smith (as much as he struggled last season, he’s been even more rancid this season and now he’s hurt) and Olli Jokinen (who stunk in New York and hasn’t been much better since arriving in Calgary; he’s scoring a bit more often this season, but he’s a -6). 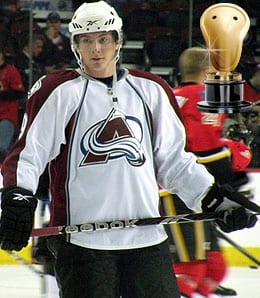 Matt Duchene, C, Colorado Avalanche: This is a very tough award to choose because of the criteria of timing (we base the awards on the calendar year, meaning the second half of last season and the first half of this season are taken into account). Although Duchene did not win the Calder Trophy last season (Tyler Myers of Buffalo did), many felt that good old Engine No. 9 deserved it. While Myers has faded some in his sophomore season, all Duchene has done is average a point a game and has looked improved even on the defensive side, garnering a +8.

Duchene’s shots blocked are up and his hits are too. Some will wonder what could have been on Long Island, but Colorado fans are just thankful that No. 9 will be lighting the lamp with the Avalanche for years to come.

Tyler Myers (who was a huge — in more ways than one — surprise last season), John Tavares (who enjoyed a solid rookie effort, but hasn’t taken the anticipated step forward yet this season) and Logan Couture (who looks like a serious sniper for the Sharks). 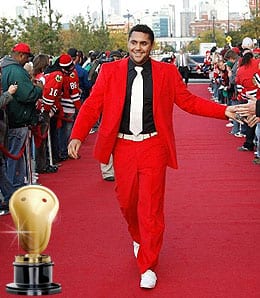 A red suit on a red carpet? Hell, Dustin Byfuglien deserves an award for that.

Dustin Byfuglien, D, Atlanta Thrashers: This was a very tough choice, but remember this is a calendar year award. At the end of 2009, Byfuglien was in an awful way. He had six points and was toiling away in Chicago…and then 2010 hit. Being paired with Jonathan Toews and Patrick Kane did wonders for Byfuglien’s confidence. The rest was history as “Big Buff” erupted in the playoffs for 11 goals in 22 games to nearly win the Conn Smythe, and he lifted the Stanley Cup. The story was only beginning, however.

Byfuglien was then traded to Atlanta in a blockbuster trade. No one knew what to expect when he was once again made a defenseman. However, Byfuglien was paired with Tobias Enstrom, who finished among the top 10 in scoring among blueliners in 2009-10, and that helped. Before our very eyes, Byfuglien struck gold and is averaging right around a point a game for the much-improved Thrashers. No one saw this coming and a big part of it has to be the 6’4″, 260-pound guy on skates who looks like a bowling ball out there, ready to wreak havoc.

Just think Atlanta fans, the best may be yet to come for the big guy. That is a scary thought for the rest of the NHL. Besides being on an 80-point pace, Byfuglien is on pace for 170 hits and 90 blocked shots. That is not too shabby.

And now this gets a little bit fun. You have seen the serious awards and now it is time for the crazy ones. Submitted for your amusement or just that feeling of “yes, he said that,” these are the awards your mom told you did not exist. Now everyone has been warned. If you remembered last year’s awards, then you will understand.

Tomas Vokoun has been under constant fire for the past year.

This award is presented to the goalie that felt like all he was doing all year was saving pucks. We humbly present this honour to Tomas Vokoun, who faced nearly 35 shots a game over the last half of the 2009-10 season. Yes he has faced a bit fewer so far this season, but he still leads the NHL in saves thanks to his own durability and injuries to some of his closer competitors. Hey Tomas, you might want to get your agent to add a danger pay clause to your next contract.

I’ve Fallen and I Can’t Get Up Award 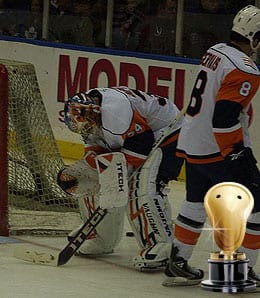 Fragile, thy name is Rick DiPietro.

This award goes to the player that is often broken and seems to never quite get fixed right. The tough part is there are so many players that are always seeming to break down, but Islander goalie Rick DiPietro earns this for his uncanny knack of getting injured at almost any time. On the bright side, Ricky had played more games this season (14) than he did in the last two years combined, but now he is hurt again in a shock of shocks. Who knows what this latest setback will cause in the way of damage? Stay tuned. 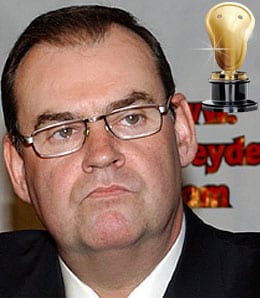 The Devils are bad enough to make Pat Burns roll over in his grave.

This award is given to the team that literally has stunk so badly that it needs help. The key here is, it has to be a team that Burnsie had previously coached. The winner is the New Jersey Devils. Literally, New Jersey has driven many to a padded wall and I am sure Coach would know how to fix this team. Truly, he will so be missed.

The Gods Must Be Crazy Award 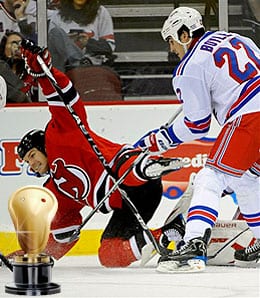 Brian Boyle (right) has shocked us this year.

This award is given to the player you never saw coming. This year, the winner is Brian Boyle of the New York Rangers. Boyle had actually scored eight goals without an assist and for a long while had more points than Ilya Kovalchuk. It was surreal to see a career fourth (and nearly fifth) line player all of a sudden score timely goals. Crazy things like this only happen every so often and who knows what 2011 will bring but for at least a few months, this is a story that has a surprise ending.

By Chris Wassel
Tags: NHL, Pittsburgh Penguins, Sidney Crosby
This entry was posted on Monday, December 27th, 2010 at 7:48 pm and is filed under Chris Wassel, HOCKEY, RotoRob Awards. You can follow any responses to this entry through the RSS 2.0 feed. Both comments and pings are currently closed.