The Wire Troll: Buried in an Avalanche 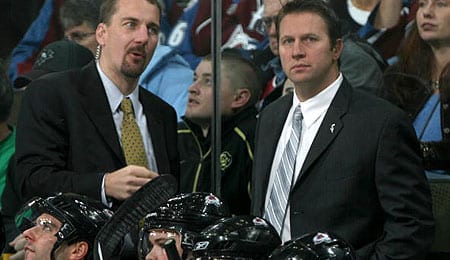 Joe Sacco (right) has reason to look worried behind the Avalanche bench.

There are times within a season when you can take a snapshot of Fantasy team and say, ‘hey, that trade made them or buried them.’ Then there are times when it buries them. These are just one of those times. All you can really do is just hope and pray that it gets better for you, the Fantasy hockey GM.

So what can you do as an owner? Surely you saw the trades that the Colorado Avalanche made and immediately cringed horribly. Now, the Avs will try to tell you that these trades were absolutely necessary and, yes, this team has plunged worse than the New Jersey Devils did in the first few months, but there were a lot of things that went wrong with Colorado.

However, this runs deeper than coach Joe Sacco, and GM Greg Sherman will try to spin this in whatever way humanly possible. In the last few weeks, it became apparent that Colorado’s ticking time bomb has exploded. The season was lost as there were just too many injuries at critical times to save this thing. However, the panic moves made by the “Colorado brain commune” is going to have far reaching effects.

This will be an unconventional Wire Troll as far as format. What Fantasy GMs need to know is Kevin Shattenkirk is the player in the Saturday blockbuster deal that may ultimately pay the most dividends. Somewhere John Davidson is laughing uncontrollably.

Shattenkirk, by the way, is only owned in 15-to-25 per cent of Fantasy hockey leagues depending on type and format (Yahoo!, Fanball, ESPN, etc.). Now, his 26 points as a defenseman is noteworthy because there is potential for him to improve in St. Louis. If Colorado had been a bit more patient, maybe it could have kept him. Most in the Colorado organization think Erik Johnson is the answer. Clearly, at his age, Shattenkirk will only get better and — for this Fantasy expert — is probably the better choice going forward.

Even Brian Elliott may be worth a flier for those that are real desperate. Ottawa quit completely on him as Craig Anderson , in the sense of team play, got a lot more support Saturday than Elliott ever did. By the way, the new Colorado goalie is owned in 36 per cent of Yahoo! leagues and ranges from 30-to-35 per cent everywhere else for the most part. No one is saying that Anderson is likely to put up a 2.75 GAA and .910 save percentage, but he may be capable of a 3.00 GAA and a .900 save percentage with a few wins along the way. In deep leagues where hardly any goalies are out there, it cannot hurt to at least take a look.

These are the two guys that could be out there for your Fantasy hockey waiver wire picks of the week. The question is, who does this trade hurt most? Well that answer is Peter Budaj and Johnson. Simply put, these two players will just be going through the motions for the rest of the season. Clearly, there was an immediate short-term winner Fantasy-wise and even Anderson owners have to rejoice some. However, Chris Stewart on a roster in St. Louis that is improved and healthier on the man advantage, will pay dividends and Fantasy GMs are going to ride the wave.

Next week, we will have more Wire Troll craziness including some faces in new places again I am sure. Until then, aloha for now and good luck in your Fantasy leagues. If you have any questions at all, come and bring them to us, using our handy Fantasy Question? link in the left-hand column of the site.

By Chris Wassel
Tags: Colorado Avalanche, St. Louis Blues
This entry was posted on Sunday, February 20th, 2011 at 3:05 pm and is filed under Chris Wassel, HOCKEY, The Wire Troll. You can follow any responses to this entry through the RSS 2.0 feed. You can leave a response, or trackback from your own site.