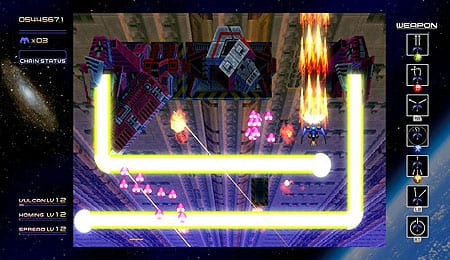 Blow this guy up in seconds or show off by surviving its several minute long attack sequence? Hmm, decisions.

For 18 years, Japanese game developer Treasure has been blowing away fragile gamer minds with its intense action-packed titles. New audiences have been fortunate enough to enjoy favourites such as Gunstar Heroes and Ikaruga through re-releases on current gen consoles, but there are still a few titles yet to find a stateside release. Now, one of Treasure’s most valued and rare gems from the Sega Saturn years has made its way domestically onto Xbox Live Arcade. Being a huge fan of the original, I have to tell you, arcade shooter fans: bow down, shed a tear of joy and thank the deity of your choice: Radiant Silvergun has finally arrived.

In this vertical shoot ’em up, players pilot the spacecraft Silvergun armed with three primary weapons mapped on the face buttons; vulcan, homing and spread shots. Pressing two-button combinations of any of these three creates four unique attack variations, giving immediate control of a total of seven weapons to use on the fly without the need of a weapon select button. Customization of the controller layout gives gamers the ability to map out each weapon on a separate button if they’d like.

One of the more unique weapons of the Silvergun is a sword, which does a 360-degree swipe around the ship before wielding it to dish out serious damage at very close range. This sword can also absorb pink enemy projectiles, which can be used to charge up a hyper-sword attack that clears the screen of enemies, much like the standard smart-bomb in any shooter. During the timeframe of this attack, your ship is invincible, making it an excellent offensive and defensive maneuver.

In most cases, the ship moves at just the right speed to quickly evade enemy attacks with great precision, yet there are a few areas where a little more could’ve come in handy. The multiple weapon system is utterly brilliant, making this title one of most dynamic and strategic shooters around. Managing seven weapons may seem overwhelming for this type of game, however, it’s the mastery and flexibility of the weapons plus knowing when and how to use them that makes Radiant Silvergun so satisfying to play.

Back in 1998, I was amazed at how great this game looked and sounded. It had beautiful scrolling backgrounds with an insane amount of on-screen enemies, elaborate boss designs running at a smooth frame rate and a spectacular soundtrack. How does a 2D scrolling shooter mixed with 3D models from 13 years ago hold up today? When it’s a game of this pedigree with a nice coating of HD up-res, I’d say it holds up just fine.

Using the exact same models as the original release, the graphics are a bit on the blocky side by today’s standards. However, the textures have been cleaned up a great deal with a slew of transparency effects that weren’t possible on the Saturn. Want to see what the original looked like?  All HD effects are optional and adjustable, so you can fine tune them to get the look you want. Also customizable is the 16:9 framing of this 4:3 classic, with multiple wallpaper selections and an adjustable HUD.

The game retains all the same great sound design of the original, including the Japanese voice acting and excellent epic sci-fi musical score. The only drawback are the subtitled gameplay moments in the story mode — trying to read subs while simultaneously playing the game is a bit of a workout on the eyes. It’s not imperative to the gameplay, but there is a sense of missing out on something, and while I’m not the biggest fan of dub work, this is a game that could have benefited from it.

Radiant Silvergun is damn-near shooter perfection in the sense that it hits so many gamer sweet spots at once. The action-fueled adrenaline junkies get their fix from laying each stage to waste and bringing down behemoths many times their size. At the same time, the scoring system delivers added complexity for those looking for a more cerebral challenge. Enemies essentially come in the three primary colours of red, yellow and blue. Destroying three of the same colour in a row will earn a combo score bonus. The scoring system may sound familiar to fans of the spiritual successor, Ikaruga, and as a matter of fact, there’s an option to play with said games’ combo-chain system.

While early enemy patterns are very obvious with waves of same-coloured ships, further stages feature intricate placement of enemies making every encounter a puzzle of sorts in which the gamer not only fights to stay alive, but to also capitalize on high-point potential. Also built with scoring in mind are the giant bosses that can be destroyed piece by piece. Gamers can concentrate fire on the core of each boss to eliminate them quickly, but the ones who take their time finding and obliterating every weak spot available will earn the bigger bonus.

In most shooters, it’s common to collect power-ups from fallen enemies, but here, gamers level up the three primary weapons with their continued usage. The more ships you destroy, the more powerful your weapons become — much like earning experience points in an RPG. The two different modes, Arcade and Story, take different approaches to this leveling up. Playing Story mode pits you against the entire campaign with no continues, but it creates a save file where your weapon levels are retained and built up from each playthrough. Arcade mode starts you from level 1 every time, but you’ll be equipped with multiple lives and continues.

These are necessary advantages, because if Radiant Silvergun has a crux, it would be its difficulty. While I don’t find this title to be as difficult as the brutality that is Ikaruga, it’s still pretty tough. But, as with anything, practice makes perfect, and this game gives all the good means for practice. The ability to play the six massive stages at slower frame rates to analyze attack patterns along with multiple difficulty settings are at your disposal. For those who invest the time into learning, enjoy your future success. Zipping through areas without losing a life will make you feel like a gaming god.

For the few fortunate souls out there that are lucky enough to still have their hands on this import, I assure you that everything is here and more. Everyone else: please, don’t miss out! This is a fully equipped title with smooth local and online multiplayer, competitive score leaderboards, detailed stats, and savable replays as well as bonus gamer pics and avatar awards. The game is as addictive and rewarding as it comes with a rather decent story, hidden goodies and loads of replay value. I don’t mean to sound all grandpa about it, but seriously, they just don’t make them like they used to.

You know a game is a true classic when you can pick it up an entire decade after its release and it’s still as exciting as it was before. That’s what Radiant Silvergun is. Arguably Treasure’s finest shooter is readily available on Xbox Live Arcade for 1200 MS Points and demands your immediate attention. Unless you detest vertical shooters or don’t like games to give you a good whipping, grab this game now!

By Jess Castro
This entry was posted on Monday, September 19th, 2011 at 12:11 pm and is filed under Jess Castro, Video Game Reviews. You can follow any responses to this entry through the RSS 2.0 feed. You can leave a response, or trackback from your own site.