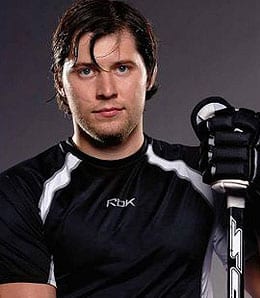 Alexander Frolov will find it hard to meet the lofty Broadway expectations.

The 2010-11 RotoRob NHL Draft Kit is nearly complete now. We’ll soon be releasing our top 10 rookies article — and boy, does this year ever feature a talented freshman class — but for now, here are ten players to avoid this season.

It has been a long journey, but at long last the finish line is near. Now all you have to do is draft your team. No sweat, right? Now we dig deep into the busts.

1. Alexei Kovalev, RW, Ottawa Senators: Kovalev managed just two points after the Olympic Break last season and he has only one uneventful season to go before he can get out of Ottawa unless Bryan Murray and the Senators trade him first. Kovalev has not looked all that great in training camp and honestly has little to play for.

2. Tomas Plekanec, C, Montreal Canadiens: So Plekanec puts up 69 points three seasons ago, then 39, and then 70 last season in a contract year. It is hard to actually gauge what Plekanec will do this season, but the trend seems to indicate a bit of a down season is in store. His linemates may be a notch down as well. Either way, Plekanec just will not be the force many are expecting in Ottawa. Maybe next season?

3. Alexander Frolov, LW, New York Rangers: Some will say that because he’s playing with Marion Gaborik, Frolov will have a breakout season, but I think the expectations have increased so greatly that his production will ultimately be a disappointment. Fair or unfair, but Frolov will end up in the doghouse before the penthouse.

4. Olli Jokinen, C, Calgary Flames: In his second tour of duty in Calgary, Jokinen will be paired with Jarome Iginla. On the surface sounds that great but, the last time these two were put together, after a hot beginning Jokinen went south fast. Expect more of the same again. The Sutter and Sutter experiment is still going haywire.

5. Carey Price, G, Montreal Canadiens: Simply put, the Habs made the wrong choice in the offseason by trading Jaroslav Halak and then signing Price to a two-year extension. Price is giving up goals like a torrential sieve in his first two pre-season starts. Maybe he can tell Hab fans to hush with the wrong finger. At this point, it could be a very ugly season if you have Price on your team.

6. Alex Tanguay, LW, Calgary Flames: Another guy who is not quite half the man he used to be. The points keep on falling and the injuries seem to mount for Tanguay. If he even comes close to 50 points this season, I will be shocked to death. Reuniting a line that did not work the last time around is just history waiting to repeat itself. Some people never learn at all.

7. Simon Gagne, LW, Tampa Bay Lightning: This pick is a bit of a risk, but Gagne has some serious injury concerns and they have to be mentioned as he already has nearly been injured once in the preseason. The reality is anyone can, but Gagne seems to find the Injury Ninja way more than most can. His point per game potential is there, but so is an injury that would cause him to miss 30-to-40 games and that would kill your team.

8. Dustin Penner, LW/RW, Edmonton Oilers: Penner was one of the hottest players last October and then Ales Hemsky got hurt and Penner went downhill. This season, Penner is not the main course in Edmonton. It is all about the kids, so expect another downturn and more disappointment for the forward.

9. Vincent Lecavalier, C, Tampa Bay Lightning: Sixty-nine points was all Lecavalier could muster last season on a team full of some considerable talent. Vinny did play with Steven Stamkos and Martin St. Louis a good bit, but some will say even Steve Downie played with more heart than Lecavalier. For whatever reason, expect more of the same this season and watch the Lecavalier to Montreal rumours heat up by the end of February once again.

10. Brian Rolston, C, New Jersey Devils: Rolston could still be the odd man out in New Jersey, but should make the team. However, his production has declined so much that he is a bust without benefit of the doubt. If you see a league draft and it is late, still avoid Rolston at all costs. Remember when that was crazy talk? Yes, I do too.

By Chris Wassel
This entry was posted on Tuesday, September 28th, 2010 at 7:54 pm and is filed under 2010-11 RotoRob NHL Draft Kit, Busts, Cheat sheets, Chris Wassel, HOCKEY. You can follow any responses to this entry through the RSS 2.0 feed. You can leave a response, or trackback from your own site.