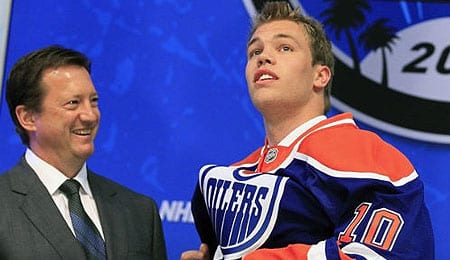 Oiler fans can’t wait for Taylor Hall (right) to bring the team back to prominence.

And it is complete. With the release of our final cheat sheet, your 2010-11 RotoRob NHL Draft Kit is now done. So while you wonder how 2009-10 rookie sensation John Tavares will do in his second season, let’s take a look at some of the best rookies of this season’s class.

1. Taylor Hall, LW, Edmonton Oilers: The first overall pick in this year’s draft won’t turn 19 until a month into the season, yet he’s expected to play a large role on a very young, rookie-laden Oiler squad. Hall proved he’s ready with a dominant season in Junior last year, as he potted 40 goals, 66 assists and 106 points in just 57 games for the Windsor Spitfires. The only draft eligible player on Team Canada’s last WJC entry, Hall would have been drafted extremely high in 2009, but he wasn’t eligible because of his late 1991 birth date. Speedy and offensively creative, Hall has a chance to develop into a top 10 scorer in time, but it’s realistic to expect him to struggle at times as a rookie.

2. Jordan Eberle, RW, Edmonton Oilers: Did we mention that the Oilers are young and filled with rookies? Eberle has a chance to become a staple in Oil town as he’s already developed a reputation as a clutch performer. Anyone that saw him pot huge goal after huge goal for Team Canada at the WJC knows that this kid has a penchant for rising to the occasion. Already an offensive force, Eberle is committed to becoming a solid two-way player, a trait that will serve him well at the pro ranks. The Oilers are considering playing Hall at centre on a line with Eberle and Magnus Paajarvi Svensson, the team’s third super rookie. Talk about a kid line! Eberle’s had a nice preseason, but like Hall, he’ll take his lumps from time to time once the games start to count.

3. Tyler Ennis, C, Buffalo Sabres: Ennis is brimming with offensively skills and is an especially dangerous one-on-one player. The soon-to-be 21-year-old (he’ll reach drinking age next week) certainly didn’t look out of place in his first taste of the NHL, averaging almost a point per game in his ten-game trial with the Sabres last season. Given his slight size (5’9”, 163) and skill, Ennis draws obvious comparisons to a former Buffalo great – Daniel Briere. Ennis has already impressed many in his brief NHL look; in a full season, he’ll be opening plenty of eyes. Expect Ennis to go off the board in the middle rounds (say, around round 13 in a 25-round league).

4. Jonathan Bernier, G, Los Angeles Kings: Bernier is ready to be a starting goalie in the NHL, but he’s on a team that already boasts a fine young goalie in Jonathan Quick. The 22-year-old Bernier was the Kings’ first round pick in 2006 (11th overall) and he looked really strong in the three games he played with the big club last season. Poised beyond his years, the Quebec native is very calm between the pipes and he shone in the AHL last season, recording a 2.03 GAA, .936 save percentage and nine shutouts. He’s expected to back up Quick this season, but don’t be surprised if Bernier forces a time share before the season is up. At the very least, Quick won’t be manning the net nearly as much as last season, when he logged a ridiculous 72 games. And if Quick falters at all, the Kings won’t hesitate to turn to Bernier.

5. P.K. Subban, D, Montreal Canadiens: Subban is incredibly talented, first opening our eyes at the 2009 WJC, where he shone for Team Canada. The 21-year-old, the Habs’ second rounder in 2007, has already become a fan favourite in Montreal based on his strong play in last spring’s surprising playoff run. This kid should be an anchor on the Canadiens’ power play unit for years to come. Subban is a very exciting player, but he’ll have to tone that done just a bit to avoid making too many mistakes.

6. Nazem Kadri, C, Toronto Maples Leafs: Kadri brings something to Toronto that the team desperately needs – experience winning, having helped the Kitchener Rangers make it to the Memorial Cup final in 2008. He’s a tall kid, but questions persist about whether he’s strong enough to survive in the NHL. Still, Kadri is a skilled player capable of making the highlight reel with some of his plays. He’s currently fighting for a job with the big club, but even if he doesn’t make it (and a trip to the minors is looking probable), I expect Kadri to be heard from at some stage this season.

7. John Carlson, D, Washington Capitals: Carlson has all the tools necessary to succeed as an NHL defenseman. He’s big, fast, smart and has serious skills. Given how much PT the Caps gave him in the playoffs, it’s obvious they already are on board with him as a key staple of their blueline. To think that one day Carlson will be competing for Norris Trophies is not a stretch, but for now he’s a young defenseman with a ton of upside and one that will see a ton of ice time.

8. Tyler Seguin, C, Boston Bruins: While Taylor Hall was expected to be the No. 1 overall pick in the 2010 draft seemingly forever, in the weeks leading up the draft, Seguin closed the gap and some thought he might have a chance to be taken first. He really was a bit of a late bloomer, as no one thought he’d be as splendid a junior player as he became. This Canadian kid has a chance to become a superstar in the NHL and the fact that he accomplished so much as a junior without having the kind of talent that Hall played with suggests that in time Seguin could be the best player of the 2010 draft class. Seguin may have to step in on the Bruins’ top line to begin the season with Marc Savard still dealing with concussion problems, so don’t sleep on him too long on Draft Day.

9. Cody Hodgson, C, Vancouver Canucks: Hodgson can fly, but unfortunately he may be headed to the AHL for a deep Canuck squad. He definitely has skill, if not grit, and projects as a second line playmaking centre. Hodgson is another rook that may not begin the season in the NHL (although he still has a decent chance to stick as of this writing), but will be heard from before long.

10. Kyle Beach, C, Chicago Blackhawks: Beach will have to start the season in the minors, but after the defending champions had to shave a ton of payroll in the offseason, he should get his chance soon. There were questions about his attitude leading up to the draft, but there’s no doubt his ability to be an agitator will be an asset to the Hawks in time. Beach’s competitive spirit and feistiness will stead him well once there’s an opening for him in Chi-town.

By RotoRob
This entry was posted on Saturday, October 2nd, 2010 at 1:54 pm and is filed under 2010-11 RotoRob NHL Draft Kit, HOCKEY, Rookies, RotoRob. You can follow any responses to this entry through the RSS 2.0 feed. You can leave a response, or trackback from your own site.