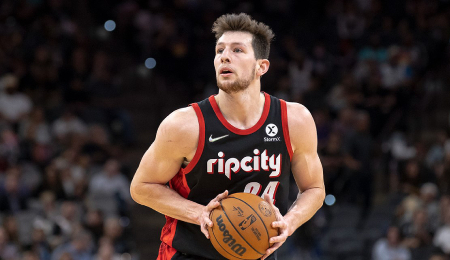 Welcome back to another week of Fantasy basketball. February has arrived and we’re nearly two-thirds of the way through the season, so be sure to harvest the waiver wire!

This week, LeBron James has pulled within 63 points of becoming the game’s all-time leading scorer; things got testy in Cleveland on Thursday, leading to All-Star Donovan Mitchell getting ejected; and Giannis Antetokounmpo is on fire, scoring 50 or more three times in the last 11 games (for context, he’s done this five times in his career).

Drew Eubanks, PF/C, Portland Trail Blazers (ESPN: 3.1 per cent; CBS: 17 per cent): In late-March, we gave Eubanks a nod, and it turned into one of our best picks of the season as his touches kept rising in April. Unfortunately, this season has been a slog as his PT has really dropped and he’s mostly been coming off the bench. However, with Jusuf Nurkic (calf) out, Eubanks moved back into a starting role, and while “stupid mistakes” led to him being in foul trouble on Friday (see video below), he showed what he can do on Wednesday with a double-double. Consider Eubanks a short-term sleeper pick given how hard he works and his rebounding potential.

Aaron Nesmith, SF, Indiana Pacers (ESPN: 1.4 per cent; CBS: 14 per cent): Didn’t we just pimp Nesmith at Christmas? Yup… but he cooled off a bit since then despite getting more PT. Well, he’s heating up again with four straight double-digit scoring games and his teammates are really noticing the growth. Nesmith has been providing good value all season, but over the last week, he’s absolutely killing it from downtown, so if you need treys, this is your guy.

Seth Curry, PG/SG, Brooklyn Nets (ESPN: 18.8 per cent; CBS: 29 per cent): When we last checked in on Curry, he was dealing with COVID, and (perhaps because of this) he was fairly inconsistent over the rest of that season before enjoying a solid effort in 2021-22. Now he’s been getting a chance to start while Ben Simmons (knee) is sidelined, and while he hasn’t necessarily blown up, the PT has been there. In January, Curry was shooting away from downtown, averaging a season-high 5.5 attempts per month, so if you need treys, he’s a great option. One concern is that he could lose PT if Brooklyn adds wing help at the deadline (Jae Crowder, perhaps?); of course, Curry could be dealt himself, which could be a boost to his value considering how good a shooter he is (assuming he lands in a situation that provides him with more touches).

Patrick Beverley, PG, Los Angeles Lakers (ESPN: 8.7 per cent; CBS: 11 per cent): When Beverley isn’t getting suspended or playing cupid, he occasionally offers up some decent value. He went on a scoring binge last week, has been seeing extra PT of late, and even when the touches aren’t there, he’s contributing in other ways (four assists, three steals and two blocks on Thursday, when he moved back into the starting lineup). As for Beverley’s touches, they’ve been rising all season long, so that trend — combined with playing his most minutes since 2018-19 — makes him worthy of Fantasy consideration, especially in deeper formats.

Monty Python consisted of Graham Chapman, John Cleese, Terry Gilliam, Eric Idle, Terry Jones and Michael Palin. Among their many classic skits, one of our personal faves (and among their most popular ever) is “Nudge, Nudge.”

So let’s not even consider the possibility that Cabrera is anything but HoF worthy. It’s preposterous to suggest otherwise.

The Wire Troll: Nikita Zadorov Filling Cracks for the Flames

Even if Pastrnak has been extremely fortunate with his puck luck this season, Zacha is sure to benefit, and we’ve seen that lately, with seven points over the last six games. Taken sixth overall in 2015, Zacha has taken some time to fully develop, but now that he has, Fantasy owners would be wise to take advantage.

By RotoRob
Posted in HOCKEY, RotoRob, The Wire Troll | Comments Off on The Wire Troll: Nikita Zadorov Filling Cracks for the Flames

Sure enough, Powell played a season-high 33 minutes on Friday, and while the production wasn’t eye-popping, he still flirted with a double-double while recording a pair of steals. His PT has been rising all season, so we’re curious to see what he’ll do when consistently getting 30+ minutes per game. Powell is still mostly a full-time starter, but not necessarily used to the same load he was before his Achilles’ injury a few years ago. Consider him a deep league option with some possible upside in standard formats.