The Wire Troll: Mark Recchi Ready to Turn it On? 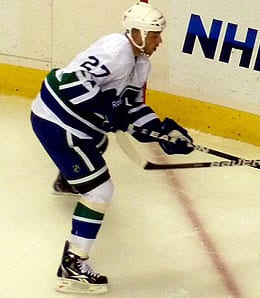 The loss of Manny Malhotra is a bitter pill for Fantasy owners.

It is often said that there are times when less talk is so much better. This is one of those times. When Fantasy oweners wake up this morning, they are going to see one of the most sobering statistics anyone could ever imagine. There is a number that causes fear now even amongst the experts.

What is that number? Well try this one out for size: 151.

It is just a number right? We took a deep look at several different NHL injury reports and that is the number of players that are currently injured. The bottom line is over one in five NHL players are not quite 100 per cent. The reality is that Fantasy hockey general managers have had a nightmare of epic proportions all year, but particularly since the injury to Sidney Crosby. Forget that there have been more injuries to high impact Fantasy players than in years past, but even the mid-level players that can help you with certain categories are getting hurt.

Look at a guy like Henrik Lundqvist for example. Even he is day to day with what is being termed a stiff neck. But the one injury that potentially could hurt for Fantasy owners is the loss of Manny Malhotra. Players that win a ton of draws and chip in scoring wise are very hard to find. Malhotra is that type of guy and the loss for Vancouver could be immeasurable and in your Fantasy league, replacing him will not be easy.

A couple weeks ago we recommended David Moss from the Calgary Flames and almost like clockwork, sadly, he got injured. That is the danger this season. Health on your Fantasy teams has become such an unexpected premium.

Where does the blame fall? Fantasy owners definitely have a right to know why this is all happening. Simply put, I believe the many back-to-backs this season along with curious scheduling has created an environment for injuries. Also, players are just dropping like flies because they cannot quite stay in a rhythm. The body is like a temple and if anything disrupts that rhythm, then look out. Another key is that players cannot be at their healthiest 100 per cent of the time either. It is a very delicate balance.

So what do you do with all these injuries? Well, you have to pick up bodies, don’t you? The playoffs are here and there’s only about three weeks left in the Fantasy hockey season. Let’s do this fast.

Mark Recchi, RW, Boston Bruins: Yes, his production has dropped some since Patrice Bergeron and Brad Marchand began to slump a bit, but it may be time to get Recchi back in the lineup. The reality is when playoffs start to near, that is when Recchi begins to find the fountain of youth. Expect a bit of a return to Fantasy relevance in the next few weeks.

Mike Knuble, RW, Washington Capitals: Finally Knuble is starting to play like Knuble. In playoff like warfare, you need a soldier like this if you want to succeed so if Recchi is not there then maybe Knuble is. When you play with the likes of Alex Ovechkin, Alexander Semin, or even Nicklas Backstrom, both the player and the Fantasy GM benefits this time of year. While Knuble is less available in leagues (about 40 per cent ownership) compared to a guy like Recchi (30 per cent), he is a bit younger and plays with a bit more firepower. Get him quickly.

Matt Moulson, LW, New York Islanders: How can a 30-goal scorer only be owned in about 40 per cent of leagues? Well, when he is an Islander, that can often happen. With the Islanders having really nothing to play for over the last bit, expect Moulson to put up a goal every other game or so from here on out, a pace that Fantasy hockey GMs often crave. When John Tavares feeds you the puck, that helps too. Give Moulson credit, he has constantly produced as an Islander and in leagues with a higher concentration for goals, he is an easy decision. Pick him up now.

Well, good luck in your leagues this week and just think — in a few weeks, it will all be over. Then there will be playoff hockey, Fantasy style. Until then, comment away and do not forget to check out the old Twitter and Podcast for more Fantasy hockey information.

By Chris Wassel
This entry was posted on Sunday, March 20th, 2011 at 11:55 am and is filed under Chris Wassel, HOCKEY, The Wire Troll. You can follow any responses to this entry through the RSS 2.0 feed. You can skip to the end and leave a response. Pinging is currently not allowed.