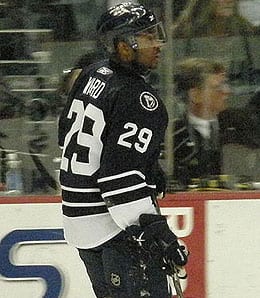 Joel Ward is getting more ice time, but hasn’t taken advantage of it.

The Predators got off to a great start, earning points in each of their first eight games, but after getting dumped 5-2 by the Wings Saturday, Nashville has now dropped two straight in regulation. Joel Ward, off to a sluggish start and without a point in the previous three games, enjoyed his finest performance of the season for the Preds, scoring once and going +1 with three shots on goal. He’s a bit of an enigma, as in each of the last two seasons, he’s seen an increase in ice time, yet his stats have slipped. What up with that? At least he had another minor penalty Saturday, running his season total to eight PMs after managing just 18 last season. Ward’s getting enough ice time to be useful, but at this point, we’d suggest waiting for him to string together some decent efforts before even considering him as a Fantasy option.

Everyone was wondering what was wrong with the Pittsburgh Penguins after they lost to the Flyers at home on Friday night, dropping to a .500 record. Well, the Pens have the swagger back after waddling into Carolina and shutting down the Canes 3-0 on Saturday. However, the Penguins’ power play continues to struggle, going 0-for-2. We expected their PP to be much better this season after finishing tied for 19th in 2009-10 at 17.2 per cent, but it’s actually worse, clicking at just 12.9 per cent (21st in the league).

Sidney Crosby has scored three power play goals, but has managed just one assist with the extra man. Huh? Well, at least he finally put up a crooked number Saturday, logging a pair of assists for his first multi-point game in nine days. Another good sign is that he managed to fire five shots on net after mustering only one against Philly. No one’s disputing Crosby’s place as one of the best players in the game, but as such it’s his responsibility to lift the Pens out of this sluggish start. Saturday, he did his part, but things don’t get any easier with Pittsburgh headed to Dallas on Wednesday.

The loss dropped Carolina to .500, and it is now under .500 (1-2-0) at home, having suffered a pair of 3-0 losses on its own ice. In fact, the Hurricanes have exactly one goal in regulation at home and we’re over three weeks into the season. Um, ya. Gotta love that home cooking.

Cam Ward was in net for Canes Saturday, and he was middling, saving 28 of 31, as his GAA inched up to 2.75, a bit of a worrisome trend. Ward’s save percentage has been strong this year, but he hasn’t quite lived up to our pre-season billing as a top 10 goalie, although he’s not far off. The thing is, he’s really being victimized by the volume of scoring opportunities Carolina is surrendering. Just twice in the first ten games have the Canes allowed less than 30 shots, and even when they didn’t it was pretty close to the 30 mark (29 and 28). Three times already the team has been peppered with at least 42 shots, including Friday night when Ward looked great, stopping 40 shots.

The Boston Bruins are off to a good start (6-2-0), and one of the reasons why is they are getting good secondary scoring. While everyone is focused on super rookie Tyler Seguin, let’s not forget about another solid freshman that, so far, has matched Seguin goal for goal – Jordan Caron. Caron potted his third goal in seven games Saturday, going +1, and seeing over 15 minutes of ice time for the second straight game. We originally expressed surprise that Caron was a first round pick last year, but the way he’s generating offense, he’s justifying that status. The fact that he doesn’t make enough to be a serious cap hit for the Bruins is also a bonus, as it means Boston is more likely to keep Caron around, even if his play tails off a bit, In deeper leagues, Caron is a good waiver wire add, and he’s someone you need to put on your radar in a standard-sized league.

We got a glimpse of what’s wrong with Ottawa this season when last night it allowed back-to-back breakaways near the end of the second period, the second of which Milan Lucic converted against Brian Elliott to put the game away for the Bruins. Elliott has been playing better lately (until Saturday, that is), but overall he’s been a disappointment so far, another reason why the Senators are struggling. We expected Elliott to be a top 25 goalie this season, but he’s barely been a top 45 netminder after taking some serious bitch slapping earlier in the season. He only saved 21 of 25 shots Saturday, lowering his save percentage to .894 after putting up a career-best .909 last season. Sure, he did stone Nathan Horton on that first breakaway late in the second, but he isn’t exactly seizing his opportunity to take the job and run with it while Pascal Leclaire (groin) is out. Expect Elliott to remain a low-end Fantasy option until Leclaire comes back, at which point, the two should gradually shift into a timeshare.

The Florida Panthers salvaged a win on their three-game eastern Canadian swing by beating Montreal 3-1 on Saturday. David Booth enjoyed his visit, picking up an assist in Ottawa on Thursday, and then scoring the game-winning goal on a penalty shot against the Habs. So far, so good for Booth, as he’s remained healthy and potted four goals and four assists through the first nine games, and he’s seeing a bit more ice time. We expect him to be a top 15 left wing this season as long as he avoids injury. And last night, Booth was probably Florida’s best forward, ripping six shots on goal and going +1. He remains a must-start while he’s healthy, and is a good bet this week with four games on tap for Florida.

By RotoRob
This entry was posted on Sunday, October 31st, 2010 at 12:55 pm and is filed under HOCKEY, NHL Today, RotoRob. You can follow any responses to this entry through the RSS 2.0 feed. You can leave a response, or trackback from your own site.