A Conversation with Michael J. Fox 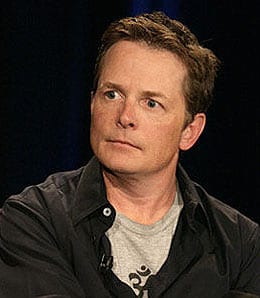 Michael J. Fox is an inspiration to one of WIND’s contest winners.

The five winners of WIND’s Best Conversation Ever contest have been getting their dream conversations over the past few months, and Calgary native April Taylor, 25, recently had hers with actor Michael J. Fox.

Taylor, whose winning entry can be found here, pledged to donate $0.50 for every vote she received to the Michael J. Fox Foundation, something that helped the foundation be one of the winning charities. So not only did his foundation get a $100,000 donation in that component of the contest, but Fox also selected it for WIND’s donation, meaning that the MJFF received $200,000 from WIND.

April chose Michael for her Best Conversation Ever because his book Lucky Man had a profound influence over her at a time when she was suffering with anxiety. His constant positive outlook throughout his own struggles with Parkinson’s inspired April to change her outlook on life by always focusing on the positive.

As with all the winners, I was given the opportunity to ask a few exclusive questions. Here’s my exchange with Taylor:

RotoRob: What surprised you most about Michael?

April Taylor: How genuinely interested he seemed in my life and what I had to say. I wasn’t sure how to start off the conversation and didn’t know how to start asking him questions. He dove right in and started asking me questions about what I do, my dog, hockey and various other things that he knew I was interested in.

Also, at the end of the conversation he said he would send me some stuff in the mail and write some messages on it for me. But then he added the personal touch of saying perhaps he would throw in a bone for my dog, Maggie May. Then he closed off by saying he hopes he can always help me through my hard times, and hopes that he can be there through his books like he has been before.

I always knew he was a nice, personable guy. But the personal touches and care he put into the conversation really meant a lot and helped seal my already stellar opinion of him.

RR: What was the funniest thing he said to you?

AT: Throughout the conversation, Michael made many little jokes that made me laugh. One of the things that made me laugh the most was when I told him how I ended up liking the New Jersey Devils. He laughed and said “so you started liking the team out of spite? Well… that’s alright!” I never really thought about it that way, but he just threw it right out there. I later told my brother and we thought it was funny.

RR: How did this conversation change your life?

AT: This conversation gave me the opportunity of a lifetime, to be able to talk to someone who has had such a big impact on my life. It’s not very often someone gets the chance to talk to an idol of theirs. It made everything so real to actually hear his voice and have a back and forth conversation with Michael. Anytime I feel down or sad I remember different parts of the conversation and it makes me smile and happy again. I also feel so happy that because of that conversation I was able to help the Michael J. Fox Foundation in a huge way with the $200,000 donation it ended up receiving. Michael explained to me what kind of impact that would make to the foundation and I am so pleased. Not only did the conversation help and affect my life, but it helped the foundation to help thousands of others suffering with Parkinson’s every day.

RR: Who is your favourite NHL team and why?

AT: My favourite NHL team is the New Jersey Devils. It started off many, many years ago when I was watching hockey with my brother. His favourite team is the Toronto Maple Leafs and they were playing against New Jersey in one of the final rounds. To bug my brother I started cheering for New Jersey and would say the name of every player I saw on TV stating that they were my favourite. When I told Michael this on the phone, he laughed and said “liking a team out of spite, that’s alright!”

However, I started to watch more and more of New Jersey’s games and actually stuck with the team, learning more and more about them. My favourite player on the team is Martin Brodeur. He is one of the best goalies in the history of the NHL and continues to break records and prove he is one of the best. The Devils only come to town every two years, but I always make sure I get a ticket to that game!

RR: How are the Flames going to do this season?

AT: Well, for the sake of the fans and my hometown, I hope they do better than last year and make the playoffs. But for the sake of bragging about my team in the office and with my friends, I hope New Jersey does better!
I do hope the Flames pull it together a bit, and manage to make the playoffs. But I’m thinking they could go to the first round, and maybe next season could make it even further.

By RotoRob
This entry was posted on Saturday, September 17th, 2011 at 10:42 am and is filed under Contests, RotoRob. You can follow any responses to this entry through the RSS 2.0 feed. You can leave a response, or trackback from your own site.