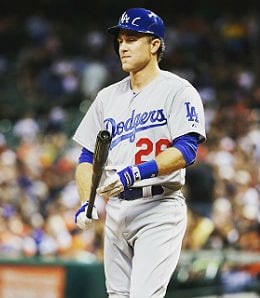 Chase Utley has to be better than he was last year. Right? (m.mlb.com)

Last season was the worst of Chase Utley’s fantastic career — by far. And while he was slightly better after getting traded to the Dodgers, for Fantasy purposes, we were more interested in one of the players that Philly got in the deal.

Perhaps the biggest impact Utley made came in the postseason, when his hard and extremely controversial slide (see video below) wound up breaking Ruben Tejada’s leg — and earned Utley a two-game suspension.

The bottom line, however, is that for the first time in his career, Utley was a below replacement level player. As great and as celebrated a run as he’d had in Philadelphia, it was time for the Phillies to move in a different direction and get whatever they could for him.

The soon-to-be-37-year-old second baseman hit even worse for the Dodgers, although he was a bit more palatable for Fantasy purposes because he got on base more often and hit with a tad more power.

Getting back to the playoffs for the first time since 2011, Utley was 1-for-3 with a run in limited action — as mentioned, the hit on Tejada being his biggest contribution to the 2015 postseason. Tejada, probably the Mets’ best defensive shortstop, is currently recovering.

Utley, a free agent this winter after LA declined his 2016 option last month, may return to the Dodgers — but not as a starter. They’d like him back so he can be the main reserve at first, second and third base. The Angels — who tried to acquire him at the deadline — are also kicking his tires, as are the Padres, so it sounds like there’s a good chance Utley will remain on the left coast, in what could be his final season.

He doesn’t seem like a good match in San Diego. Didn’t the Padres go down the road of the overpriced veteran with their free agent/trade frenzy last year? That didn’t work out so well, did it?

Utley, the 15th overall pick way back in 2000, is a California native, so no surprise he’d like to end his career there, preferably with a team that has a chance to actually win it. Despite his injuries last year, he has averaged 539 plate appearances over the last three years. Still, there’s no doubt health remains a concern at this stage of the game.

Utley’s batting eye regressed last year, he hit ground balls at a higher rate than ever (hence the power outage even with a slightly better HR/FB percentage) and he swung at more pitches outside of the strike zone (though it was just a modest increase).

So could Utley rebound? Absolutely, to an extent. You need look no further than his .230 BABIP last season as evidence that his results were skewed. We expect Utley to be somewhat more productive in 2016, but Fantasy worthy? That could be a stretch in anything other than very deep single league formats — unless he takes advantage of a injury to a starter (again, assuming he signs as a backup).

The UCLA product was considered a tremendous batting prospect when he was scouted as a college kid, and was compared to the likes of Todd Walker and Adam Kennedy, two of the better offensive players at the keystone corner at the time. Clearly, Utley wound up having a much better career than either of those players, and now, over 1,500 games into his career, he sits within shouting distance of 1,000 runs, 250 homers and 1,000 RBI — some impressive numbers for a second baseman.

Utley’s numbers are not Hall of Fame worthy, but for what it’s worth, Baseball-Reference.com lists him as being most similar to Joe Gordon, a Hall of Famer considered among the best 20 second baseman in baseball history.

Now it’s your turn. Let us know in the comments below where you think Utley will wind up and what kind of production will he deliver.

By RotoRob
Tags: Chase Utley, Los Angeles Dodgers, MLB
This entry was posted on Friday, December 4th, 2015 at 2:44 pm and is filed under BASEBALL, Free agents, Player profile, Rumours, Scouting Report. You can follow any responses to this entry through the RSS 2.0 feed. Both comments and pings are currently closed.