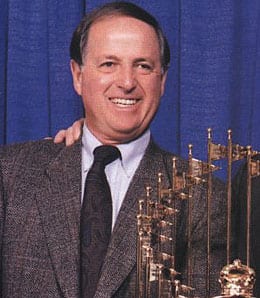 Even Pat Gillick couldn’t save the Phillies in their current situation.

There’s no way to avoid it. If last year didn’t make things crystal clear, then an eight-game losing streak in late-July that has dropped them closer to fourth than third place in the NL East has to have made it obvious – the great run of the Philadelphia Phillies is over.

Time to blow it up.

Hell, even their special assistant to the GM, Pat Gillick – the man responsible for being so many great teams – couldn’t save this mess.

The offense is weak (only three teams have scored fewer runs) and the pitching staff (despite somehow having the fourth most quality starts in the majors) is near the bottom thanks to an awful bullpen and an underperforming rotation.

Yes, things are a mess in the city of Brotherly Love these days, and it’s time to salvage things by trimming some serious payroll and rebuilding.

Cliff Lee is on the block, possibly heading to Boston, although reports suggest that the BoSox are balking at the price. Atlanta, Cleveland, St. Louis, Pittsburgh and the Dodgers are other possible suitors.

Several teams are also asking about Chase Utley, although Philadelphia apparently has no interest in dealing him. Why the hell not? Are the Phillies seriously planning on giving this fragile dude an extension? Sure, he can still pick it on D from time to time (as witnessed below), but he’s been on the downward trajectory of his career for years.

Jimmy Rollins is another player the Phils would be wise to move, but he has a no-trade clause and doesn’t seem inclined to lift it. Great. That means the Phils are stuck with him until the end of 2014, at the very least.

Michael Young is another player the team would like to dispatch, and given the need for third basemen, he’s very likely to be packing his bags over the next couple of days – possibly heading to the Yankees or the Red Sox.

Meanwhile. Philly will try to stop the bleeding Tuesday at home against the Giants, who are also struggling. It’s been nearly 14 years since the Phils dropped as many as nine straight games, so hopefully they can put the brakes on what’s shaping up as a monumental slump.

It’s not as if they’ve even been competitive during this skid – the Phils have been outscored 52-14. Let that roll around your brain for a while and try to tell me that this team is capable of digging its way back into an NL Wild Card race that it has now fallen nine games back of.

We think not. Blow it up, Philly!

Now it’s your turn. In the comments below, Tell us what you would do if you were the Phillies’ GM.

By RotoRob
This entry was posted on Tuesday, July 30th, 2013 at 12:34 pm and is filed under BASEBALL, RotoRob, Rumours, Team report, Trade Deadline. You can follow any responses to this entry through the RSS 2.0 feed. You can skip to the end and leave a response. Pinging is currently not allowed.