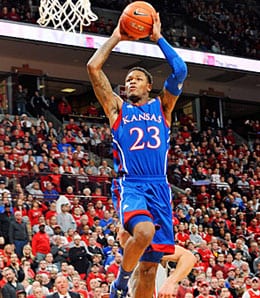 Could Ben McLemore go first overall despite his issues?

Last week, we released our 2013 NBA Mock Draft, and with the big even just two days away (things kick off Thursday at 7 p.m. EST), today we’re going to offer up a few draft-related rumours.

Picking first, the Cleveland Cavaliers reportedly will not be dissuaded by all the baggage Kansas shooting guard Ben McLemore brings to the table. It’s by no means a certainty that McLemore will go No. 1, but the fact that the redshirt freshman had issues with his representatives that necessitated NCAA investigation and that he failed to impress in workouts has scared some teams off. The Cavs are not one of them, apparently. Besides, McLemore could be the most sure thing in this somewhat uninspired draft.

Nerlens Noel, our projected No. 1 pick, remains the best available player by most accounts. We’re sure Orlando will be pleased as punch to grab him second if Cleveland selects McLemore.

Still, the Cavs need a big centre that will play beside Tristan Thompson over the long haul. Noel (even with the torn ACL), or Maryland’s Alex Len (who certainly doesn’t lack confidence, as you can see in the video below) are their best bets.

Cleveland has received offers for the No. 1 pick, but obviously hasn’t been entranced by any of them. Minnesota reportedly offered up Derrick Williams and the No. 9 pick for the top overall selection, but that’s unlikely to work. The Thunder is also apparently going hot and heavy after Cleveland’s top pick.

Sacramento wants to land a second first round pick and is dangling Jimmer Fredette to try to make it happen. Apparently, discussions have taken place about the picks of Utah (21) and Indiana (23).

Could Anthony Bennett be the best big available? Certainly, his jump shooting ability will allow teams to stretch the floor by bringing the opponent’s big man out from under the rim. We’ll be interested to see if he lands in Nawlins as we projected.

Phoenix, which pick fifth, is reportedly in love with Victor Olapido, so it’s likely going to wait to see if slides that far (doubtful). if Olapido goes earlier, the Suns might be willing to trade their pick.

Detroit really needs to add scoring help with the eighth pick. Our projected Piston pick, C.J. McCollum, would do the trick. So would Shabazz Muhammad.

Golden State is one of three teams (Miami and Toronto are the others) without a single pick. Don’t anticipate the Warriors making a splash for a first rounder, but they could sneak into the fray and deal for a second round pick.

Hernandez didn’t even look that sharp in his two Triple-A tune-up starts before getting slaughtered in the bigs. And as bad as his results were, an abnormally low .250 BABIP suggests they could have even worse.

The Battle For Zack Greinke

But back to the battle for Greinke. Texas seems to be at the centre of the winter meetings and pretty much every rumour of substance involves the Rangers to some extent.

By RotoRob
Posted in BASEBALL, RotoRob, Rumours | Comments Off on The Battle For Zack Greinke

While Ryan didn’t get an interview, you’d have to think if he was legitimately interested in returning to a GM post, the Mets would have wanted to talk to him. Having said that, based on reactions on the Mets’ page on Facebook, the team’s fans are quite stoked about having Alderson as the man charged to turn things around.

By RotoRob
Posted in BASEBALL, RotoRob, Rumours | No Comments »

Closer Watch: Who Will Get Saves for Braves?

Soriano could be headed to the Yankees, but if not, it might be Gonzalez headed there. Gonzalez could also find his way back to Pittsburgh. Either way, it’s quite conceivable they will both be gone from Atlanta.