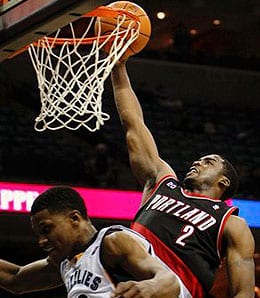 Wesley Matthews has been one of the few bright spots for the Blazers.

In a rotisserie league, would you trade Pau Gasol and Paul Pierce for Jason Richardson and Dwight Howard?

This deal is close — real close, so the deciding factors here are your specific needs. On its pure face value (based on what they’ve done so far), you lose this trade by the slimmest of margins, however, you’re making the trade based on future value, and that’s where I think you win, because Gasol’s value will slip once Andrew Bynum returns, plus you need to be a tad worried about his hamstring issues.

By making this deal, you’re going to garner a slight boost in scoring, a nice gain in 3-pointers, a slight lift in rebounding and a decent bonus in steals, while FG percentage is virtually a wash. The blocks category is basically even here as well.

Where you’ll slide is in assists (although that’s not a huge factor with no point guards invoived — still, Gasol is a very strong passer for a big man, and Pierce pitches in some, whereas J-Rich and Superman offer next to no dimes), and FT percentage. This is the real killer for you in this deal, because Howard can bring a team down. So if the rest of your team consists of stronger FT shooters, or you’re willing to more or less tank the cat, then don’t sweat it.

Overall, though, I really, really like this deal for you. Do it and do it now!

I’m looking for advice for trades to pull, as I am in ninth place and struggling all around.

The other nine teams:

Well, this is a pretty open-ended question, but I’ll do my best to advise you.

My first inclination would be to suggest floating Nash, but you’re not exactly set for assists without him (at least until Flynn comes back and takes the starting gig), so you really need to hold onto him for now. If there’s any way you can deal Roy for someone like Stuckey, Calderon or even Conley, that would work well for you because then you’d be open to dealing Nash for the best you can get.

Obviously, you won’t be able to get full value for Roy, but if you can land a dependable source of assists, you’ll be free to deal one of your best assets to a team that is weakest in assists (Team Nine looks like your best candidate). Depending on what category you specifically want to target, you can ask for Love and Battier (the latter of whom will provide low-level help in almost everything).

Other notes: I’m a bit surprised that McRoberts and Flynn are even owned in a ten-team league with 13-man rosters. Surely there are better options on the wire? Don’t get me wrong — I think Flynn could be great once he returns, but if you’ve been holding him for a long time in a shallow league, you’re really taking a big chance. Also, I love what I’m seeing from McBob lately, but in such a shallow league, there must be better options on your wire. For instance, I see that J.R. Smith is unowned in your league, and he’s been lighting it up lately, so I’d grab him and drop either Flynn or McRoberts.

By RotoRob
This entry was posted on Friday, December 10th, 2010 at 2:53 pm and is filed under BASKETBALL, Dear RotoRob, RotoRob. You can follow any responses to this entry through the RSS 2.0 feed. You can leave a response, or trackback from your own site.