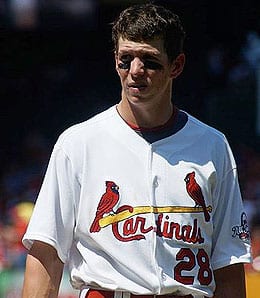 If you’re dealing Colby Rasmus, you better be getting back a sure thing.

I’m playing in a 6×6, 11-team league in which we carry eight reserves. We count losses and Doubles & Triples as the two extra categories. I have Colby Rasmus, Mat Latos and Matt Capps and I have been offered Kendrys Morales, Chase Utley and Koji Uehara for my three.

There are a few free agents that we have unlimited access to, but since every team has at least 3-to-4 pitchers in reserve it is kind of thin.

For now I’d plug in one of Matt Joyce, Alex Avila or Ty Wigginton.

So do you think I just do the trade? Latos is the key here I think.

The last update I saw on Morales was that he was still having acceleration issues. The best case scenario for his return is probably the end of May, I’d guess. Utley is at least two weeks from starting a rehab stint, assuming all goes well between now and then, so he’s probably another end of May situation at best.

Rasmus is currently hitting near the top of the order in St. Louis and has three homers, 10 RBI, 17 runs scored, and two thefts. I like him big-time this year and believe a breakout is a very solid possibility (as we’re already seeing).

Latos is giving up too many homers in the early going, but is still a solid option in your rotation. He’s struck out 20 in 16 2/3 IP and his WHIP is solid. He also struggled last April so I think he rights the ship and enjoys a solid season moving forward.

I’d also get Beachy active over the struggling Hudson. I had the opportunity to watch Beachy in his last start and really liked what I saw.

Looking at the two relief pitchers in this deal I’d have to say you’re giving up more than you’re getting. Yes, Uehara has the potential to close in Baltimore, but he has also demonstrated that he is about as fragile as they come and could very well end up back on the DL at some point. Capps has the job for at least the next month and perhaps longer. Coming off Tommy John surgery, Joe Nathan is not guaranteed to get his job back and, as we’ve seen, he has a ways to go before getting back to his outstanding pre-surgery levels of control.

There is simply too much risk in this deal and I’d pass in very quick order. The price you have to pay for the potential you may get is simply skewed too much against you. I hope this helps and good fortunes with your Fantasy League play over the duration of 2011.

In response to my tweet that Mariano Rivera had blown back-to-back saves, @bfentress asked me: Who is next in line to close for the Yanks?

My response: David Robertson, but no way anyone but Mo earns saves for the Yanks unless he gets hurt or finally hangs ’em up.

He came back with: So no Rafael Soriano possibility in NY?

My response: Only if he (a) gets healthy; (b) starts pitching much better; and (c) Mo gets hurt. That a lot of things to happen, but it could.

Next up, @Hhartman8 asked me: You expect Mitch Moreland to continue to get ABs? Has some average numbers. In a 10-team mixed league, would you drop Chone Figgins/Mark Reynolds for Mitch?

My response: I expect him to have the job for the duration. Figgy = SBs. Reynolds = HRs. Moreland = BA, decent but not great HR/RBI. It’s all about your team needs in this instance.

And finally, this one from @redreef21: David Murphy is obviously an everyday starter with Josh Hamilton out. What about when he comes back?

My response: Probably back to status quo unless Nelson Cruz gets hurt or Julio Borbon keeps sucking. Murphy will continue to have a decent role.

By Tim McLeod
This entry was posted on Tuesday, April 26th, 2011 at 2:24 pm and is filed under BASEBALL, Dear RotoRob, Tim McLeod. You can follow any responses to this entry through the RSS 2.0 feed. You can leave a response, or trackback from your own site.