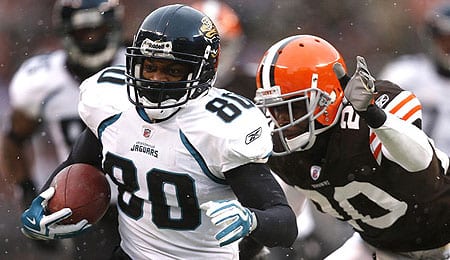 I have guessed wrong on my flex spots the last few weeks. It has almost cost me a spot in the playoffs. I have decent options, but they only seem to produce when I bench them!

I need to pick two of the above in a league that scores 0.5 points per reception.

I warned you about Westbrook — Anthony Dixon is the better play in San Francisco’s backfield and even he’s not very attractive. No way I play Westbrook. None. Same with Thomas. Five games with less than 50 yards receiving in his last six. Now he draws Nnamdi Asomugha? No thanks.

That leaves three for two. With Marion Barber (calf) hurt, Choice would be my *ahem* choice for one of your spots. He’s a solid runner that should get more carries than Felix Jones and could find the end zone. After that, Manningham is probably better than Jackson, mostly because Minnesota’s secondary is not very good. I know Manningham’s numbers haven’t been great, but even if Hakeem Nicks returns he should still get his.

The issue with Jackson is the return of James Starks, who ran 18 times to Jackson’s four last week. Yes, Jackson finished with a respectable 76 yards (three more than Starks) but nearly half of it came on a 37-yard screen pass. The Packers want Starks to get touches against San Francisco and Detroit, two teams they’re clearly better than, so that they know what they’ve got when they close against New England, the Giants and Chicago. So Jackson to the pine.

By Herija Green
This entry was posted on Saturday, December 11th, 2010 at 3:53 pm and is filed under Dear RotoRob, FOOTBALL, Herija Green. You can follow any responses to this entry through the RSS 2.0 feed. You can leave a response, or trackback from your own site.