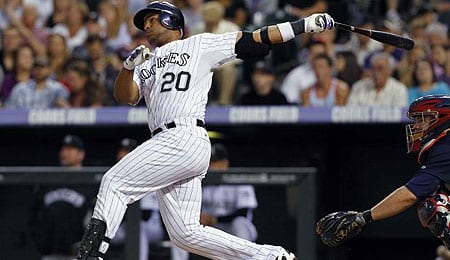 Wilin Rosario has developed into a serious masher.

Welcome to the All-Star break and the unofficial halfway point of the baseball season. We’re going to take this opportunity to review the first half difference makers – players that could have been scooped off the wire who are likely propelling plenty of teams with Fantasy championship aspirations.

Wilin Rosario, Colorado Rockies: Rosario made the Wire Troll on May 20 (for the second time) and he’s been mashing the ball so deep that many believed he would have been a good choice for the Home Run Derby if he had made the All-Star team. The rookie has had a chance to play regularly this year and has rewarded those that scooped him up with his fine extra-base pop. An 800 OPS? With a big second half, Rosario could give Bryce Harper a run for NL ROY honours. It’s worth noting that Ramon Hernandez will be back soon, but Rosario is still widely available in Yahoo! and ESPN leagues, and that’s just crazy.

Adam LaRoche, Washington Nationals: There was some fear that LaRoche may not have been able to start the season on time, but sure enough, he was in the Nats’ Opening Day lineup. Another All-Star snub, LaRoche enjoyed a big first half, which is strange for this typical second-half monster. His extra-base pop has been superb, but he’s also racking up the strikeouts (although that hasn’t stopped him from putting up a decent BA). LaRoche is enjoying a nice OBP and is on pace for a career high in RBI.

Trevor Plouffe, Minnesota Twins: Plouffe gets our nod at the keystone corner by default as there’s not much happening at 2B and he qualifies there in most leagues. His power spike caught our attention in a recent Podcast and earned him plenty of waiver wire love. But can someone tell us why he’s only batting sixth or seventh in the Twins’ lineup? Plouffe’s power breakout has been one of the top stories of the first half and he’s managed to improve his OBP to the point where it’s passable. He heads into the break on a 10-game hitting streak and is poised for a big second half.

Everth Cabrera, San Diego Padres: Jason Bartlett’s injury earned Cabrera a Wire Troll appearance on June 10. In seeing his most action in the bigs since 2010, Cabrera has put up his best ISO ever and is providing owners with plenty of swipes. Don’t look for a big BA from him, but if you need help in stolen bases, he’s a great dude to grab for the second half.

Kyle Seager, Seattle Mariners: Heading into the season, we expected Seager to be a top 35 third baseman, but he’s been close to the top 15 at the hot corner. The former Tar Heel has grabbed hold of the third base gig in Seattle and run with it, improving his extra-base power, but also striking out a bit more. And talk about coming through in the clutch: Seager has 29 of the Mariners’ 113 two-out RBI in the first half.

Mike Trout, Los Angeles Angels: The fact that Trout was owned in 60 per cent of all leagues on Opening Day makes this a bit of a stretch, but his performance since coming back to Anaheim deserves a nod. All he did was lead the majors in hits and steals in June. Just 20 years old, what Trout is doing this year is historic, on pace for a .341 BA with 20 homers, 66 RBI and 43 steals. The improved extra-base pop has been special to see, while the walk rate gains are so impressive from such a young player. In October, he was a feature attraction in the AFL; now, Trout’s a big league star.

Josh Reddick, Oakland Athletics: Back on May 6 when we included Reddick in the Troll, we wondered why he wasn’t getting any Fantasy love. Hell, he’s getting it now based on his superb play since then. Reddick’s heroics helped key a surprisingly good first half by the A’s, who entered the break as a .500 club. After a career year, power-wise, last season, Reddick has made that seem like child’s play with his showing in 2012. Twenty homers, 15 doubles and four triples at the break? Wow. Reddick has been crazy good this year, making the Andrew Bailey trade a serious steal for the A’s.

Norichika Aoki, Milwaukee Brewers: Aoki’s flashed more power than we expected, something we discussed in a recent Podcast. The Japanese rookie has been productive, and although Milwaukee signed him out of Japan last year without really knowing much about him, it has to be pleased with its import. The three-time Japan Central League batting champ is proving he can hit on this side of the Pacific as well, batting .301 at the break.

Lance Lynn, St. Louis Cardinals: Plugged into the rotation to replace Chris Carpenter, Lynn was an early season Wire Troll recommendation, making our list on April 15. Lynn slumped a bit last month, but bounced back to earn his 11th win in his final start before the break. While the rookie’s ERA is up slightly from when he pitched as a spot starter/reliever last year, he’s striking out better than a batter per inning. Small wonder he made the All-Star team.

A.J. Burnett, Pittsburgh Pirates: Back in late-May we said it was time to grab Burnett. Good call… he enters the break on a nine-game winning streak. Burnett missed a couple of weeks in April with a broken orbital bone, yet he’s already reached double digits in wins for the eighth straight season. The improved WHIP, his best since 2007, suggests that Burnett is back. The All-Star snub looks like a great candidate to win NL Comeback Player of the Year.

James McDonald, Pittsburgh Pirates: McDonald earned a Wire Troll shout out on May 6 because of his consistent early season work. He’s since become a must-own Fantasy asset in helping the Pirates morph into legitimate contenders. McDonald has become a workhorse, ranking among the NL leaders in innings pitched, while upping his K rate and reaching the 100-strikeout mark with a 10-K effort in his final start before the break. It’s gotten to the point where he’s become an absolutely vital component to the Pirates’ attempts to win the NL Central this season, and you can bet he’ll be guiding plenty of Fantasy teams to the playoffs as well.

Scott Diamond, Minnesota Twins: Diamond has come out of nowhere this season to really start to make Fantasy headway. Heading into the break, the Canadian has worked at least seven frames in three straight starts, giving up no more than three earned runs in any of them. Diamond won’t rack up many Ks, but he has upped his strikeout rate from last season and his command is massively improved. The new staff ace in Minnesota is going to get 10 days of rest between starts with the break, as the Twins look to keep the 25-year-old fresh in the second half.

Ernesto Frieri, Los Angeles Angels: In late-May Frieri earned a second Wire Troll nod from us and a few weeks later he was considered for the All-Star game in the final voting campaign. As well as he was pitching for the Padres, since getting dealt to the Angels, he’s been scary good with 45 Ks in 26 1/3 IP. Teams simply can’t score against this dude. This seems to be the rare deal that is paying immediate dividends for both clubs as the minor leaguers San Diego got are making progress (including Alexi Amarista, who has worked his way into the big league plans).

Alfredo Aceves, Boston Red Sox: In a Podcast several weeks ago we questioned Aceves’ job security, but he continues to hold the closing gig for Boston. He’s put a rough start in the rear view mirror and has been doing a pretty good job, although his penchant for earning a surprising amount of wins as a reliever is obviously over in his current role. The two losses and one blown save in the week and change leading up to the break were tough to swallow, but the BoSox have shown no signs of impatience with their inexperienced closer.

By Tim McLeod
This entry was posted on Wednesday, July 11th, 2012 at 9:59 am and is filed under BASEBALL, RotoRob, The Wire Troll, Tim McLeod. You can follow any responses to this entry through the RSS 2.0 feed. Responses are currently closed, but you can trackback from your own site.