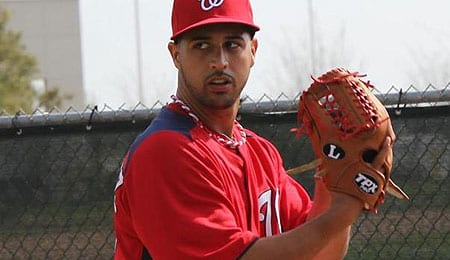 The acquisition of Gio Gonzalez signals that the Nats are going for it.

The 2012 RotoRob MLB Draft Kit surges forward today as Alex checks in with another team preview. So while you wonder how Matt Cain will spend his new found fortune, let’s take a look at the Washington Nationals.

After steadily increasing their win total over the past three seasons (2009 — 59; 2010 – 69; 2011 — 80), the 2012 Washington Nationals are finally in a position to capitalize on a carefully managed rebuilding process. The most compelling evidence that the Nats are positioning themselves to compete for the pennant is the trading of a handful of prospects for the golden left arm of Gio Gonzalez (as a bonus, they acquired the rest of his body as well). This move, along with signing veteran Edwin Jackson, solidifies a better than average rotation that will be paired with an excellent bullpen on the back end. On the offensive side, the Nationals have some pop in their line-up and an emerging poster boy in Bryce Harper.

Heading into Opening Day, the Nationals will have to tinker with their lineup as Michael Morse will start the year on the DL and Adam LaRoche also may not be ready for action. Expect Mark DeRosa and Stephen Lombardozzi to pick up extra at-bats in the early going. Also, LaRoche figures to get a lot of days off throughout the season — even if healthy – so there will be some platooning going on.

SS Ian Desmond: Desmond is a below average shortstop who doesn’t take walks or hit for average. His best asset is speed, and he is expected to swipe around 20 bases.

2B Danny Espinosa: Espinosa is a candidate for 20 homers and 20 steals, but will kill your batting average. If you draft him, you better stock up on average elsewhere.

LF Michael Morse: More is a bona fide slugger looking to match his outstanding numbers from last season. Anything less than 30 homers with a .280 average would be disappointing, but he could always tank this year, leading him to be written off as a fluke.

RF Jayson Werth: The pressure of the big contract should subside since expectations are much lower this season. Werth is a great buy low candidate this season. He is still a top 25 Fantasy outfielder if you can stomach the not-so-great batting average.

1B Adam LaRoche: Don’t rely on LaRoche for much since he is coming off a serious injury and is past his prime. If you can get him dirt cheap in an NL-only league, he may return the value you paid for him – but don’t count on anything.

C Wilson Ramos: A very rosterable catcher in most formats, Ramos coming off a great rookie season and a very scary offseason (the kidnapping in Venezuela). If you are in a two-catcher league, I would recommend grabbing him late.

CF Roger Bernadina: Bernadina is not on the Fantasy radar, but in a pinch he could give you some cheap steals and maybe a few home runs. Also working against him is that has to fight off Rick Ankiel and eventually Harper for playing time.

OF Rick Ankiel: Ankiel is not much more than a Fantasy flier as Harper could be in the big leagues by the middle of summer. Ankiel probably splits time with Bernadina until then, but he’ll start the season on the DL.

2B/OF Steve Lombardozzi: Lombardozzi has been working on playing the outfield this spring, which tells us he will make the team and will see some at-bats. He’s a great deep NL-only buy for $1, as he can fill in at multiple positions. With his decent BA and a little speed, Lombardozzi can easily perform to his draft value.

1B/3B/OF Mark DeRosa: Even at the age of 37, DeRosa can contribute and we expect at least 200 at-bats for him this year. If injuries hit, he could be in line for substantial playing time.

Stephen Strasburg: The most valuable Fantasy commodity on the Nats is Strasburg, with the only concern being a possible innings cap. Look for at least 10-to-13 wins, a sub-3.00 ERA, a WHIP around 1.00, and a high strikeout rate. It will be interesting to see if the Nats stick to an innings cap (like they did with Jordan Zimmermann), especially if they make a run at the postseason.

Gio Gonzalez: On the position side of the ledger for Gonzalez, moving to the National League should help him reach 200 strikeouts for the first time. On the down side, he moves from a better pitcher’s park in Oakland and still carries a high walk rate which can put a hurting on your WHIP. Overall, Gonzalez is worth the risk and should win double digit games and carry an ERA in the mid-3s.

Jordan Zimmermann: Coming off Tommy John surgery, Zimmermann was very impressive and is cemented into the middle of the rotation. The youngster may be a little undervalued in drafts this season as he should hover around the low 3s in ERA with a solid WHIP. The downside is that Zimmermann is not a great strikeout pitcher, but that could improve as he regains his pre-surgery command.

Edwin Jackson: Jackson looks great on the surface, but if you delve into his numbers, he puts a lot of men on base, has a low strikeout rate, and is a good bet for a 4.00+ ERA. He has a no-hitter on his resume, but he won’t be consistent. If you plan to use Jackson, playing the match-up game is probably the best course of action.

John Lannan: Lannan spent much of Spring Training on the trading block, but since Chien-Ming Wang is out for a while with an injury, the fifth spot goes to the healthy party. Performance will dictate whether Lannan holds onto the job, with Wang in the wings upon return. I would not touch either in a shallow Fantasy league but Lannan could have some value in NL-only formats if you grab him for a buck.

Drew Storen: Storen is easily a top five closer who should crack 40 saves this year while getting you at least a strikeout per inning. Note that he’ll begin the season on the DL, but should be good to go by mid-April.

Tyler Clippard: If you are in a holds league, grab Clippard. He has no shot at closing long-term unless Storen’s injury worsens, but Clippard is as good as it gets in the eighth.

Ross Detwiler: Former starter Detwiler has been relegated to long relief duty in the bullpen.

Ryan Zimmerman: With Morse coming off a season that will be difficult to duplicate, it is hard to stamp the stud label on the unproven slugger (especially since he’ll start the year on the DL). On the other hand, Zimmerman is coming off a down year so he is sort of under the radar this spring. He should be able to easily out perform his draft position, providing you with a nice return.

Bryce Harper: Harper is the top prospect who seems to be a sure thing. But not so fast – it’s not going to happen, at least not this year. Realistic expectations for Harper this year are 250 at-bats, 10 homers, 40 RBI, 10 steals, and a .260 batting average. How much is that really worth? Skip buying Harper in 2012 and grab him in 2013 when he should really make an impact.

Jordan Zimmermann: With the offseason acquisition of Gonzalez, Zimmermann becomes even more of a sleeper as he is hidden in the three spot in the rotation. While Strasburg may have the best numbers on the mound, Zimmermann can be had at a much lower cost and has all the tools to turn in an All-Star type season.

By Alex Hardin
This entry was posted on Tuesday, April 3rd, 2012 at 5:22 pm and is filed under 2012 RotoRob MLB Draft Kit, Alex Hardin, BASEBALL, Team report. You can follow any responses to this entry through the RSS 2.0 feed. Both comments and pings are currently closed.