The Wire Troll: The Early Bird Gets the Prospect 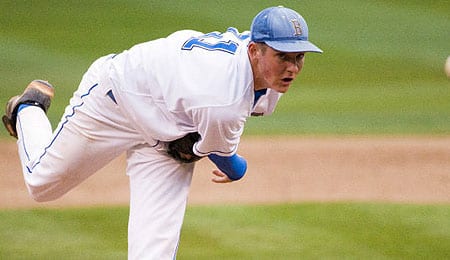 If former UCLA star Trevor Bauer is unowned in your league, do something about it.

This weekend is the start of the second phase of Interleague play. For the Fantasy owner, it can be a challenging affair that tends to turn our day-to-day world upside down as we attempt to set and maintain rosters in our leagues. That being said, Albert Pujols with third base eligibility is an interesting concept heading into the second half of 2012.

In this installment of The Wire Troll, we’re going to take a look at some of the elite prospects that are knocking on the door. Their time is not that far off and a pre-emptive strike can make a big difference and end up being money in the bank. You can jump in early for a reasonable price or pay the piper when that promotion eventually does occur. We’ll always strive for Option “A.”

Trevor Bauer, SP, Arizona Diamondbacks (CBS: 64 per cent owned, ESPN: 4 per cent owned): There is a reason that Bauer is owned in 64 per cent of CBS leagues. His combined record in the minors this year (10-1) is mind boggling. He’s the proud owner of a 1.79 ERA with 102 strikeouts in 80 1/3 IP. Bauer made the move from Double-A to Triple-A in mid-May and hasn’t skipped a beat. He is arguably the top pitching prospect in the game and his next and final move will be into the D-back’s rotation. How long can Wade Miley hold off the hard charging Bauer? Or will it be the struggling Daniel Hudson who loses his rotation spot?

Danny Hultzen, SP, Seattle Mariners (CBS: 18 per cent owned, ESPN: unowned): Hultzen went into Spring Training battling for the fifth starter’s gig and ended up at Double-A Jackson (along with Taijuan Walker and James Paxton, who both bear watching as well). Hultzen is sporting a 7-3 record after Friday’s eight-inning, two-hit gem and 70 1/3 IP overall, he’s allowed 34 hits and 31 walks while striking out 75. There’s been no talk about a callup yet, but if he keeps pitching at this level he’ll force the Mariners’ hand and it will be sooner rather than later.

Jedd Gyorko, 2B/3B, San Diego Padres (CBS: 5 per cent owned, ESPN: unowned): The 23-year-old middle infielder is a huge favourite of our fearful leader RotoRob and his pet hedgehog Prickles and I’d be in serious trouble if I didn’t make mention of his recent success. Gyorko got off to a solid start at Double-A, but has really taken his game to a higher level and turned on the jets after his promotion to Triple-A. In his past 10 games at Tucson, he’s gone 18-for-41 (good for an off-the-charts .439 BA), smacked four homers with 14 RBI, and is the proud owner of a 1329 OPS. Gyorko’s current stumbling block to a full-time gig with the Padres is a combination of Logan Forsythe and Alexi Amarista. The odds are very good that the Padres will be giving Gyorko a call in the very near future.

Wil Myers, OF, Kansas City Royals (CBS: 23 per cent owned, ESPN: unowned): The converted catcher got off to a great start at Double-A and since moving to Triple-A hasn’t skipped a beat. In the past 10 games, Myers has belted five homers and driven in 15 runs. On the year, he’s mashed 21 homers, driven in 53 runs, and has an outstanding .336 BA in 222 at-bats. The 21-year-old looks to be more than ready for his first audition in the Royals’ outfield.

Michael Saunders, OF, Seattle Mariners (CBS: 32 per cent owned, ESPN: 32 per cent): Switching gears to players that are currently in the bigs, Saunders has been simply outstanding the past couple of weeks. In his past 10 games, he’s managed to go 20-for-43 at the dish with two homers, five RBI, nine runs scored and two thefts. Get Saunders rostered and active in all formats to take advantage of this current hot streak.

Salvador Perez, C, Kansas City Royals (CBS: 18 per cent owned, ESPN: 1 per cent): Perez is now 7-for-12 in his rehab stint and is on the cusp of a return to the full-time catcher role for the Royals. His great debut last summer shouldn’t be forgotten.

Alex Presley, OF, Pittsburgh Pirates (CBS: 10 per cent owned, ESPN: 2 per cent): After a demotion to the minors, Presley is back with the Pirates, and back in the leadoff slot. In his first five games since being recalled, he’s homered, scored four runs and swiped a couple of bases. The horrible slump that got Presley farmed out is water under the bridge and hitting in front of Andrew McCutchen won’t hurt his chances of piling up runs.

Trevor Plouffe, SS/3B/OF, Minnesota Twins (CBS: 11 per cent owned, ESPN: 2 per cent owned): Plouffe is not hitting for average but has smacked four homers in the past seven games, giving him nine on the season. Toss in multi-position eligibility and Plouffe has value in deeper formats.

Ryan Cook, RP, Oakland Athletics (CBS: 11 per cent owned, ESPN: 3 per cent): Manager Bob Melvin stated that the A’s are going with a closer-by-committee moving forward. Brian Fuentes and Grant Balfour have both had the job and lost it after struggling. We’re betting on Cook getting the next crack at the ninth inning gig.

Everth Cabrera, SS, San Diego (CBS: 9 per cent owned, ESPN: 1 per cent): Jason Bartlett will not be returning until at least mid-July and it’s possibly he may have played his final game in San Diego. Cabrera has a little bit of pop, a lot of speed, and a full-time gig.

Joe Kelly, SP, St. Louis Cardinals (CBS: 1 per cent owned, ESPN: unowned): Jaime Garcia is out for at least the next six weeks and Kelly will get first shot at filling the hole in the Cards rotation. The 2009 third rounder, who was identified by RotoRob way back in late-April as someone to watch, has enjoyed a solid campaign at Triple-A Memphis (2.93 ERA in 12 starts) and should be on the radar in deeper leagues.

Mike Fontenot, SS, Philadelphia Phillies (CBS/ESPN: unowned): Chase Utley and Freddy Galvis are a long way from returning (if in fact they do) with Fontenot the favourite to see regular at-bats in the interim.

Brandon Moss, OF, Oakland Athletics (CBS: 1 per cent owned, ESPN: unowned): Kila Ka’aihue, Deric Barton, Brandon Allen and Pink Floyd knows who else have failed. It’s time to give Moss a kick at the can. He mashed 15 homers at Triple-A Sacramento but is 28 and has failed in several opportunities to stick over the years, so temper your expectations.

Daisuke Matsuzaka, SP, Boston Red Sox (CBS: 20 per cent owned, ESPN: 4 per cent): In his return from Tommy John surgery, Dice-K had a decent season debut Saturday against the Nats. He’s allowing a few too many long-balls, but keeping the walks — a huge problem in the past — under control.

Chris Iannetta, C, Los Angeles Angels (CBS: 15 per cent owned, ESPN: 1 per cent): Iannetta could be back with the Halos as early as next weekend and should be owned in all two-catcher formats.

By Tim McLeod
This entry was posted on Sunday, June 10th, 2012 at 2:38 pm and is filed under BASEBALL, The Wire Troll, Tim McLeod. You can follow any responses to this entry through the RSS 2.0 feed. Both comments and pings are currently closed.