The Wire Troll: The Return of Johnny Damon 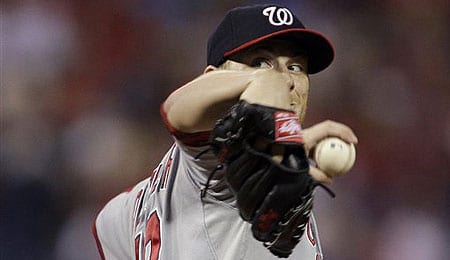 Ross Detwiler is rewarding Washington’s faith in him.

Friday the 13th was not a good day for Fantasy baseball owners. The devastating news — especially in AL-only leagues — broke that Jacoby Ellsbury will be lost to the Red Sox for a minimum of 6-to-8 weeks with a subluxed right shoulder, suffered in a collision at second base with Reid Brignac of the Rays.

On the west coast the news wasn’t any better on this cursed day. An MRI on Brian Wilson’s ailing right elbow revealed structural damage and a trip to visit Dr. Andrews is in the offing. This clearly isn’t a shock as Wilson has had elbow problems since the later part of 2011, but nonetheless this could create a rather large void in the Giants pen. Replacing both Ellsbury and Wilson will be a tough chore but hopefully this week’s Troll can provide some solutions.

Now let’s take a look at this week’s recommendations.

Danny Duffy, SP, Kansas City Royals (CBS: 35 per cent owned, ESPN: 2 per cent): The 23-year-old southpaw suffered through an up-and down campaign last year, but in his 2012 debut he flashed the form that had prospect hounds drooling. In six innings of shutout ball, Duffy one-hit the Athletics while chipping in eight strikeouts. He faces two of the top pitchers in the game this week at home in Justin Verlander and Ricky Romero but with his ownership levels more than doubling in the past week, it’s now or never time to take the plunge if you want Duffy on your team this year.

Joe Wieland, SP, San Diego Padres (CBS: 6 per cent owned, ESPN: unowned): Take Matt Kemp out of the equation and Wieland had a solid debut Saturday. Four of the six earned runs he allowed were as a result of two swings by the hottest player in the game. The 22-year-old righthander was acquired (along with Robbie Erlin) from the Texas Rangers in the Mike Adams deal last summer and enjoyed a great 2011 campaign down on the farm. Wieland posted a 13-4 record to go along with a stellar 1.97 ERA and 150 strikeouts in 155 2/3 IP. He should get at least another couple of starts to display his solid skill set as the Padres attempt to deal with the injury bug that has cost them both Tim Stauffer and Dustin Moseley.

Ross Detwiler, SP, Washington Nationals (CBS: 12 per cent owned, ESPN: 1 per cent): In a rather surprising move, the Nationals named Detwiler as their fifth starter and demoted 2011 Opening Day starter John Lannan to Triple-A Syracuse. Detwiler rewarded the Nats by tossing five strong innings of two-hit, six strikeout shutout ball against the Mets. Performances like that will be keep the disgruntled Lannan in Triple-A Syracuse (at least until the Nats back off their stance and trade him to a team that can use him).

Randall Delgado, SP, Atlanta Braves (CBS: 19 per cent owned, ESPN: 1 per cent): After a horrible spring in which he struggled to find the form he demonstrated down the stretch in 2011, Delgado stepped it up in his season debut. In five innings, he held Houston to two earned runs while allowing five hits and two walks and striking out six. Degaldo is looking at a two-start week coming up (against the Mets and Diamondbacks) and is an intriguing option in both H2H and and NL-only formats.

Lance Lynn, SP, St. Louis Cardinals (CBS: 48 per cent owned, ESPN: 15 per cent): Plucked from the depths of St. Louis’ middle-relief corps to replace Chris Carpenter, Lynn has to be considered one of the biggest early season pitching surprises. His second outing — while still solid — wasn’t quite as impressive as his season debut when he totally dominated Milwaukee. In 5 1/3 IP against the Cubbies, Lynn allowed four hits, two walks and one earned run while fanning five to bag his second win of the young season. Carpenter is nowhere near returning (we could be looking at the All-Star break at this point), so Lynn should continue to provide great value in what could be a rather lengthy stay in the Cardinals’ rotation.

Sergio Romo, RP, San Francisco Giants (CBS: 25 per cent, ESPN: 5 per cent): The news about Wilson’s elbow is going to generate another huge wave of FAAB spending this weekend. San Francisco Manager Bruce Bochy seems to be leaning towards a closer-by-committee approach to replace Wilson, but our first choice has to be Romo. He’s coming off a great 2011 season in which he posted a stellar 1.50 ERA and 0.71 WHIP to go along with 70 strikeouts in 48 IP. At some point in time Santiago Casilla, Javier Lopez, and Jeremy Affeldt could all work their way into the mix for saves but we’re hanging our hat and FAAB dollars on Romo getting the first shot at closing out games for the Giants.

Johnny Damon, DH, Cleveland Indians (CBS: 11 per cent owned, ESPN: 1 per cent owned): On Friday, Damon was signed to an incentive laden one-year by Cleveland where he’ll continue his chase of 3,000 hits. Last year in Tampa Bay, he hit .261 BA with 16 homers, 73 RBI, and 19 thefts in 582 at-bats. He should be ready to roll in about a week or so and should be on the strong side of a platoon with Shelley Duncan in left field. Damon is no Ellsbury, but could help soften the blow over the next couple of months.

Juan Rivera, 1B/OF, Los Angeles Dodgers (CBS: 23 per cent owned, ESPN: 20 per cent): After Rivera struggled in Toronto, the Dodgers gambled and acquired him in mid-July and he rewarded the Blue Crew handsomely with 42 RBI in August and September. He’s off to a solid start and batting in the company of the hot-hitting Kemp and Andre Ethier should provide solid RBI opportunities, so consider Rivera in deeper mixed formats.

Wei-Yin Chen, SP, Baltimore Orioles (CBS: 24 per cent owned, ESPN: 1 per cent owned): It’s a tough gig in the AL East but Chen acquitted himself rather well in his debut against the Yankees.

Mike Adams, RP, Texas Rangers (CBS: 23 per cent owned, ESPN: 9 per cent): Joe Nathan has looked far from stellar so far and Adams has already notched his first save (albeit in a game that Nathan wasn’t available after pitching the previous two games).

Jarrod Dyson, OF, Kansas City Royals (CBS: 1 per cent owned, ESPN, unowned): Speed, speed, and more speed — as long as he can get on base, that is.

Matt Carpenter, 3B, St. Louis Cardinals (CBS: 1 per cent owned, ESPN: unowned): If I were a Carpenter, and you owned a Berkman, would you roster me anyways?

By Tim McLeod
This entry was posted on Sunday, April 15th, 2012 at 12:23 pm and is filed under BASEBALL, The Wire Troll, Tim McLeod. You can follow any responses to this entry through the RSS 2.0 feed. Both comments and pings are currently closed.