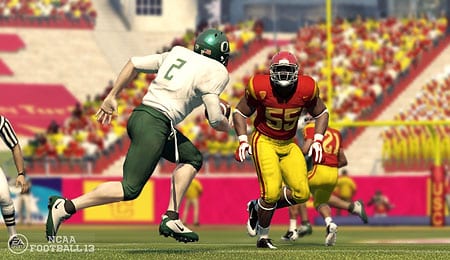 Although in many ways it seems impossible, the calendar confirms that the start of another football season is mere weeks away. And as such, it’s time for EA Sports to trot out its latest iteration of collegiate pigskin with NCAA Football ’13. The game is once again content to make mostly subtle improvements over last year, though the new Heisman Challenge does bring one completely new feature to the series: real-life players.

Base controls remain consistent with previous releases, but this version does feature some nice tweaks in the passing game. The most welcome is total control passing, which allows you to lead your receivers to open spaces in coverage. Under that same banner is improved ball trajectory so passes can be elevated over the linebackers and dropped down to receivers on the other side. It’s much more realistic that you don’t have to wait for an absolutely clear throwing lane lest an opposing linebacker vaults straight up and picks off the pass. Receivers aren’t instantly anticipating throws this year, either, which is smartly represented by the icon over their heads not lighting up until they’re ready.

Another long overdue addition is the ability to cancel out of the play-action animation when you see the computer is having none of it and is about to bury you if you carry out the fake. Simply pressing the right trigger sets you up to throw immediately… now, this doesn’t necessarily mean you’ll be able to avoid the rush, but it beats the alternative of having no chance.

Those playing the Road to Glory or Heisman modes will also notice a new item: reaction time. This allows you to actually slow time with the pull of the left trigger to make precise moves or wait that extra second for a receiver to come open. If it sounds a bit overpowered, note that it operates as a refillable meter so it can’t be spammed on every play.

Visually, you’ll be hard pressed to distinguish this year’s version from NCAA Football ’12, and you’ve got to wonder if the current graphics engine is maxed out at this point. The new dropback and throwing animations are appreciated, and most of the collisions seem solid, though there are times when players will clip through one another or body parts will appear submerged in the grass. It still looks good, though some of the luster that accompanied the NCAA ’11 makeover has faded.

One new feature is the studio updates, voiced by ESPN’s Rece Davis. They’re pretty cool initially as the commentary team throws it to Davis for score updates from around college football. They don’t wear all that well, though, as you start to hear lines repeat frequently. I really like the premise of providing a sense that your dynasty isn’t taking place completely independent of everything else, but it still has some kinks to iron out.

Beyond the updates, commentary has a very familiar feel with Brad Nessler, Kirk Herbstreit and Erin Andrews calling the action. This is an area I’ve harped on in years past, and nothing here makes me feel like any meaningful strides have been made. The rest of the package — fight songs, ambient crowd noise, hits, etc. — remains solid.

Most of the notable gameplay changes have already been covered in the controls section as the refined passing game takes top billing. It does make a difference, particularly the total control passing, though one could argue it makes you a little too effective against the computer as defensive backs seem to get toasted with great frequency. The pass rush feels a bit more realistic this year as well with blitzes actually generating notable pressure when dialed up. Still, if you played either of the past two years you pretty much know what you’re getting, albeit with some minor refinements.

Road to Glory (RTG), the game’s player-centric mode that allows you to play out an individual career starting with your senior year in high school, got an overhaul last year and has seen additional tweaks this year as well. Undoubtedly the most appreciated is that the play calling is much more aggressive and focuses on your position. Whereas last year you might be called upon to hand off 60 per cent of the time, this year the computer puts the ball in your hands.

That being said, it tends to do it in unrealistic ways. No matter where you go you’re going to get the ball — even if you’re a running back in an “Air Raid” offense you’ll still get 20-plus carries. As a quarterback you’ll be slinging the ball all over the field up 28 points in the third quarter, though the game will at least pull you in the fourth. It’s more enjoyable than last year, but there’s still a balancing act to be done to create ample opportunities to produce while maintaining realistic game flow.

Player progression remains the same as you still accumulate experience by making plays, which also builds up your coach trust. The more the coach trusts you, the more job security you have and the more you can influence the play calling. As for the experience, those points are used to purchase random upgrade packages to improve your player’s skills. It’s a fine system, and the various difficulty settings allow you to make the journey easier or harder based on your preference.

New to NCAA Football ’13 is the Heisman Challenge, which tasks you with capturing the prestigious trophy with a number of former winners like Barry Sanders, Robert Griffin III and Desmond Howard. When I first heard about the mode I thought it might be reminiscent of the “Jordan Challenge” of NBA 2k fame where you went back and tried to duplicate the accomplishment with historical teams and players. That is not the case here.

The only licensed players are the Heisman Trophy winners, and it’s basically a one-year RTG where a historical player is placed into the current football landscape. In fact, you’re not even obligated to play for their alma mater. So, if you want to put Doug Flutie on USC or Sanders on Nebraska there’s nothing stopping you. It has its allure if you grew up watching these guys perform on Saturdays, but from a nostalgia perspective it could’ve done more… after all, what’s more fun: seeing Flutie try to earn a spot in the BCS or going head-to-head with Bernie Kosar at the Orange Bowl?

Rounding out the offerings is Dynasty Mode, which once again puts you at the helm of your favourite collegiate program and challenges you to build them into a national power (or maintain if you take over a perennial championship contender). However, while the goal remains the same, the mode has seen some tweaking to the all important scouting and recruiting mechanics.

Of those changes, the most interesting is the implementation of dynamic pitches, as selling points such as conference prestige and television exposure will fluctuate rather than remaining stagnant. This helps programs on the rise by rewarding their improvement with additional recruiting clout. Player interest in schools seems to change more than in the past as well — to the point that it actually feels like you can successfully recruit someone that doesn’t begin with a strong interest in your program.

For those curious, as of now the ability to implement the four-team playoff (set to replace the current BCS formula in 2014) is not available.

There’s an easily identifiable theme with NCAA Football ’13, that being one of small improvements over last season. The passing game changes make the core gameplay better, just as the recruiting tweaks make dynasty a stronger mode. So, while I wouldn’t classify this as a must buy for owners of last year’s game, those that elect to make the investment shouldn’t be disappointed.

By Herija Green
This entry was posted on Tuesday, July 10th, 2012 at 12:24 pm and is filed under FOOTBALL, Herija Green, Video Game Reviews. You can follow any responses to this entry through the RSS 2.0 feed. Both comments and pings are currently closed.