Is Hunter Pence a Bust? 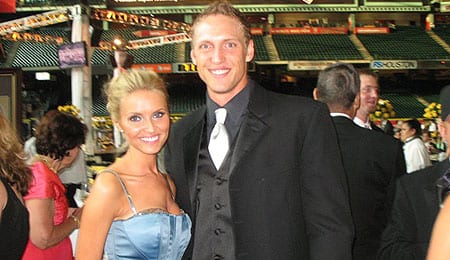 Hunter Pence hasn’t excelled like that last year, but he still gets the hotties.

We sure hope you listened to us before the season when we suggested that Philadelphia Phillies outfielder Hunter Pence would be a bust this year.

It’s not as if he’s been a disaster… after all, he is on pace for his first 30-homer season.

The other big issue we had with Pence was that his running game seemed to go AWOL once he was dealt to Philly. After regularly putting up mid-teen steals in Houston, Pence has managed just five swipes in 140 games with the Phillies.

He didn’t exactly enter the break hot, going just 3-for-14 over the final four games with two runs and one RBI. In fact, July has seen Pence go ice cold after solid months of May and June followed a sluggish start.

The good news is he’s stayed healthy and is on pace for a career high in at-bats and you have to like the fact that lots of his doubles have become homers. And while he hasn’t been quite as productive as last year when he set a career high in narrowly missing his first 100-RBI campaign, he’s been pretty darned close despite a weaker BA and a putrid .226 mark with runners in scoring position.

We also like the fact that Pence is striking out less often this season.

So by no means are we suggesting that Pence has been a stiff this year. He obviously remains a must-own Fantasy outfielder, but those of you that thought he had taken another step with his arrival in Philly have been sadly disappointing. Just don’t say we didn’t warn you.

Now the question remains, what does the future hold for Pence?

With Philly’s free fall continuing – despite the return of Chase Utley and Ryan Howard and the pending return of Roy Halladay – it is becoming clear the Phillies will be selling at the break.

That will likely spell the end of Pence’s short-lived career in the City of Brotherly Love.

Pence is signed through the end of next season, but whether Philly wants to retain him long-term is unclear, so don’t be shocked if he’s in a new uniform by next month.

By RotoRob
This entry was posted on Thursday, July 12th, 2012 at 12:04 pm and is filed under BASEBALL, Busts, RotoRob. You can follow any responses to this entry through the RSS 2.0 feed. Responses are currently closed, but you can trackback from your own site.