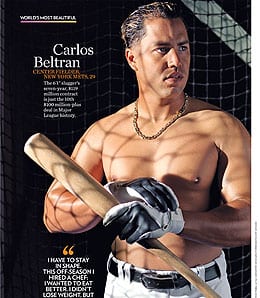 Carlos Beltran, one of People’s most beautiful people, is now a Giant.

After several weeks dealing with vacations and work related travel plans we finally managed to have the whole gang in attendance Sunday. Rich Wilson, Tony Cincotta, and I got together on the FantasyPros911 show on Blogtalkradio with the topic of the day being the many moves leading up to the non-waiver trade deadline. It what was an incredibly busy week in the world of baseball and, in trying to stay on top of all the news, we ran a full 20 minutes over our time allotment. There is a reason for my secret stash of gummy bears, folks.

First up was the Carlos Beltran trade, when the Mets sent him to the Giants for young phenom Zack Wheeler. The Giants gave up a lot in Wheeler, but needed the offense that rental player Beltran brings to the table if they are going to have a shot at repeating as World Series champs.

For the first time in many years, both the Pirates and the Indians took steps to upgrade their squads at the deadline. Cleveland made perhaps the biggest move acquiring Ubaldo Jimenez from the Rockies for a package that included two top prospects Drew Pomeranz and Alex White. Barring a miracle, there will be no magical stretch run in Colorado this year. The Indians also picked up Kosuke Fukudome from the Cubs in an attempt to increase their outfield depth. Pittsburgh acquired Derrek Lee, who offers a marginal upgrade over incumbent Lyle Overbay at first base, and also added Ryan Ludwick for a PTBNL. Both should prove to be solid acquisitions as the Pirates try to hang in near the top of a very competitive NL Central.

The rich got richer when the Phillies acquired Hunter Pence from the Astros for a package that included top prospects Jarred Cosart and Jon Singleton. The Astros weren’t finished as they also moved Michael Bourn to the Braves for a package of minor leaguers. Houston needed to rebuild its farm system and that process is now well underway, but in the interim the ‘Stros everyday lineup is going to be rather unrecognizable (not that it was peppered with big names to begin with).

The St. Louis Cardinals were the big movers in the NL Central, acquiring Edwin Jackson to boost the rotation and Rafael Furcal to improve their infield defense and provide a spark at the top of the lineup. In a very tight division, are these moves enough to hold off the Brewers, Pirates, and Reds? These transactions did come with a price as the butting-of-heads between Manager Tony LaRussa and Colby Rasmus finally came to a conclusion with the talented youngster being shipped to the Jays. Toronto has assembled a very solid young outfield that could prove to be a strength for many years.

Boston went out and grabbed Mike Aviles for infield insurance and, in what could be a very prudent move, also added starting pitcher Erik Bedard from the Mariners. This acquisition could prove to be crucial in Boston’s playoff aspirations with the news that Clay Buchholz is likely done for the season with a stress fracture in his back.

The Rangers made two very significant moves in addressing one of their few weak spots, acquiring Mike Adams from the Padres for two young arms in Robbie Erlin and Joe Wieland. Oriole reliever Koji Uehara was next on the Rangers’ shopping list, costing Texas Chris Davis and Tommy Hunter. Very quickly the Rangers turned an area of weakness into one of strength. Texas has built a very solid farm system over the past several years and converted some of that strength into the pieces it felt would be needed for a return trip to the World Series.

Wrapping things up we took a few minutes to look at who got the job done and who didn’t. There were some notable teams absent from madness last week, with the Yankees at the top of the list. When was the last time New York didn’t make a move of some sort at the deadline?

A fun time was had by all and the full show can be heard by clicking on the play button below.

By Tim McLeod
Tags: Carlos Beltran, New York Mets, San Francisco Giants
This entry was posted on Monday, August 1st, 2011 at 12:48 pm and is filed under BASEBALL, Podcast, Tim McLeod. You can follow any responses to this entry through the RSS 2.0 feed. Both comments and pings are currently closed.