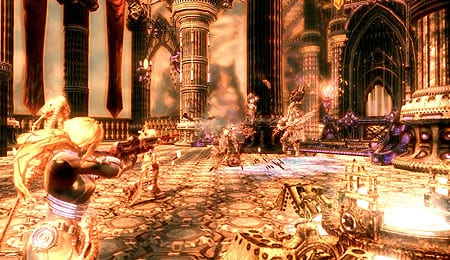 With time doppelgangers, the answer is “Yes, I do have to do everything myself.”

People have always pondered the question, “What would you do if you could travel through time?” The answers are usually variations on one of two choices; prevent a horrible incident from happening and/or change things for the better. But in reality, everyone just wants to buy a sports almanac, then go back in time and make surefire bets to get filthy rich. The good folks at Konami and Gaijin Entertainment provide an alternative answer in the action adventure, Blades of Time. That alternative on time control is to rip some nasty beasts a new one on Xbox 360 or PlayStation 3. And maybe get rich in the process.

Blades of Time features a fierce pigtailed, semi-Lara Croft-ian treasure hunter named Ayumi who wields destruction a-plenty by wildly flailing two giant swords and a big ass rifle. She can dish out damage by simply tapping attack, occasionally using a kick attack to launch air combos and pressing the right bumper to counter attack and execute finishing moves. Powerful magic spells can easily be implemented into combo streams, granted you have enough chi from fallen enemies. She can also whip out her rifle or heavy machine gun with a press of the right stick for over-the-shoulder gunplay.

Pressing the right trigger acts as a dash for evading attacks, but it eventually can be powered up as an offensive move. The dash also comes in handy during bits of platforming as it allows Ayumi to cling on exotic corals and swish from one to the other. Rounding out her abilities is the Time Rewind, which plays back your previous actions; thus creating a doppelganger. This allows you to tag-team enemies with your shadow self for double damage (or triple, if used correctly) and is also handy for switch-operating puzzle solving.

Blades of Times may lack complex move lists found in similar action titles, but it gets by with its simplicity combined with Ayumi’s ability to rewind time. Further progression is rewarded with new abilities and perks that are mostly automatic and require minimal menu maintenance. Wielding the powers of fire and ice on the fly without weapon selection is smooth, but it does render a few abilities useless. I seldom used the kick or slide attack, and I wish the gunplay was implemented more often.

Ditching the faux anime look of its predecessor X-Blades, Blades of Times aims for a slightly more serious and realistic approach. Well, it’s as serious and realistic as a game with a scantily-clad blonde woman in pigtails trapped on a cursed fantasy island can get. There’s some good model work throughout the entire adventure in the characters, enemies, and in particular the architecture of the environments. A fair amount of detail and no shortage of variety in locals and baddies keep things interesting as does the decent voice acting and sweeping epic-style score. The presentation doesn’t fully shine, though. There’s a good deal of polygonal clipping and frame rate issues throughout, and the story scenarios are poorly animated.

Having completed this game beginning to end, I’m not sure what exactly is going on. There are treasure hunters locked in a cursed realm, beasts of Chaos, guardians of the sky and an orb that does something or another. Jumbled narrative aside, something compelled me to press onward. There’s always plenty of action that focuses on Ayumi’s Time Rewind ability, which is the best part of the game.

There are some sweet tactics to overwhelm your enemies with — whether it be wailing on them while your double has them in a grapple or multiplying your firearms to disable shielded foes. The boss encounters are also pretty good at having you utilize your techniques creatively on top of puzzles involving door switches and platforming. You might not see the method to the madness right away, but generous fast loading checkpoints will help see your way through easily.

The full campaign runs for about six to 10 hours, depending on how much time you spend searching for scattered notes that flesh out the back story and alters that reward you with your choice of new abilities. After tearing through, there isn’t a whole lot of incentive to revisit this quest, but a base defense/horde mode called Outbreak offers some potential extended gameplay.

It can be played alone, multiplayer co-op or competitive online, and the goal here is to fight alongside NPCs to protect your team’s magic trees while attacking theirs as swarms of regenerating enemies give reason to beat ass, sans your time rewind. Loaded with unlockable perks, additional characters and a mode-specific leveling system, Outbreak is a decent pack-on. Even still, the thrills can run out pretty quick after you’ve encountered and defeated enemy types, and the repetitiveness is unlikely to bring you back for repeat plays.

Blades of Time can be time well spent as a rental for fans of hack ‘n slash titles like God of War or the modern Prince of Persia series. It doesn’t have the complexity, story or scope of bigger triple-A titles, but it utilizes time control in nifty ways, creating a charm of its own.

By Jess Castro
This entry was posted on Sunday, March 25th, 2012 at 2:03 pm and is filed under Jess Castro, Video Game Reviews. You can follow any responses to this entry through the RSS 2.0 feed. Responses are currently closed, but you can trackback from your own site.