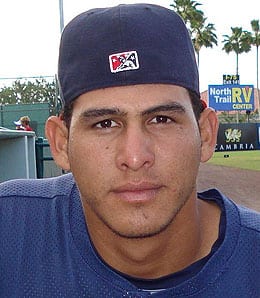 Wilson Ramos could be a real factor for the Nats at some point this year.

The 2011 RotoRob MLB Draft Kit continues today with a look at our picks for the top prospects in the game. In this, our seventh annual list, we’ve again beefed things up this year – going 50 deep for the first time. In fact, it’s so big this year that we’ve had to break it up into multiple parts to make it more digestible. Mmmmm…digestible. At any rate, today we kick it off with prospects 50 through 41. So while you keeper league owners or those that have already drafted Adam Wainwright try to figure out how to overcome such a debilitating loss, why not take your mind off things by exploring the best prospects in the game. Maybe the next Wainwright can be found on this list.

This season, there are only 16 players that return from our 2010 rankings, mostly because a whopping 21 of last year’s Top 45 prospects have graduated to the bigs. Also attributing to the small number of returnees is a larger number of players than usual – eight in total – that dropped off the list this season. That means there are a whopping 34 newcomers to the list this season – by far the most ever (only partially explained by our increase from a top 45 to a top 50 list). So if you like newbies, you’ve come to the right place.

Now go get yourself a java and then sit down to enjoy Part I of our tome of prospects.

50. Wilson Ramos, C, Washington Nationals (NR): We think enough of Ramos’s prospects this year to have included him in our 2011 catcher rankings. This is one of several kids that we think more highly of than some others, but I like what he’s already shown in the majors, albeit in very limited action. This 23-year-old Venezuelan came into last year as one of the best prospects in the Twins’ organization and a move to Washington – and away from Joe Mauer – only increases his chances. He has proven he has both the bat and the glove to be an effective major league catcher – all that’s missing now is an opportunity, Once the Nats clue in that Ivan Rodriguez is not part of their long-term turnaround, you can expect Ramos get plenty of PT. In fact, he’s likely a pretty good second-sleeper to consider. While Ramos had his issues at Triple-A Rochester, he really started to turn it on after getting dealt to Washington, and wound up recording an impressive 835 OPS in 20 games with Syracuse, the Nats’ Triple-A affiliate. This kid just hasn’t been hyped much, which is actually a good thing if you’re seeking someone that you can sneak by the rest of your league.

49. Zack Cox, 3B, St. Louis Cardinals (NR): Blessed with tremendous bat speed, Cox projects as a high average, respectable power third baseman. Defense may force a shift to second base, but Cox’s bat is good enough to drive him to the majors regardless. The Cards’ first rounder (25th overall) in 2010 played just four games after signing last year, so there’s very little regular season professional data to go on, but for what it’s worth, he enjoyed a decent AFL. This former All-American is probably two years away, but keeper league owners need to roster him now.

48. Jean Segura, 2B Los Angeles Angels (NR): Segura is a Raul Mondesi-type – at second base. He’s an excellent contact hitter that will soon force the underwhelming Howie Kendrick to look over his shoulder. Injuries cut into Segura’s development in 2008 and 2009, but last year – in his first taste of full-season ball – he made nice strides at Class-A, flashing decent extra-base power, tremendous speed, developing patience and high average skills. In 184 career minor league games, Segura is a .320 hitter. He’ll turn 21 next month, so he needs to advance quicker this season; if he’s at Double-A by the end of the season, Segura will on track, and should start being taken more seriously as a top prospect.

47. Drew Pomeranz, SP, Cleveland Indians (NR): Pomeranz is another prospect we seem a bit higher on than some. But this southpaw was an absolute stud at Ole Miss before the Indians tabbed him with the fifth overall pick in last year’s draft. He’s an intimidating 6’5”, 231-pound presence on the mound, and can dial his heater up to 94 mph. A power lefty with a frame that scream durable? I’ll buy that for a dollar. Pomeranz will make his pro debut this year, and don’t be surprised if he moves quickly – this dude was filthy good in his last season of college, averaging 12.4 Ks/9.

46. Devaris Gordon, SS, Los Angeles Dodgers (NR): Gordon enjoyed an excellent pro debut in 2008, but he really arrived as a prospect in 2009 when – in his first year of full-season ball – he was named the top prospect in the Midwest League and was co-MVP after batting .301 with 96 runs and over 70 steals in 131 games. He’s an absolute burner, is very athletic and can really pick it at shortstop. Gordon moved up to Double-A last year and wasn’t nearly as dominant, as his walk rate slipped and his stolen base total dropped substantially. He remains one of the top prospects in the Dodger system, but I really need to see Gordon become a more selective hitter before anointing him as a potential impact lead-off man in the majors. History is littered with burners that couldn’t steal first base. I’m not saying he’s doomed to follow that path, but I’ll be watching Gordon’s on-base percentage and batting eye very closely this season, and that will determine whether he rises on our list or slips into oblivion.

45. Jose Iglesias, SS, Boston Red Sox (NR): Iglesias’s adjustment to North America should be even easier now that his father has left Cuba and joined him in the U.S. Known for his smooth glovework, Iglesias will soon be taking the spot that Marcos Scutaro is only minding on a temporary basis for the 21-year-old young Cuban. Last year was the first professional season for Iglesias, and he certainly didn’t look overmatched, batting a robust .350 in Low-A before forcing a promotion to Double-A, where he showed modest gap power and a bit of speed while batting a very respectable .285. A very large shortstop (6’5”, 220), Iglesias won’t steal many bases, but should provide decent across-the-board production in every other facet.

44. Nick Franklin, SS, Seattle Mariners (NR): This 19-year-old is considered the be the shortstop of the future for the Mariners, but he won’t be ready for prime time for another couple of years. If he can’t stick at shortstop, Franklin has also shown the ability to play at second base and in the outfield, so Seattle will find a spot for his bat. Last year, in his first full season as a pro, Franklin was very productive at Class-A, showing power, speed and a bit of patience. The high strikeouts worry me, but they didn’t prohibit him from putting up a decent .281 BA. We’ll know more about how Franklin’s power-speed potential will pan out once he gets to the higher levels of the minors, but he’s an extremely intriguing keeper league prospect that will soon be on the radar of redraft league owners as well.

43. Brett Jackson, OF, Chicago Cubs (NR): Many experts aren’t nearly as high on Jackson as I am, but I believe he’ll be the Cubs’ lead-off man by mid-season 2012 at the latest. The Cubs’ supplemental first rounder (31st overall) from 2009 is in camp with the big league team this spring, but realistically he’ll probably begin the season at Double-A with a mid-season promotion to Triple-A in the offing if he excels. I love Jackson’s on-base skills (over .400 in his career, .420 at High-A last season), and I see him as a nice across-the-board contributor down the line. We’re talking about a dude that will flirt with a .300 BA, produce upwards of 15-to-20 homers and steal 20-to-25 bases.

42. Michael Pineda, SP, Seattle Mariners (NR): Ever since he turned pro in 2008, Pineda has been putting up impressive numbers and so far the only thing that’s been able to slow him down has been injuries. Elbow problems cost him a good portion of 2009, but he remained healthy last season, blowing through Double-A and pitching extremely well at Triple-A (except for some long-ball problems that skewed his otherwise superb numbers). Pineda is blessed with an intimidating frame (6’5”, 180), and the fact that he averaged 11 Ks/9 at Triple-A tells me that he’s almost ready. He needs some fine tuning with his mechanics and secondary pitches, so I’d expect Pineda to start the season at Triple-A, but he should definitely get his first look in Seattle at some point this year.

41. Alex White, SP, Cleveland Indians (NR): White, the Indians’ first rounder in 2009, got a brief look in the team’s big league training camp last year before embarking on his first professional season. He was widely expected to go in the top 10 picks in 2009, but he slipped to 15 and Cleveland looks like it got a steal so far. Last year, White made quick work of High-A, and then looked even sharper after a promotion to Double-A. The Indians have a few solid young pitching prospects on the way, and White heads the list and is coming fast. He’ll battle for the fifth starter job this spring, but more realistically will arrive in Cleveland by September.

By RotoRob
Tags: 2011 MLB Draft Kit
This entry was posted on Thursday, February 24th, 2011 at 12:46 pm and is filed under 2011 RotoRob MLB Draft Kit, BASEBALL, Cheat sheets, Prospects, RotoRob. You can follow any responses to this entry through the RSS 2.0 feed. Both comments and pings are currently closed.