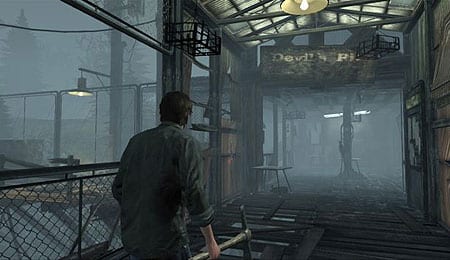 The world of Silent Hill is unrelentingly drab and depressing.

When the term “survival horror” is invoked most gamers think of one of two franchises: Capcom’s Resident Evil or Konami’s Silent Hill. And while the former has shifted toward action, Silent Hill is offering gamers a true throwback experience in Downpour — a game that knows what tricks and twists you’ve learned to expect from the genre, and yet still manages to scare the hell out of you with them.

One day, perhaps in a distant utopia, developers will find a way to simulate a lack of combat and firearms training without resorting to clunky controls. Unfortunately, combat in Silent Hill: Downpour is rooted in this tried and true method. During melee fights you can block with “Y” and flail away using your weapon of choice with “X.” It’s not too bad when going one-on-one against something, but when the odds get stacked it gets frustrating. Drawing a gun brings up a tiny dot for a targeting reticule; not surprisingly it’s difficult to shoot enemies with much accuracy. Even worse, enemies can actually get too close to be shot. When this happens you’ll need to run away to create some distance and then try again.

Outside of combat, things function competently. Running is done with the right bumper, and you can look over your shoulder with the left. The d-pad is used to equip a gun or access your inventory. “A” is the multi-purpose button — used to open doors, pick up objects and the like. There is one notable issue here: the game doesn’t distinguish between item types. Therefore, you’ll frequently waste time picking up weak weapons (and then putting them down again) because it’s not always obvious what you’re being prompted to grab.

There are a number of issues with the graphics in Silent Hill: Downpour. Textures are often painfully slow to load, pop-in is common and the frame rate grinds to a halt far too often. Enemy variety is also quite shallow and not representative of the franchise. All that being said, Downpour succeeds in its most important endeavor: creating the mood.

Playing through the game can be legitimately oppressive after a while, and in fact every single one of my gameplay sessions was followed by playing another game. I just had to coax those creepy images out of my head. Downpour simply never relents, pushing you forward from one hellish ordeal to another with a sinister mixture of jump scares and ambient dread. It’s an unsettling game at the best of times, though to get the full effect make sure to play it at night with the lights off.

Much of your time in Silent Hill will be spent in relative silence with a few creepy bars here and there to keep you on edge. Voice acting is solid and measured with minimal histrionics — quite a feat given the circumstances you’re in. As with the music, sound effects are understated, allowing you to hear the subtle click of a lock mysteriously being opened in a pitch dark room and letting your mind wonder just who or what is waiting for you.

Silent Hill: Downpour casts you as Murphy Pendleton, a prisoner you’re introduced to during a vicious opening sequence. The particulars of Pendleton’s incarceration are initially a mystery, and while being transferred to another penitentiary, a bus crash deposits him outside the town of Silent Hill. Unarmed and ill prepared for what’s to come, Pendleton must now find a way to escape not only the town itself, but also his murky past.

The gameplay features a mixture of puzzle solving, exploration and combat (and, in fact, offers separate difficulty settings for combat and puzzles). While two of those elements will be familiar to series vets, exploration takes on a significant role for the first time. As mentioned earlier, this is a throwback title, and with that comes relatively vague goals for progression. Combine that with a number of interesting side quests and you’ve got plenty of incentive to explore.

As you progress and learn more about the town and its former inhabitants, you also start to piece together Pendleton’s story. Some of this comes from documents scattered throughout while other elements are told through flashbacks. This proves to be among Downpour’s strengths with Pendleton emerging as an interesting, three-dimensional protagonist. You’re even granted a limited ability to mold him as you see fit through a handful of “moral” choices. These may not change the individual scenes significantly, but they help determine which of the game’s half-dozen endings you get.

Puzzles are well implemented, though even on the hardest setting they shouldn’t stump gamers for very long. Usually higher difficulty equates to little more than an extra step or two, or in the case of some fetch quests an item that is tougher to locate.

And then, of course, there’s combat. As already touched upon in the controls section, combat in Downpour can range from imprecise to infuriating. Yes, the game openly tells you that running away is often a better solution than fighting, but when enemies can stun you with shrieks or trap you in tight spaces amid a hail of melee blows, that isn’t always possible. Typically when roaming the streets you’ll be alright, even when the hard rain ramps up enemy aggression, but inside buildings you may be fighting the urge to fling your controller across the room.

Beyond the absence of a targeting system and elongated attacks that leave you open for a world of hurt should you miss, the game also delights in breaking your weapons mid-fight. Whether you’re carrying a fireman’s axe, cleaver, baseball bat, etc., they all break, and much quicker than you’d like. This leads to plenty of frantic scrambling to grab anything to fend off an enemy. It keeps you on your toes to be sure; it just happens too much to feel at all organic.

However, whatever the game lacks in combat elegance, it does such a great job of creating a tension-filled adventure that it’s worth putting up with. Silent Hill: Downpour is full of memorable set pieces that will stay with you after the credits roll. Still, gotcha moments are only a small piece of what’s on offer here, and it’s really more the sum of the parts that make it so intense. Within that, special recognition goes to the “other world” segments, which produce some spine tingling sequences that I always wanted to get through as quickly as possible.

I spent over 10 hours completing the game, including the full lineup of side quests (except the one that’s only available on a second playthrough) as well as locating all mysteries in the process. The aforementioned multiple endings offer some incentive for another trip, though I can’t imagine a second run would be as enjoyable — at least not until you let enough time pass to forget some of the scares.

It’s also worth noting that I did encounter some glitches during my time in Silent Hill. On a couple of occasions the game froze when entering a building that required it to load the interior. There were also some instances when I had to leave a place and return to trigger an event or to be able to interact with an object. None of these items were game breaking, but when you pair them with the frame rate issues it can make the game feel unpolished.

It has been said that “the anticipation of death is worse than death itself.” That, in a nutshell, is Silent Hill: Downpour, a game that constantly keeps you on edge by not only making you wonder what’s going to pop out around the next corner, but utterly convincing you there will be something… even when there won’t. Some graphical inadequacies and clunky combat can’t undermine that feeling, which makes it a good pickup for gamers seeking a scare.

By Herija Green
This entry was posted on Monday, March 26th, 2012 at 6:53 pm and is filed under Herija Green, Video Game Reviews. You can follow any responses to this entry through the RSS 2.0 feed. Both comments and pings are currently closed.