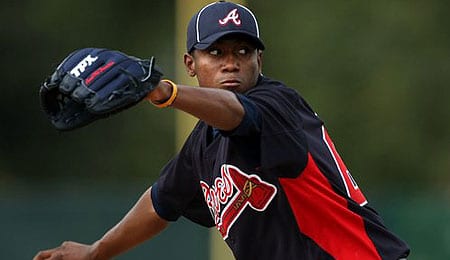 Julio Teheran wasn’t at his best Sunday, but he’s got a chance to be a special pitcher.

We’re back with another batch of the 2012 RotoRob MLB Draft Kit, today taking a look at the top 10 rookies. Note that these are not necessarily our top prospects (we’re working on that list now), but the 10 players with rookie eligibility (less than 130 at-bats or 50 IP) — in no particular order — that we think will have the biggest Fantasy impact in 2012.

So while you wonder how Miguel Cabrera will fare at the hot corner (do you own any Tiger groundball pitchers?), let’s take a look at a few kids that could make their mark this season.

Matt Moore, SP, Tampa Bay Rays: The lowest strikeout rate this dude has posted was 11.52 per nine at Double-A to begin last season. Are you freaking kidding me? Even if this lefty takes his licks — as most rookie hurlers are wont to do — he’ll still be a major asset because of the Ks. The abdominal strain Moore was dealing with earlier this spring is in the past and it’s full speed ahead now for stud in the making.

Julio Teheran, SP, Atlanta Braves: At the age of 20, this righty put up dominant numbers at Triple-A and has proved nearly impossible to take yard in the minors. A candidate for the fifth starter job in Atlanta this spring, Teheran will be a factor with the Braves at some point this year even if he doesn’t bag the job right away (which seems less likely after giving up six dingers Sunday). He may not be an ace, but he’s definitely a future No. 2 starter in the bigs.

Devin Mesoraco, C, Cincinnati Reds: Thankfully, the Reds didn’t do something stupid and bring Ramon Hernandez back, so Mesoraco will be either the starting catcher or at least in a timeshare this season. He’s got power, a pretty good batting eye and has the chance to hit for a solid BA. Mesoraco took a while to get rolling as a pro, but since 2010 he’s been on the fast track and that route lands in Cincy this year. No one is questioning his stick; what he needs to work on is getting to know and handle the Reds’ staff.

Anthony Rizzo, 1B, Chicago Cubs: Rizzo made a mockery of Triple-A last year, and while he failed to live up to the hype in his brief time in San Diego, let’s not forget that he spent almost the entire season at the tender age of 21. A trade to the Cubs doesn’t necessarily open up immediate playing time (he’s now behind Bryan LaHair), but he moves to a better hitter’s park and has less of a long-term obstacle to get the job. Expect Rizzo to be back soon and once he’s entrenched, he’ll ultimately be a power hitter who’s capable of maintaining a high BA. Don’t let his false start deter you.

Jesus Montero, C, Seattle Mariners: Mickey Mantle, Joe DiMaggio, Tony Kubek… and Jesus Montero — the four Yankees that have had multi-hit games in the playoffs before the age of 22. Yes, Montero is ready to rake and the fact that he’ll qualify at catcher makes him an even more exciting prospect. He’ll flirt with .300 and bash 25 or more homers and while a trade to Seattle and pitcher-friendly Safeco stings a bit, he’ll have more opportunity in a prime RBI spot and could very well be the Mariners’ best hitter — this season.

Mike Montgomery, SP, Kansas City Royals: Okay, so he surrendered too many baserunners at Triple-A, but Montgomery’s rising strikeout rate suggests he’ll soon be ready to take on big leaguers. The PCL tends to skew pitching results, so take last year’s number with a grain of salt. Yes, you’ll need to exercise patience, but this lefty is a future major league No. 2 starter.

Brett Jackson, OF, Chicago Cubs: The only reason Jackson didn’t get a September call-up was because the Cubs decided it would be better for him to play with Team USA in the World Cup – something he would have been ineligible for if he was on the 40-man roster. But after tearing it up for a half season at Triple-A, Jackson is almost ready to take over center field for the Cubs and he projects as their leadoff hitter of the future. Whether he breaks camp with the team when it heads north or not, this kid will be heard from this season.

Brad Peacock, SP, Oakland A’s: Few minor leaguers made as many gains as Peacock did last year, squarely arriving on the prospect map and putting himself in a position to win a rotation spot this spring. Yet another top rookie prospect that was dealt this winter (from Washington as part of the Gio Gonzalez trade), Peacock won’t be an ace, but with his off the charts command and sweet fastball/curveball combination, he’ll get plenty of big leaguers out.

Rex Brothers, RP, Colorado Rockies: Brothers has got closer stuff that he can blow by hitters; all he needs is an opportunity to earn saves. Be patient… that chance is coming. Let’s face it, Rafael Betancourt — the only man standing between Brothers and the closer job — doesn’t exactly have a long track record nailing down saves.

Zack Cozart, SS, Cincinnati Reds: Cozart shook off a slow start at Triple-A and mashed his way onto the Reds where he excelled immediately before a season-ending injury. Expect him to bag the shortstop gig in Cincy this year and supply the kind of power not normally associated with the position, while also proving some speed and a solid BA.

By RotoRob
This entry was posted on Monday, March 5th, 2012 at 7:48 pm and is filed under 2012 RotoRob MLB Draft Kit, BASEBALL, Cheat sheets, Rookies, RotoRob. You can follow any responses to this entry through the RSS 2.0 feed. Both comments and pings are currently closed.