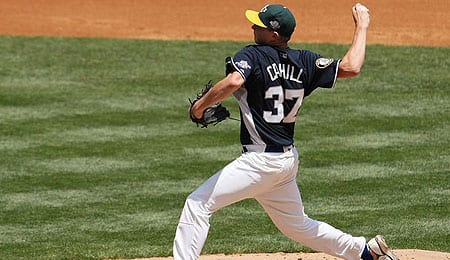 The A’s have already sent Trevor Cahill packing. Is Gio Gonzalez next?

The Gio Gonzalez trade rumours just won’t go away. Surprisingly, it was rotation mate Trevor Cahill, not Gonzalez, that was dealt away from the A’s, but Gonzalez is still very much on the table. The Mets are reportedly the latest team to enter the fray, and damn, could they ever use him.

Other teams that are said to be interested are Miami (is there anyone the Marlins aren’t after this offseason?), Seattle (which would be wiser to use its assets to acquire offense, not pitching), Cincinnati (which definitely needs the starting pitching), Boston (again, could use the upgrade) and Texas (which needs Gonzalez less desperately than most on this list).

Heading into 2011, we expected Gonzalez to be among the top 30 Fantasy starting pitchers and he definitely achieved that, probably ending up among the top 25.

He maintained his fine hit rates and put up career bests in wins, strikeouts and ERA. In fact, there’s probably not a team in the majors that couldn’t find a place for the 26-year-old southpaw.

However, Oakland is reportedly asking for a King’s ransom for its ace. Some reports suggest the Mets are reportedly dangling Ike Davis, who’s on the cusp of a breakout and would provide the A’s with the much-needed sock they crave. However, others say that Davis is not on the table, and neither is Jonathan Niese, Matt Harvey, Zach Wheeler, Jenrry Mejia and Jeurys Familia. That doesn’t leave a lot of trade chips, so don’t expect Gonzalez to be headed to Queen’s.

One rumour suggests that for Gonzalez the A’s asked the Yankees for a package that included Jesus Montero, Manny Banuelos and Dellin Betances. Like I said, they want the world back.

Others teams that have apparently shown in interest in Gonzalez are Detroit, Washington and Toronto. Surprisingly, the Cubs haven’t shown any interest (at least none that has been mentioned), but they’re definitely a team that needs a rotation upgrade.

By RotoRob
This entry was posted on Saturday, December 17th, 2011 at 2:21 pm and is filed under BASEBALL, MLB Today, RotoRob. You can follow any responses to this entry through the RSS 2.0 feed. You can leave a response, or trackback from your own site.