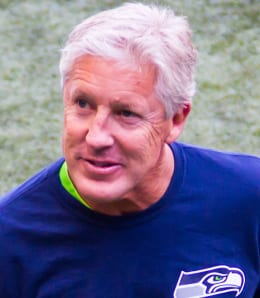 Sunday afternoon features a vintage matchup between HC Pete Carroll‘s visiting Seattle Seahawks and rookie HC Matt LaFleur‘s Green Bay Packers. While Jadeveon Clowney knocked out Carson Wentz to help Seattle handle Philly in the NFC Wild Card game — an effort that Carroll was quite pleased with (see video below) — the Seahawks are just 4-7 on the road in the postseason and have never won at the mystic Lambeau Field. Seattle will need every bit of Russell Wilson to pull off this historic upset. Packer QB Aaron Rodgers, meanwhile, will need to be better than he was against Detroit two weeks ago if Green Bay hopes to head to the NFC Finals.

Wilson enters Cheesehead Nation following an 18-325-1 performance with no interceptions in the win over Philly. The Seattle QB will need to throw cautiously once more, as the Packers capitalize on turnovers and defend the red zone much better than the Eagles despite both pass defenses giving up similar yardage. Green Bay’s QB pressure is no joke either; 12th on the season with a 7.5 per cent success rate. However, despite of his Duane Brown-less O-line, Wilson will have little choice but to sling it in order to compensate for his up-and-down defense.

Marshawn Lynch and Travis Homer must show up this week against an inferior run defense giving up an anemic 4.7 yards per carry with 32 yards per game more than the Eagles during the regular season. Despite the juicy matchup against league’s 31st-ranked run defense (according to adjusted line yards) ample evidence dictates the 33-year-old RB lacks explosiveness to do real damage and the rookie RB won’t see the running lanes.

Metcalf, a 4.33s 40-yard dash, 6’3″ 228-pounds freak of nature, went Super Saiyan on Philly’s DBs, dunking them for 7-160-1 during Wild Card weekend. CB Jaire Alexander doesn’t stand a chance if Green Bay decides not to double Metcalf. However, expect the rookie WR to concede production to Moore this week as Metcalf’s outlook fares better on intermediate routes than deep ones.

Lockett will be matched up against CB Tramon Williams, who is having a career year. Allowing 2.4 receptions per game for an average of 12.4 yards but just an 82.9 pass rating thanks to two interceptions, Williams is the most consistent performing DB in the Packers’ corps. Expect Wilson to toss it up to Lockett a couple of times on deep option routes despite knowing that.

Moore is in for a sneaky good day against flailing CB Kevin King. Like many teams before, Seattle will attack King because (a) he’s the weak link in the secondary; and (b) it will force LaFleur to expose defensive schemes. With Metcalf likely blanketed by a DB and safety and Lockett tangled with Williams, Moore stands out as a reliable target in the red zone. All Seattle WRs receive a touchdown uptick this week.

Green Bay is middling against tight ends, so expect Hollister to put up his usual numbers.

Aaron Rodgers finished the season going 353-4,002-26 with only four interceptions. The careful and, at times, tedious rebuilding of the Packers has proven fruitful. Not unlike Seattle’s offense, Green Bay features a dedicated run game supplemented by throws on third downs (although the Packers’ playcalling on third down has left something to be desired). Rodgers has been asked this year to feature more play-action, especially rolling out with his back against the field. Moreover, not unlike Green Bay’s defense, Seattle’s defensive philosophy entails playing opportunistic bend-don’t-break football (the Seahawks’ D has given up 257.9 yards per game in the air, but just an 85.6 pass rating).

Coach LaFleur will not be featuring Rodgers this game, but instead calling the numbers of Aaron Jones and doubtful scratch Jamaal Williams. The pair will have a 25+ touch day as they stare down the barrel of a run D allowing 117.8 yards per game at 4.8 yards per carry. Thanks to Green Bay’s undervalued sixth-ranked rushing O-line, Williams and Jones are in store for career days; just don’t expect much passing production from them.

Better-than-good DB Tre Flowers will be Adams’ primary matchup but don’t fool yourself into thinking the WR will receive single coverage. Allowing 4.6 receptions per game at 11.8 yards per clip and four touchdowns with two interceptions, Flowers is allowing an 87.7 pass rating when thrown to. Expect Rodgers to force his usual targets to Adams despite the spooky matchup.

MVS replacement Lazard has a stellar contest with DB Shaquill Griffin, who is allowing a passer rating of 116.3 due in part to giving up five touchdowns while unable to claw back any interceptions. Rodgers will find Lazard a handful of times especially during third downs.

TE Graham has an upside matchup against a pass defense which allowed 6.24 receptions for 70 yards per game against tight ends during the regular season. Diggs muddles Grahamss outlook, but the recently acquired DB should be focused on Adams. Expect Graham to clear four targets on 40 yards.

Here’s another track from Slave to Love: The Best of the Ballads, the 2000 compilation album by Bryan Ferry, who is a member of the Most Excellent Order of the British Empire. Here’s “Will You Love Me Tomorrow,” originally released on 1993’s Taxi.

Now it’s your turn. Let us know in the comments below how you think this matchup will go.

On this week’s episode of RotoRob Fantasy Football Weekly Podcast, heard every Wednesday at 1:30 p.m. on Blogtalkradio, Nick Wagner and Josh Johnson were joined by Dayna O’Gorman of NFLfemale.com.

On this week’s episode of RotoRob Fantasy Football Weekly Podcast, heard every Wednesday at 2 p.m. EST on Blogtalkradio, Nick Wagner and Josh Johnson were joined by Brandon Folsom of Ubbullrun.com and MLive.com and Chris Vannini of TheOnlyColors.com.