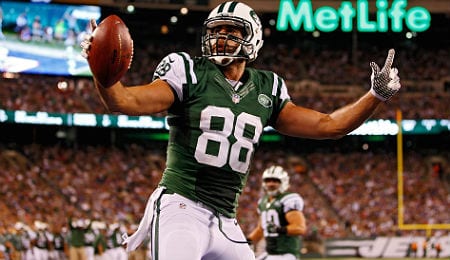 Jace Amaro was the top rookie TE in the NFL this season. (Turnonthejets.com)

As they do in every NFL season, injuries happen and bye weeks waft their stench. Chances are you made a dozen or so waiver claims the season, each hastier than the one before. And sometimes you throw that dart at the wall and it sticks! Here are four such darts that more than likely drew your opponents’ blood and left the waiver pool murkier than a South Dakota stream in the springtime.

Derek Carr, QB, Oakland Raiders: While we could have given this honour to Eli Manning, Carr seemed a more appropriate choice. Unbeknownst to the Cleveland faithful, Carr is the leading rookie passer in almost every positive category. Obviously it’s too early to tell but he appears to be a steal as the fourth QB taken (second round) at least comparatively so. If you nabbed Carr this season, he was probably nothing but bye week material and his future ceiling is very weapons dependent. As for this season he was just a QB2 with upside. Solid performances versus San Diego and San Francisco were the highlights for the promising sliver and black signal caller. Even with a B-Squad of WRs, Carr managed 3,100 yards passing as well as 20 TDs to 14 total turnovers. Rookie numbers have and will be in the future much harsher.

C.J. Anderson, RB, Denver Broncos: After a decent Week 10 line (163 total yards) versus Oakland, we mentioned that Anderson had earned himself more touches. Montee Ball and Ronnie Hillman were out for the foreseeable future and Juwan Thompson lacked the all-around pizzazz Anderson showed in his first start. It was a mere mention and we are sure many of our peers wrote about him as well. In the weeks that followed Anderson would become the dream back for this Broncos offense, highlighted by back-to-back 160-rushing yard efforts versus Miami and Kansas City and a three-TD performance against Buffalo. He even did his best Knowshon Moreno (circa 2013) impression by catching eight of 10 targets for 86 yards in a bad loss to St. Louis when Denver had to throw because it was trailing most of the game. Without question, Anderson should be the Broncos RB1 next season.

Odell Beckham Jr., WR, New York Giants: Potentially the rookie of the year, Beckham has hands of glue. It’s easy to forget he missed the first four games of the season because of injury. Even sitting the first quarter of the year, Beckham still managed to reach the 1,100-yard plateau. When we recommended him in Week Six he had caught four balls for 44 yards and a TD versus Atlanta. We were impressed but certainly not sold. After two more games Beckham had scored two more TDs on just six receptions for very little yards. Then after the Giants bye week in Week Eight, he played like possessed fisherman catching everything in sight. Since then, Beckham has done no worse than six receptions and 90 yards per game while scoring eight more times in eight games.

Jace Amaro, New York Jets: When we initially recommended Amaro in Week Six he had just 14 receptions in five games. Then he set our hearts aflutter with 10 receptions for 68 yards and his first career TD (see video below) in Week Seven. And we were on PPR alert moving forward. A lingering concussion consumed a month of his season, but Amaro still led all rookies TEs across the board. Given the nasty QB fiasco and the fact fellow rookies TEs Eric Ebron and Austin Serefian-Jenkins were flanked by Calvin Johnson–Golden Tate and Vincent Jackson–Mike Evans respectfully while Amaro simply had Eric Decker should leave little doubt about his future prospects.

Now it’s your turn. Let us know in the comments below who you favourite Fantasy football waiver wire picks of the 2014 season were.

If you fall in a rusty bucket you are bound to come out with an orange stain on you buttocks. Yet you are not made of metal, and neither is Lee. While the shiny rookie luster has been fingerprinted with injuries, he is finally healthy. Lee is still a bottom of the bucket option but the rest of Jags WR corps is now injured. He is facing the Giants, people. While we hesitate to suggest Lee will score multiple TDs, we still love his chances.