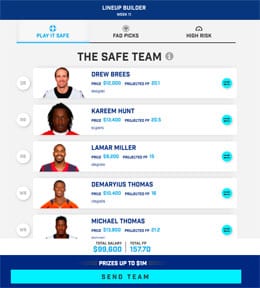 How’s a newbie supposed to compete against those odds?

A new DFS product is designed to address this very issue.

Fantasy Advantage is a free tool billed as the only DFS solution that’s fully integrated with the major platforms (FantasyDraft and FanDuel).

“We believe that daily fantasy shouldn’t be so complicated, so we created Fantasy Advantage to help users play like the experts without spending hours on research and without paying for expert analysis and data,” Lifshitz explains.

“Our aim is to bring the fun back into the game. All you have to do is use our technology, trust your instincts and play.”

Created by a pair of ex-Google employees, the product features an intuitive user interface and machine learning technologies designed to give new DFS users a better chance against experienced players.

Lifshitz says that what makes Fantasy Advantage different than all those lineup optimizers out there is that it’s squarely targeted at new entrants.

“Unlike all of the other products in the market, we don’t target professional players,” he says.

The technology behind the product may be complex, but the end product is clean and user friendly, and, Lifshitz says, unmatched for mobile use: “we currently offer the best mobile experience in the market.”

According to the Fantasy Sports Trade Association, Fantasy sports is now a $32 billion market in the U.S. alone. But the big DFS providers are now under pressure to acquire and retain users given that they can no longer advertise online and casual players are getting tougher to keep because of the difficulty in competing against professional players that are leveraging algorithms and massive data.

So a product like Fantasy Advantage that will help level the playing field for newer players has to be a welcome development for the FanDuels and DraftKings of the world.

“Over 25 million articles are written on Fantasy football in the U.S. every week,” Lifshitz says. “While a human user has no way of covering even a small portion of that data, let alone drive conclusions, the current data processing technology allows us to harvest all of that information in order reach actionable insights in minutes. By using our technology, our users gain an unfair advantage against their competitors.”

Fantasy Advantage’s system even has safeguards to protect against last-minute injuries, role changes or lineup changes because its algorithms are updated every few seconds.

Lifshitz says they’re currently working on a new system that will be able to update users of key information instantly through email and text.

Now it’s your turn. Have you tried Fantasy Advantage? Let us know what you think of it in the comments below.