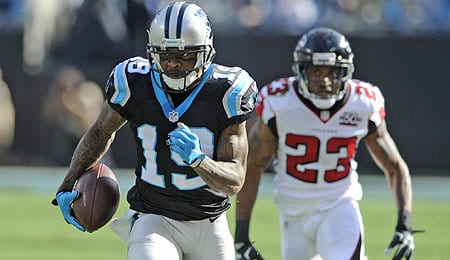 After going a sparkling 15-1 and making it to their second Super Bowl last season, what can the Carolina Panthers do as an encore this year?

You’ve got to figure anything short of making it back to the big game would be a bit of a disappointment. Let’s examine some storylines and Fantasy worthy notes emerging from the Panthers’ training camp.

QB Cam Newton, the NFL’s MVP last year after enjoying a breakout that saw him become the top Fantasy scorer in the game, had some hiccups early in camp, tossing several picks to a few of the rookie cornerbacks. He sure looked more like himself on Wednesday, hurling a long TD pass to Ted Ginn Jr. and then going deep to Damiere Byrd. (Speaking of Ginn, see what the FNTSY Sports Network had to say about his 2016 Fantasy prospects in the video below.)

Newton threw more passes last season, upping his average completion yardage while shattering his career high by connecting for 35 TD passes — tied for second in the NFL. He remains the key to this team breaking through for its first championship and will likely be the first quarterback off the board in your draft.

With DeAngelo Williams heading to Pittsburgh last year, veteran RB Jonathan Stewart enjoyed a nice bounce back even if his lack of 1,000-yard seasons (just the one, in 2009 — his second season) make him seem overrated. Still, we’d consider Stewart a pretty good RB2 for your Fantasy football team.

He enjoyed a career high in caries last year, and if he can stay healthy in 2016 (after missing three games last season), he could reach 250 for the first time. Youngsters Cameron Artis-Payne and Brandon Wegher will spell Stewart a bit during the season, but the veteran is again expected to have a very big workload. In fact, the team is taking it easy on Stewart during training camp to preserve the ninth-year back for the long haul.

The Panthers took cornerbacks in the second, third and fifth rounds of the draft (James Bradberry, Daryl Worley and Zack Sanchez) and the entire trio is impressing at camp. It’s not that Carolina’s pass defense was bad last season, but these youngsters could help make this unit one of the top outfits in the NFL in 2016.

Another thing to watch this year in Carolina is how much better the team’s offense could be now that WR Kelvin Benjamin is back. After enjoying a stellar rookie campaign in 2014, he tore his ACL last August and missed the entire 2015 season as a result.

We’ll be fascinated to see how much better Benjamin can make Newton and vice versa. At this stage, consider Benjamin a very solid WR2 with possible upside.

Looking for Fantasy sleeper on this team? Considering Stewart’s injury history, Artis-Payne could very well emerge with some value. A fifth rounder last year, he toted the rock 45 times as a rookie last season, putting up some serviceable numbers. Should Stewart suffer yet another health woe (he’s only played in 41 of a possible 64 games the last four years), Artis-Payne would immediately become a very interesting player to grab.

Now it’s your turn. Let us know in the comments below how well you think the Cats will do this season and who you’re targeting from their squad for your Fantasy team.

By RotoRob
Tags: Carolina Panthers, Super Bowl
This entry was posted on Thursday, August 4th, 2016 at 3:44 pm and is filed under FOOTBALL, RotoRob, Team report. You can follow any responses to this entry through the RSS 2.0 feed. Both comments and pings are currently closed.