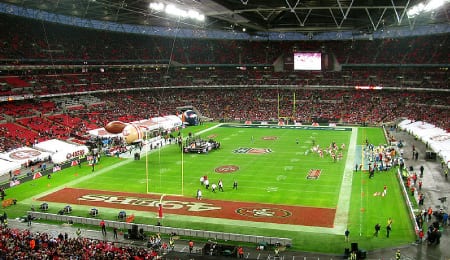 In 2007, the National Football League opted to host regular-season games outside of the United States. The very first game, between the Miami Dolphins and the New York Giants, was staged at Wembley Stadium in London, England on October 28, 2007. The demand for tickets was huge with the first release of 40,000 selling out within 90 minutes. Despite QB Eli Manning throwing for a mere 59 yards, the Giants won the history-making game 13-10.

Stats to Consider for Fantasy Owners

Seeking every advantage you can is vital when dealing with any kind of wagering or prediction. Sports bettors know well that there is a wealth of stats available to help you make more accurate picks. When you click here you’ll see certain casino providers like Unibet also offer top-rated sportsbooks, with bonuses for new players that might help you get started in the statistics-driven betting world. Similarly, Fantasy owners must analyze stats and data and use all the information available in order to make those crucial decisions that can give them an edge. And that includes how a team performs under certain conditions.

In total, there have been 32 NFL International series matches. But which teams have fared best? And which ones have struggled abroad? This information could be useful when making weekly decisions on your Fantasy roster.

Because of a contractual arrangement with Wembley Stadium that is up for renewal in 2020, the Jacksonville Jaguars have played more games outside of the USA than any other team. Their record over seven games stands is 3-4, for a .429 winning percentage. However, the Jags were smashed by 26-3 by the Houston Texans at Wembley last year, failed to make much of an impact in any position in the 2019 Fantasy rankings (other than Leonard Fournette being a low-end RB1 — and a stud in the virtual world as well, as you can see in the video below — and the team defense being a solid unit for Fantasy purposes).

Behind the Jaguars, the team formerly known as the Oakland Raiders has been the most prominent club in the International Series with five appearances of which it has won two and lost three (for a .400 winning percentage). The Raiders were the first team to win an NFL match at the newly-constructed Tottenham Stadium, beating the Chicago Bears 24-21 in a tight game on October 6, 2019. The team has since relocated and been renamed the Las Vegas Raiders and remains a bit of an unknown quantity for Fantasy gamers with few obvious impact players (although Josh Jacobs should be a decent RB1).

Of the teams that have played internationally more than once, the New England Patriots (surprise, surprise) have been the most successful with three wins from three games, for a 100 per cent win ratio. The Patriots picked up their first win at Wembley Stadium in 2009 when they destroyed the Tampa Bay Buccaneers 35-7 despite Tom Brady getting picked off twice. Their next victory in London in 2012 was even more emphatic as they strolled to a 45-7 win over the St. Louis Rams (even after the Rams opened the scoring three minutes in with a 50-yard touchdown pass by Sam Bradford). New England’s third win came in Mexico City in 2017 when it beat the Oakland Raiders 33-8 thanks to a vintage Brady performance (339 yards passing and three touchdown passes).

The team with the worst record in the NFL International Series is the Tampa Bay Buccaneers, having lost three out of three including the aforementioned defeat at the hands of the Patriots in 2009. Despite a furious fourth-quarter comeback attempt, the Bucs also lost 24-18 to the Chicago Bears at Wembley Stadium in 2011, and 37-26 to the Carolina Panthers at the Tottenham Hotspur Stadium in 2019 (thanks to seven turnovers). That game, just the second NFL game to be staged at the soccer stadium in North London, was attended by over 60,000 fans and featured Panther superstar Christian McCaffrey, the best running back in the 2019 Fantasy rankings.

Despite its defeat in London, Tampa Bay featured the fourth-ranked Fantasy quarterback for the season, Jameis Winston. His 2019 season included 33 touchdowns, 30 interceptions (ugh) and 5,109 yards passing. To be honest, it was a performance that few predicted. Can Winston keep it up in 2020 or is he overvalued in the offseason? Given that he has yet to land a contract and demand for his services is reportedly soft, it sure looks like the answer is evident. 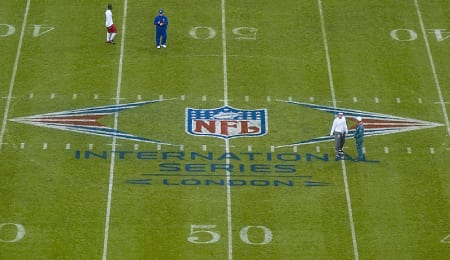 There have been talks about expanding the International Series to Canada (which has already hosted many regular season games for the Buffalo Bills) and Germany as the NFL continues to reach out to its global fan base. Previously, there had been a conversation about hosting games in China but those talks have since stalled. In the meantime, fans in Mexico City and London should be able to enjoy annual NFL games for the foreseeable future.

American drummer Bernard Purdie has been performing since 1958. In 1974, he recorded the soundtrack for the Blaxploitation film, Lialeh, from which the title track is his best known work. The album also featured this groovy joint, “Hap’nin.”

Now it’s your turn. Let us know in the comments below what you think of the NFL’s International Series and where else you think the league should consider hosting games.

By Oscar Hall
Tags: NFL
Posted in FOOTBALL | Comments Off on Biggest Winners and Losers in the NFL International Series