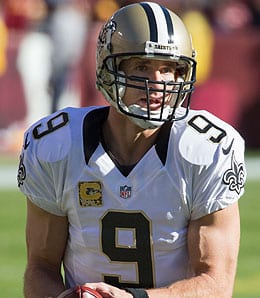 New Orleans Saints quarterback Drew Brees may be closing in on the big 4-0, but so far in 2018, he’s never looked better.

Currently trailing just early-season surprises Ryan Fitzpatrick and Patrick Mahomes in Fantasy points, Brees has been lights out for the 2-1 Saints. He’s yet to be picked, is completing over 80 per cent of his passes and is already closing in on 1,100 yards passing through three games, putting him on pace for a career-best 5,749 yards.

Brees should just keep on rolling in Week Four against a Giants’ team that ranks 19th in fewest points allowed vs. quarterbacks so far. Houston’s Deshaun Watson went off for a season-high 385 yards passing against the G-Men in Week Three, so what will Brees do against them?

In Week Three, Brees ripped apart the Falcon secondary for a season-high 39 completions, matching his season-best with three touchdown passes. Hell, he even rushed for a pair of scores, including the game-winner in OT. Perhaps he solved world hunger and cured cancer during halftime.

We’re not sure the Saints want the 18-year vet throwing nearly 50 passes and potentially getting creamed each game (although, to his credit, he sympathizes with defenders — see video below), so keep an eye on that going forward. Still, this dude has proved he’s one of the best in the biz at reading and analyzing defensive coverage schemes.

Consider Brees a slam dunk QB1 this week and likely a top five performer at his position, and while the Giants have been allowing opposing quarterbacks to run so far, Brees will likely stick mostly to the air with running back Mark Ingram still on suspension for one final week.

More bad news for New York fans: Brees has owned the Giants in his career, beating them five times in seven games and completing over two-thirds of his 259 passes while putting up 20 touchdowns against just four picks.

Here’s another scary thought for the rest of the NFL: September is traditionally Brees’ weakest month of the season, so — ostensibly — the best is yet to come in 2018.

And for the betting fiends among you, here’s a real easy parlay: take the over on any Saints’ game this year. Since Brees and Head Coach Sean Payton have teamed up in the Big Easy a dozen years ago, this team has always had a great offense and a particularly porous defense. This year is no exception as the D is struggling to stop anyone and the O is rolling over everyone. Expect a lot more games like Week One (48-40 loss) and Week Three (43-37 overtime win).

Ella Fitzgerald recorded George Gershwin‘s classic “Nice Work if You Can Get it” in 1959. It’s a song that’s been tackled by a ton of greats, but few nailed it like the Queen of Jazz.

Now it’s your turn. Let us know in the comments below how you think Brees will perform in Week Four.