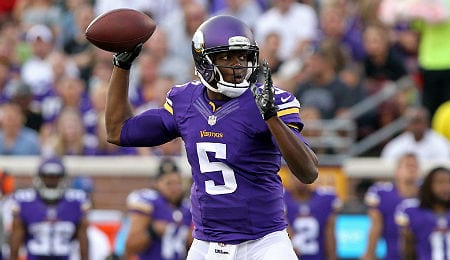 Teddy Bridgewater has cracked our rankings this season. (Dynastyfootballwarehouse.com)

Welcome to the 2015 RotoRob NFL Draft Kit. Over the next few weeks, we’ll be releasing an array of cheat sheets. So while Matt Flynn gets his walking papers from the Patriots, let’s review the top 21 quarterbacks in Fantasy football.

Quarterback is the most vital position in the NFL, yet in recent years teams have had a harder and harder time finding true franchise players at this position. Still, it’s a fairly deep position from a Fantasy perspective, so if you want to wait to draft one, that might be a prudent strategy. Having said that, we are in the later stages of the careers of Drew Brees, Peyton Manning and Tom Brady, so the guard is definitely changing somewhat. To wit, Andrew Luck — who we ranked 12th heading into 2014 — wound up being the top performer last year, but we’re expecting a healthy Aaron Rodgers to edge him out this season. After those two top, however, things get a little messy. There are lots of very serviceable options that will definitely produce for you, but asking them to carry your Fantasy football team? Maybe not.

Some key questions heading into the 2015 season: Can Russell Wilson graduate from game manager? How much does Tom Brady have left in the tank — especially after he serves his Deflategate-related suspension? Can Carson Palmer pick up where he left off before getting hurt last year? Who will be the first of the next wave to prove themselves as Fantasy start worthy?

1. Aaron Rodgers, Green Bay Packers (3): Despite another amazing season, Rodgers disappointed his owners in December. He stayed more or less healthy last year, throwing his most passes since 2012. The best part of Rodgers’ season was his stinginess of getting picked, tossing his fewest interceptions for a full year ever. There’s a reason this dude accounts for about an eighth of the team’s salary cap.

2. Andrew Luck, Indianapolis Colts (12): The Colts are pretty much guaranteed to be a solid team as long as they have franchise QB Luck. He gives them a chance to win every week and the durable signal caller just keeps getting better every year. Last season, Luck set new personal bests in completions, pass percentage, yards and touchdowns — reaching the 40 mark for the first time as he paced the league.

3. Drew Brees, New Orleans Saints (2): While many believe that Brees’ arm strength is deteriorating, the stats tell a different story as he’s been much more successful on passes that went at least 40 yards in the air over the last three seasons. Sure, his overall yardage has waned, but his accuracy improved in each of the last two seasons. With WR Brandin Cooks ready to become a star, Brees is likely to have another big year leading the Saints offense.

4. Peyton Manning, Denver Broncos (1): Manning may be slipping in popularity and skills, but his jersey is still one of the top 15 sellers in the league, for what it’s worth. He hasn’t missed a game since heading west to Denver, but last year he threw fewer passes and wound up getting picked more — not a good combo. Manning has bounced back before, so we’re not counting him out yet, but we do worry how he’ll fare now that TE Julius Thomas is in Jacksonville.

5. Ben Roethlisberger, Pittsburgh Steelers (15): Big Ben is very comfortable in a quick passing attack, and the Steelers really improved offensively under his tutelage last year. He hasn’t missed a game since 2012 and last year, the combination of longer passes and way more pass attempts led to a career high in yardage and tying his career best in TD passes. It was probably Roethlisberger’s best season in the NFL as he tied for the league lead in passing yards.

6. Russell Wilson, Seattle Seahawks (13): Wilson, the QB on our 2014 All Pro Team, knows how to win — we’ll give him that. Does that make him a great Fantasy QB? No. However, Wilson is durable and continues to get better every year, last season setting personal bests in completions and yards, although his TD total dropped. So, he continues to improve as a game manager, but as a pure passer? Not so much. The former Manning Passing Academy student may yet have upside.

7. Cam Newton, Carolina Panthers (10): We hit the mark when we advised you sit Newton in Week Three as he completed just 14-of-25 passes and failed to muster any running attack. Still, there’s a reason this dude gets as much ink as he does (and no — it’s not because he’d give the shirt off his back to a veteran… see video below). The talent is there, but his accuracy suffered last year leading to arguably his worst season yet. The good news: the Panthers may have finally amassed enough talent around Newton for him to enjoy a breakthrough campaign in 2015.

8. Tony Romo, Dallas Cowboys (18): Well, we know Romo’s a Pro Bowler in Michael Irvin’s eyes. Still, Romo runs a very solid offense that is going to give division foes major problems this year. He’s missed one game in each of the last two seasons, and as Dallas has moved towards more of a run-based offense, he’s thrown the ball less in both of these campaigns. However, while Romo’s yardage totals are decreasing, his accuracy and rating soared to career best levels last year. Obviously, Romo’s value is more certain now that Dez Bryant’s contract situation has been resolved.

9. Eli Manning, New York Giants (19): Manning got the wrong kind of attention for his off field exploits last year, but what will be really interesting to see is how he deals with the fact that he’s entering the final year of his contract. Can he consolidate what was arguably his best season last year? In 2014, he upped his yardage, reached 30 TD passes for the second time and set new personals bests in completions, attempts and completion percentage. If the lure of a new contract isn’t enough, a healthy Geoff Schwartz should help Manning to even greater heights in 2015.

10. Philip Rivers, San Diego Chargers (9): Rivers has become a mentor to other young quarterbacks around the league, a testament to what he’s meant to the game over his career. Mr. Charger has started every game for San Diego since the beginning of the 2006 season, and last year, he threw the ball more, but without the same level of success as he had during 2013, which was arguably his finest season. Despite all the trade rumours, Rivers returns to San Diego, and he should remain one of the best in the business with solid weapons like Keenan Allen, Malcolm Floyd and Stevie Johnson at his disposal.

11. Matt Ryan, Atlanta Falcons (6): In Week 16, we recommended you start Ryan. Hopefully you listened, as he enjoyed a huge game, completing 30-of-40 passes with one TD and no picks to lead Atlanta to a 30-14 win over the Saints. Ryan still has his big weapons at WR surrounding him, so while we rank him lower this year, he’s still someone you can rely on as your No. 1 QB. He hasn’t missed a game since 2009, and while he had fewer completions last year, his overall level of play bounced back. Just imagine what Ryan could do with a proper running game and an offensive line that could protect him. We’d be looking at a top five QB.

12. Tom Brady, New England Patriots (7): We’ve had our issues with Brady’s potty mouth, but the larger issue this offseason is Deflategate and the resulting four-game suspension — a penalty that Brady appealed, but lost. Brady remains a top tier quarterback all things being equal. He hasn’t missed a game since 2008, and managed to take care of the pigskin more last year. Brady is still one of the top drop-back quarterbacks in the NFL.

13. Matthew Stafford, Detroit Lions (5): The No. 1 overall pick from 2009 has enjoyed a very strong career, but has rarely broken through into the stud QB we expected he’d become. He hasn’t missed a game since 2010 and while he continued to bounce back last season, we still are waiting for him to repeat or build on his 2011 campaign. Stafford’s talent is undeniable, so is it a missing intangible that is prohibiting him from breaking through as a consistently elite pivot?

14. Ryan Tannehill, Miami Dolphins (NR): Tannehill was re-signed by the Dolphins this summer, given a US$96 million extension after improving his numbers each season of his career to date. Last year, he set a new personal best in pass attempts while topping the 4,000-yard mark for the first time. Miami has brought in offensive weapons that will work well with the kind of game offensive coordinator Bill Lazor has in mind for Tannehill, so the young QB could make an even bigger leap in 2015.

15. Teddy Bridgewater, Minnesota Vikings (NR): Bridgewater, who gained consideration as a 2014 Wire Troll All-Star, wound up as a top 25 quarterback as a rookie last year. He proved he was good enough to be an NFL starter after racking up nearly 3,000 yards in the 13 games he played. Obviously, this kid has a long way to go before he’s mentioned in the same breath as the elite quarterbacks in the league, but he showed enough promise to be included in our rankings this year.

16. Derek Carr, Oakland Raiders (NR): Carr ranks lower on many lists, but we are bullish on him taking a big step forward this year. The second year starter took over as the main man for the black and silver from Week One last season, racking up an impressive 3,270 yards in the air. Carr has a big chance to really break out in 2015.

17. Colin Kaepernick, San Francisco 49ers (20): Kaepernick doesn’t lack for confidence, but in terms of consistent results, he leaves something wanting. Last year, his pass percentage bounceD back, but he keeps making shorter and shorter passes. The fact that he reached double digits in picks for the first time last year didn’t help matters. Kaepernick is one of the more mobile QBs in the game; now he needs to learn how to play within the pocket.

18. Carson Palmer, Arizona Cardinals (16): Palmer’s injury last season created some waiver wire opportunities, but before he went down, he was enjoying a real renaissance. Arizona needs to start thinking about a long-term succession plan, but for now, he remains the main man.

19. Jay Cutler, Chicago Bears (8): Cutler heads into his seventh season with the Bears with plenty of depth among his receiver corps. Despite missing one game last season, he threatened his personal best in completions and set a new career high in pass percentage. A big part of that accuracy can be attributed to shorter plays — his average completion was at its lowest since his first year in the Windy City. Still, Cutler remains on the top players on the Bears from a Fantasy perspective.

20. Sam Bradford, Philadelphia Eagles (NR): Bradford’s injury last year had huge ramifications on the Rams, as we discussed on the Podcast. Now with the Eagles, the first overall pick in 2010 needs to stay healthy to take advantage of a glorious opportunity in the Chip Kelly offense. Bradford, who has torn his ACL in each of the last two seasons, was showing nice progress before going down just before the first half wrapped up. Perhaps relieved of waiting for their first overall pick to blow up, the Rams may be set free this season, too.

21. Andy Dalton, Cincinnati Bengals (14): It is time for Dalton to become a true leader on the Bengals and that’s going to mean figuring out a way to actually win a playoff game. The durable pivot backslid last year, and at this point, we’ll be happy if he winds up as the third best QB in his own division.

Now it’s your turn. Let us know in the comments below who you think is too high, too low or missing.