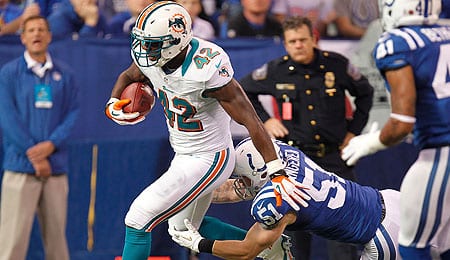 Charles Clay was an excellent scoop off the waiver wire. (Rotoviz.com)

During the NFL season we suggested many, many waiver wire options with our weekly Wire Troll column. As we scour the boxscores each week for your convenience, we emerge with some likely candidates to fill your week spots. As be it with any educated mind we have made some great suggestions and now we would like to reflect on what we feel were the best of them. Chances are if you landed a few of these players off your waiver wire early on, you did pretty darned well this season.

Andy Dalton, Cincinnati Bengals: In Week Six we recommended Dalton, a player that was mostly drafted as a second QB. Recently, he has received much criticism but the third year pro that is affectionately known as “the Red Rifle” will be fine. Dalton was picked 22 times this season and that is what everyone wants to bury him for. Our response to that is that he is still young and growing. Dalton’s 34 TD passes not only was the best total in Bengal history, but ranked third in the NFL in 2013 behind Peyton Manning (55) and Drew Brees (40). Need we remind you that Manning threw 23 INTs with just 26 TD passes in his fourth season? Those who criticize need to ask yourself, who is your team’s quarterback? Dalton’s ownership surged every week after we put him in the Wire Troll. He blossomed into a trustworthy Fantasy playoff option and he will certainly be a hot name next summer in Fantasy drafts.

Rashad Jennings, Oakland Raiders: It doesn’t take a genius to know that owning Darren McFadden’s backup is a smart play in Fantasy football. Considering what a dismal year it was for running backs, when we recommended Jennings in Week Five it was a gamble. He did prosper, while McFadden seemingly hid his helmet so wouldn’t have to play. While it took Jennings a few weeks to get his footing (at the same time that McFadden was losing his) he finished the season with 733 rushing yards, a 4.5 yard average per rush and six touchdowns (including two Turkey Day scores, one of which you can see in the video below). Jennings also added 36 receptions for 292 yards. He ended the season starting in over 60 per cent of leagues, while being owned in 90 per cent.

Keenan Allen, San Diego Chargers: Allen was another Week Six gem. After our recommendation, he took over and was playing like a veteran. In total, Allen finished with 71 catches, 1,046 yards for a 14.7 average per and eight TDs. He also ended the season with 100 per cent ownership. The rookie who had some health questions prior to the 2013 draft turned out to be Top 20 Fantasy receiver. In the majority of re-draft formats, Allen didn’t get a sniff this preseason. Now he has been named the RotoRob.com Fantasy Rookie of the Year and he’s certainly a frontrunner for the NFL ROY.

Charles Clay, Miami Dolphins: In Week Four we focused on Clay by saying his all-around abilities would present him many opportunities. At that point, he had 19 receptions for 203 yards. Clay finished the season with 69 catches for 759 yards and seven total touchdowns. He scored more standard Fantasy points than Greg Olsen, Antonio Gates and Martellus Bennett. Clay stepped in when the newly acquired Dustin Keller suffered a season-ending injury in the preseason, playing tight end, fullback, halfback and slotback for the Fins. Clay’s ownership base finished in the 90 per cent range, yet only slightly over half of those teams were starting him. Miami had a bottom tier offense, yet Clay prospered. Let that be a lesson for all of us going forward.

Now it’s your. Who were your favourite wire pickups of the season? Let us know in the comments below.

Tom Brady ranks fourth on our list of fantasy quarterbacks. Derek and I finally sat down and came up with our quarterback rankings. We also have a customizable cheat sheet for you right here. How much do you love us? 1. Carson Palmer — Right, right. This is blasphemy. How can the Golden One not […]